Enisa Eminovska has been confronting gender inequality for most of her life. She characterizes the Roma culture in Macedonia, where she grew up, as “extremely patriarchal and conservative.” When, at the age of 13, her desire to play sports provoked an extended family meeting on her failure to “act like a girl,” her mother had to fervently promise the family that Enisa eventually would turn into a “proper Roma woman.” Such a life would have meant subservience to and dependency on men—neither of which describe the path that Enisa forged for herself.

As she got further into her teens, Enisa learned more about the ways in which Roma girls face isolation during puberty: the sanctity placed on their virginity, the stigma around discussions of sexuality and the myriad ways in which Roma females are conditioned for their role as a wife, often to the exclusion of education and career. The more she became exposed to outside cultures, the more Enisa struggled with her identity as a Roma. In her late teens, she participated in an Open Society Foundation training session on human rights where she learned about the consequences for girls of patriarchy: school dropout, early marriage, poverty, social and political exclusion, and more.

Ablaze with this knowledge and each in a similar conundrum about “how to simultaneously be a successful Roma woman and a successful human woman,” Enisa and 12 other young Roma women decided to launch a public campaign to counter patriarchy within the Roma community. Unsurprisingly, they were met with fierce resistance and widespread ridicule, but they persisted nevertheless. Eventually, Roma youth in seven other eastern European countries invited Enisa and her peers to visit and mentor them on how to open such discussions in their own Roma communities and wider societies. Having helped to create “a whole generation of Roma feminists,” Enisa proudly reports that women’s rights issues in these countries can now be widely discussed without taboo. 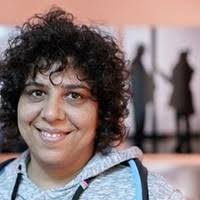 Enisa went on to work for nearly two decades providing gender-based violence (GBV) response and prevention services for humanitarian, human rights and development organizations across Eastern Europe. She joined International Medical Corps in Ukraine a year ago to “fill a gap” in our GBV work, originally planning to stay for a short contract, but deciding to stay longer after “falling in love with the team and the program design.” International Medical Corps’ Ukraine team implements GBV programs in hard-to-reach villages that experience extremely harsh winters, and is currently the only humanitarian organization providing comprehensive GBV services in conflict-affected rural areas of Ukraine.

Rates of intimate-partner violence are especially high in a culture that celebrates hyper-masculinity—a form of machismo being exacerbated by conflict, economic uncertainty and high rates of alcoholism. Enisa says that the hardest minds to change, however, often are those of women, as they have been taught all their lives to conform to norms that put them in a submissive position at home, in their community and in society as a whole. Many Ukrainian women see sex as a marital duty and believe that rape is not possible in marriage, often telling Enisa that they find it easier to endure sexual abuse in the bedroom than to confront a violent and aggressive partner in front of the children, particularly if he is drunk.

Because the women we work with rarely report abuse for fear of punishment and lack of trust in institutions, Enisa and her colleagues are working on ways to help women safely report, such as national hotlines, mobile protection teams and police channels. We also provide GBV treatment and psychosocial support for survivors, and engage community mobilizers who speak with women confidentially and refer them to appropriate services.

But the success of such programs largely depends on changing attitudes and behaviors that engender male dominance and norms that enable men to abuse their power. As such, we offer psychoeducational programs for both men and women that help raise awareness of the consequences of GBV, challenge harmful gender dynamics and empower community role models. Enisa emphasizes the importance of breaking down the notion that men are “protectors” of women—a notion that simply enforces patriarchy—and instead promotes the need to create a system of individual and collective accountability to eliminate violence against women.

GBV prevention and response work can sometimes be maddeningly slow and difficult to measure, because it involves changing attitudes conditioned over generations, in an environment where traditional gender roles are deeply embedded in personal identity. But Enisa finds much hope in the ways in which she and her colleagues have been able to spark meaningful conversation, particularly among younger generations. She says, “By the end of our curriculum, we do hear that we have made people think about things, question how they do things, talk to each other and encourage others to speak up when they hear ‘jokes’ or see harassment.” Ultimately, she feels, “If we manage to get you thinking, questioning and reflecting, then we have achieved our goal.”

Enisa would be the first to admit that sometimes an effort to smash the patriarchy feels instead like a slow chipping away—like wielding a tiny hammer against an ancient glacier. But in Enisa’s relatively short time on earth, she has helped to create seismic shifts within her own culture and across Eastern Europe, growing only stronger and more convicted as she has moved forward. And as she continues to fight the forces that violate and oppress women and girls worldwide, she remains ever-ready to build something stronger in the place of what crumbles.