When the earthquake and tsunami rocked northeastern Japan on March 11, a small group of students at Ridge Elementary School in New Jersey started drawing pictures to show their support to children whose lives were impacted by the disaster. It wasn’t long until the spontaneous project spread across the entire school. In the end, Ridge Elementary School students created more than 200 drawings for the children of Japan.

A mother of a student soon contacted Emi Samata, International Medical Corps’ logistics officer in Japan, to see if there was a way to get the drawings into the hands of children in the affected area. International Medical Corps was deeply touched by the students’ compassion and with the help of local partners, was able to connect Ridge Elementary with an elementary school in Kesennuma City.

A city in the deep northeast of Miyagi Prefecture, Kesennuma was devastated by the tsunami. One month after the disaster, 988 Kesennuma City residents were confirmed dead, and another 413 were still missing. Today, some 2,000 citizens are still living in one of the city’s 47 evacuation centers.

Kesennuma Elementary School’s principal graciously accepted the opportunity for his students to receive drawings from children in the United States, and in July, Samata visited the school to distribute all 200 pieces. She was initially concerned about the tone and mood of the school and community following the disaster, but Samata’s worries dissolved as soon as she arrived at the school.

“The children at Kesennuma Elementary school were unbelievably energetic,” said Samata. “[T]hey were boisterous and smiling from start to finish. When I told them that I’d brought them some drawings from children in America, they screamed with delight. They bombarded me with questions like, ‘Where is America?’ and ‘How do you say thank you in English?’”
After handing out the drawings to the children, Samata gave each child a new box of crayons and a sheet of drawing paper. She asked them if they wanted to draw something for the American children in return.

They jumped to the task.

“Even those children who were shy at first and didn’t know what to draw gradually became engrossed in the activity,” said Samata. “Some of [them] borrowed books from the teacher to look up what the American flag looked like or how to write the alphabet.”

A few of the children drew fish, a nod to what life was like in Kesennuma City before the tsunami. The city was Japan’s busiest port for mackerel and swordfish, but most of the infrastructure was lost in the disaster. The majority of adults are now without jobs.

“One boy told me that his father was one of those who were now unemployed,” said Samata. “When I saw him write ‘Kesennuma sardines (a type of fish) are delicious!’, my chest swelled and I had to choke back tears.” 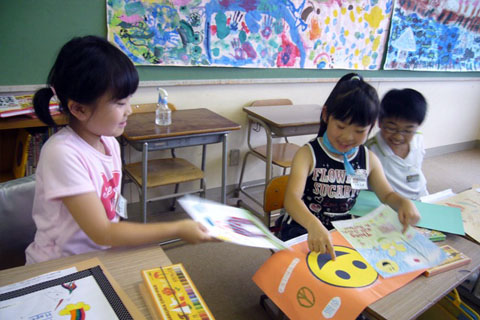 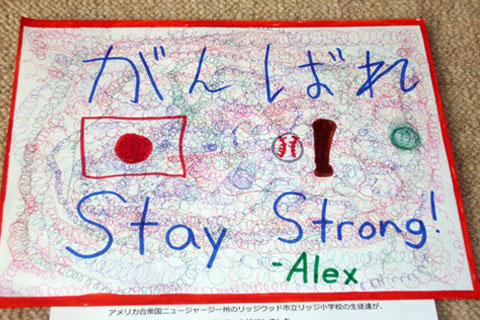 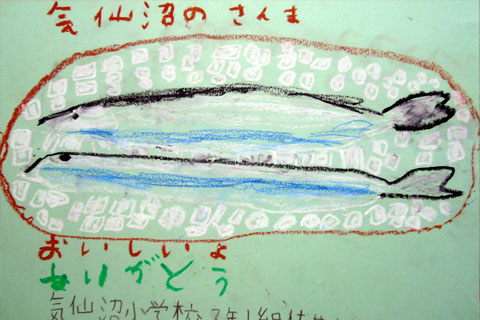 The school principal, Mr. Sato, stopped by the classroom to thank Samata, International Medical Corps, and Ridge Elementary School for making this opportunity possible for his students. “After the disaster, so many people gave us support and sent us supplies,” he said. “We really want to thank these people with all our hearts. But every time we receive something, we vividly remember that day of the disaster. And we feel the pain. We are grateful for the support, but we can’t stay mourning forever. We need to move forward.”

“One thing I noticed is that, after the disaster, the children started to talk to us more than they used to,” Mr. Sato said. “I think this is a sign that they’re still anxious. They’re still afraid. But these children are also working hard to move forward.”

He also said that the disaster made them reconnect and appreciate the land that they live on. “Before the disaster, we used to spend money on buying lots of sweets for the children and taking them on day trips to Sendai city,” Mr. Sato said. “Ever since the disaster, we have started making rice balls and taking the children to climb the mountain behind the school grounds. We have returned to our roots and are trying to learn more about our local environment.”

Samata was deeply moved by the resilience of Mr. Sato and his students. “I felt like I was given so much energy and courage from the children of Kesennuma, more than I could ever express in words,” she said. “During my visit, I was able to feel that deep connection between people, and I felt like my heart and spirit have been cleansed by the experience. I came back to Tokyo with a renewed desire to appreciate what I have now and to live every day to its fullest.”

One Kesennuma student aptly wrote on his drawing to a child in New Jersey: “Thank you for the support. I’ll do my best.”