Burn injuries in the United States are usually easily treatable with cool water and a first aid kit. But in the developing world, millions of impoverished women and children each year suffer debilitating injuries or die from burns. 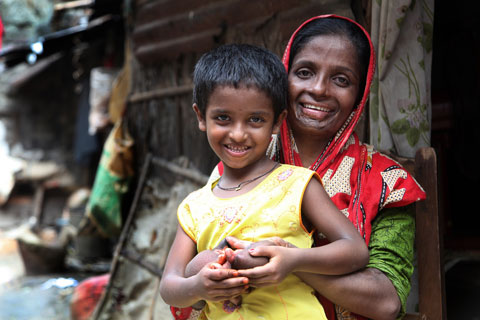 More than a billion women still use open flames to cook for their families and to heat and light their homes. Accidents are commonplace. In developing countries, severe burns affect nearly seven million people a year – particularly low-income women and children – according to the World Health Organization’s Global Burden of Disease statistics.

More women worldwide are severely burned each year than are diagnosed with HIV and TB combined. South Asia is at the epicenter of the burn crisis, where more children die from severe burns than from HIV/AIDS, malaria and respiratory disease combined. Burns are India’s third leading cause of burden of disease, with more than 3 million people burned each year.

Burn survivors often are stigmatized and shunned, hindering their ability to be productive citizens. In some cases, burns also represent a human rights issue, especially for women and girls in South Asia where fire and acid attacks are used to brutally disfigure them.

What’s more, there is a vast shortage of doctors, surgeons and facilities for burns in developing countries; when care is available, few poor people can afford it. Without access to adequate care, even fairly minor burn injuries can needlessly cause permanent disabilities. A burned foot, for example, might attach to the shin as the wound “heals” and the skin contracts, making it impossible to walk. A hand might tighten into a fist, making feeding oneself difficult.

Severe burns leave victims with disabilities that cost more than $80 billion a year in lost wages and skills; 95 percent of that economic burden occurs in developing countries, undermining economic and social development where it is most needed.

It was not that long ago when home and tenement fires were tragically commonplace in the U.S. Even in the 1960’s, fires were a much larger problem than they are now. However, significant advances have been made in fire safety and treatment just in the last 50 years. Now, only 5 percent of all burns worldwide happen in developed countries.

Vulnerable people without access to adequate health care should not have to suffer with deformities or life-threatening injuries caused by severe burns. Burns can easily be prevented and treated through simple surgery that corrects disabling injuries and saves countless lives.

Solutions exist, and we want to bring those solutions into action. Our organizations are banding together to save lives and create safer households in these developing countries. International Medical Corps and ReSurge International aim to create burn prevention programs, increase access to medical care for burn survivors, and build local surgical capacity and training programs for burn treatment. We hope that our work can help save millions of women and children from suffering and dying needlessly.

Responding to the Earthquake in Central Croatia At least seven people were killed after a 6.4 magnitude earthquake struck...

Throughout our 36-year history, International Medical Corps has faced some of the toughest challenges imaginable. We’ve worked in conflict...