With the support of the British government Department for International Development (DFID), International Medical Corps and the American University of Beirut (AUB) recently organized two training sessions for Syrian refugees working or volunteering for various local and international non-governmental organizations in Lebanon. During the week of January 26-30, 2015 entitled “Introduction to Humanitarian Systems and Project Management Cycle” and another training session February 2-6, 2015 entitled “Introduction to humanitarian principles and participatory program implementation for community workers.” International Medical Corps sent invitations to nongovernmental organizations asking that they nominate participants for the training, and 46 Syrian aid workers were selected. The participants were divided into the two training sessions based on their knowledge and experience.

By building the capacity of Syrian refugees in terms of emergency response and management of development programs, International Medical Corps hopes to assist Syrians to take a more active role in the current response, expand their skills, gain employment and become future leaders in the field of relief and development.

International Medical Corps signed an agreement with the American University in Beirut which designed the syllabus, selected trainers and conducted the training in one of their local classrooms. 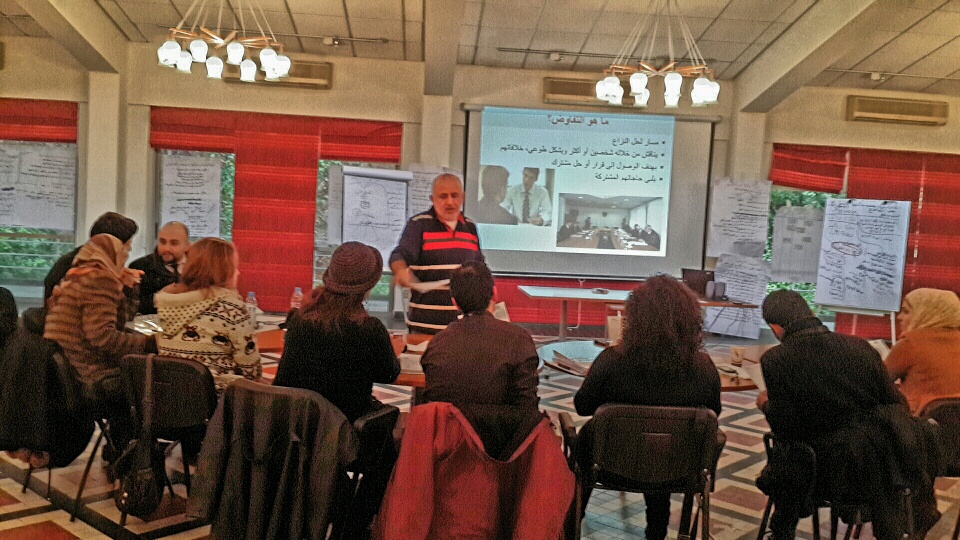 Nizar Rammal gave a session on negotiations techniques and explained why it is an important skill for aid workers, “They have to negotiate with their team, their beneficiaries, the donors and other actors to best serve their community.” When asked about how participants reacted to the workshops, Rammal replied, “I was amazed by their serious involvement and commitment. Syrian participants are more engaged than other participants from other countries because they feel deeply connected to the humanitarian situation they are living in.”

26-year-old Samir* is a volunteer with a local non-governmental organization in Lebanon. He fled Suweida in southern Syria and switched his career from a writer to a volunteer humanitarian aid worker. “I think the workshops were very useful because as a Syrian, I have dreams but I don’t know how to concretize them. It is easier for me now to plan and organize myself. Project planning and strategy building topics gave me skills that I could use even in my personal life,” said Samir.

Zahra*, 33, ran away from the bombing and fled her village near Hassakeh with her two children 18 months ago. She was an English teacher in Syria but preferred to help her community by doing humanitarian work after arriving in Lebanon. “I already have some experience in humanitarian work since I was volunteering for Iraqi refugees who fled their countries and settled in Syria few years ago. Now I, myself, am a refugee,” Zahra said. “I enjoyed the training because I had many questions for the trainers. I shared my experience and at the same time learned new methods especially in project cycle that I will put into practice,” she said.

Tarek* was studying medicine when the crisis in Syria interrupted his career ambitions. “Humanitarian work was imposed on me. I was a student at the faculty of medicine. But one day a bullet was thrown right next to our home. My family and I preferred to flee Syria and seek safety in Lebanon,” remarked Tarek, who especially liked the techniques and role plays used in the training. “I found workshops to be interactive and helpful. We were sharing our short experiences in the field which was interesting. Trainers also used games which reinforced our knowledge and skill use.”

Martine Nejem is another trainer who was impressed with the dedication shown by the participants. “The discussion levels are much higher than with other non-Syrian groups whom I trained before,” Martine said. “They use practical examples because they are living the crisis now. Most of the cases they mentioned relate to early marriage, children education and hygiene. Some of the participants live in informal tented settlements and they talk about daily living concrete issues.”

Diana Dagher stated, “The workshops were successful in that they gave participants new concepts in project management. Syrian refugees who attended the training had no vision of humanitarian response whatsoever; they were thrown in the field because of the situation. Based on the participants’ evaluation and the organizers’ observations, there is a need to invest in these people and expand the program to give more in-depth skills in leadership, communications, program management and other skills.”

Since its inception in 1984, International Medical Corps has been committed to building the capacity of devastated communities so that they can recover, rebuild and become self-reliant.