Donate Now
“Without the clinic many would have died; it would have been hell for these people”
Donate
January 27, 2014
CAR
Written by Laura Jepson

Violence across the Central African Republic (CAR) has resulted in a fifth of the country’s population displaced from their homes and 2.3 million people in dire need of humanitarian assistance. Almost half a million people are displaced in the capital Bangui alone, the majority of which are sleeping in overcrowded camps.

Father Innocent, originally from Nigeria, has been working in the Central African Republic for six years. He is currently the Priest at St Bernard’s in Bangui, where thousands of families have sought refuge and where International Medical Corps is running a clinic providing primary health care to 250-300 patients per day.
Father Innocent shares his experiences and thoughts on the recent crisis with me…

“I was preparing for mass when I heard lots of noise. I went outside and there were lots of gunshots and people running down the street. Everyone started to come into the church. When it was full, people started to fill the compound. By the end of the day there were 5,000 people here. That is how it was. After the fighting on the 25th, there were 15,000 people here. People still feel insecure at night; anything can happen. People still have fear.”

“It would be dangerous for Muslims to come back here as there would be revenge attacks. The wounds are very fresh. It will take a long time for them to heal. People feel insecure with the presence of armed groups from Chad and Sudan. Only when they leave will things change.”
“But the atrocities that were committed here, they are not common to the Central African culture. I have a Muslim as a neighbour, he is a good friend. Some of my best friends here are Muslims. There are many cases like this. Christians and Muslims have been living and working together for many years. But it [the recent fighting] has caused people to be manipulated.”

Normality has returned to the heart of the city of Bangui, with the streets busy with people, cars and traders once again. Since the announcement of Catherine Samba Panza, Mayor of Bangui, as the new interim President for CAR, security in Bangui is slowly being restored. Father Innocent continues:

“The situation has dramatically changed after the election of the new president; there was a feeling of relief among the people. After the election, no-one spoke about her religion or where she came from. The number of people sleeping here has greatly reduced since then – there are about 6,000 sleeping here now – and I believe it will continue to go down. A lot of work needs to be done to correct the wrong opinions here. There has been a lack of logic and reason and part of our work is to sensitize the population. We are all brothers and sisters. We are all one.” 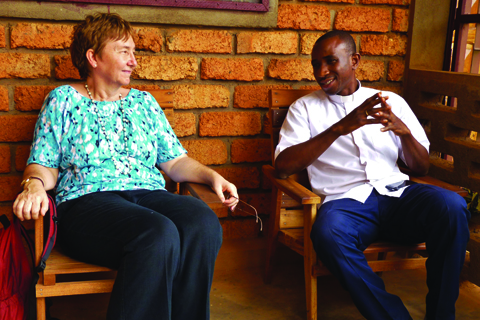 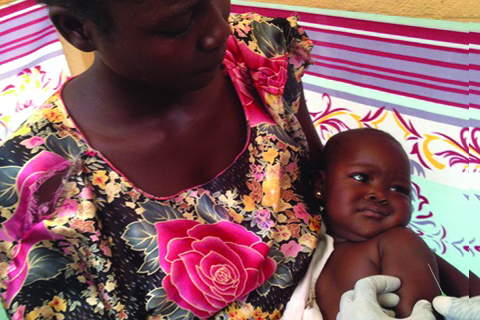 Without this clinic many would have died…

Since 15th December, International Medical Corps has been providing primary health care to the displaced families at St Bernard’s through its clinic. The team treat on average 250-300 patients a day, a third of which are children under 5. In total, the team of doctors, nurses and midwives have conducted over 8,500 consultations, provided 600 pregnant women with antenatal care, and delivered 50 healthy babies.

Father Innocent says:
“The International Medical Corps’ clinic is the only place these people can get services for free and many of the nearby clinics are closed. Without this clinic many would have died; it would have been hell for these people”