A year later, we remain in the region, helping residents of Puerto Rico and areas of south Florida recover and rebuild for a safer future. We also provided several months of emergency relief to citizens of Dominica in the immediate aftermath of Hurricanes Irma and Maria.

Hurricane Irma was recorded as the 11th most intense hurricane in the Atlantic basin, maintaining maximum intensity for 37 hours and hitting the Caribbean the week of September 5th. Hurricane Maria followed less than two weeks later, traveling over Dominica on September 18th as a Category 5 storm, and later over Puerto Rico on September 20th.

Help survivors in crisis around the world. Give now.

All agricultural crops, 100% of medical facilities and 98% of homes in Dominica damaged by the storms

Over $51 billion in damages estimated across the Caribbean 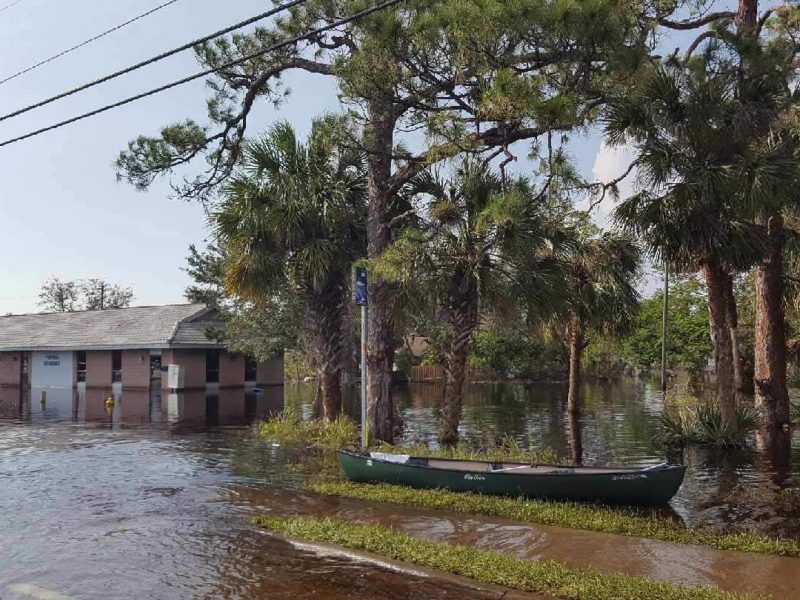 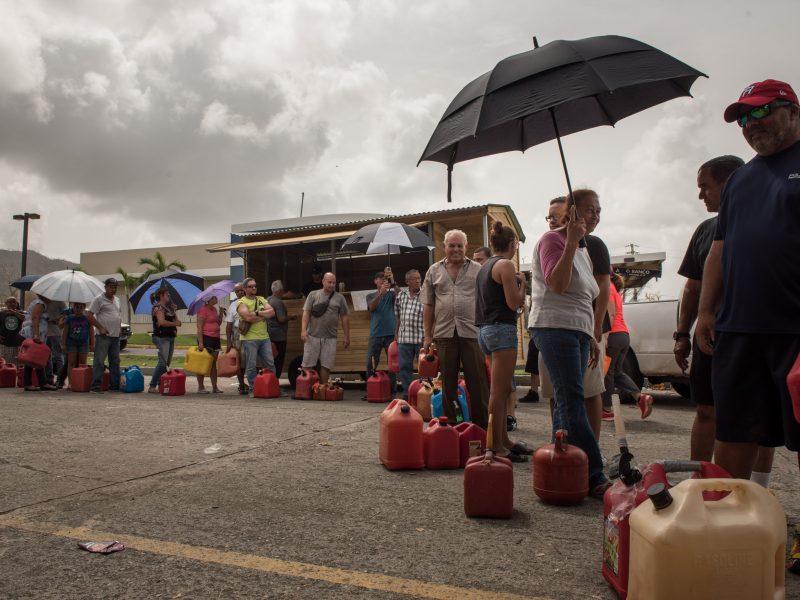 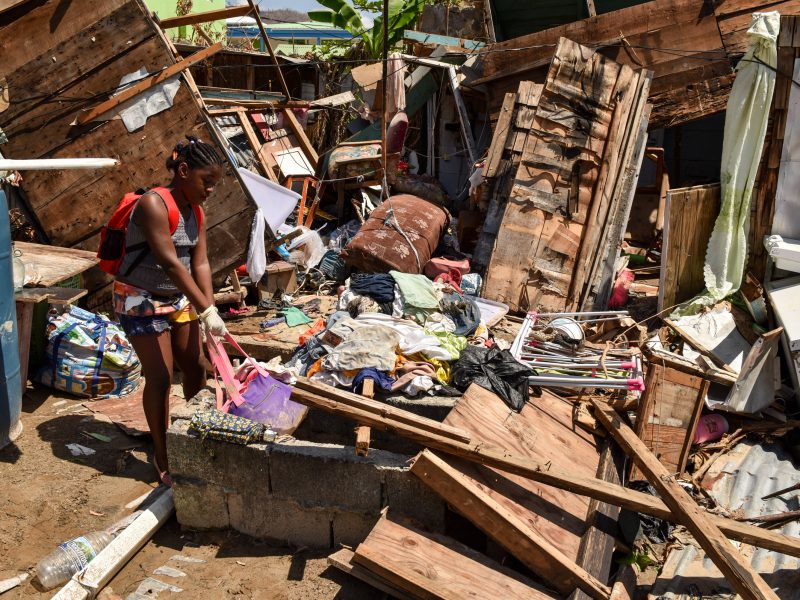 Hurricane Maria: A look back at our Puerto Rico response

Less than two weeks later, Hurricane Maria followed. Both storms were catastrophic to the island, home to 3.4 million U.S. citizens—leveling homes, destroying health facilities and damaging critical infrastructure. It took nearly a year to restore electric power to all the homes and businesses following the storms, which took out 80% of all power lines and flooded most of the island’s generators.

International Medical Corps arrived in Puerto Rico within days of Hurricane Maria and today continues recovery work in collaboration with La Asociación de Salud Primaria de Puerto Rico (ASPPR), a network of 76 health clinics focused on providing care to low-income families across the island. We are currently working on a long-term project to strengthen the island’s emergency response system. In December 2017, we expanded our efforts to help Puerto Ricans access healthcare through mobile medical units, which are providing home visits for patients in hard-hit communities who are unable to travel to health facilities for treatment.

As immediate relief efforts have shifted to recovery, International Medical Corps continues to provide power, clean water, communications and cash grants to 26 health facilities and local clinics, which have reached more than 63,000 people.

Primary Healthcare
Primary healthcare became harder to access in the aftermath of the hurricanes, as demand for urgent care spiked, crowding out time for treatment of more routine chronic conditions. International Medical Corps addressed this gap by partnering with five federally qualified health centers in Puerto Rico to increase community outreach in remote areas. In total, we deployed 20 volunteer doctors and nurses in six teams to support mobile medical centers across the island, providing consultations for nearly 1,000 patients in 46 municipalities, known as barrios. This support also helped give local health workers—many of whom had been responding nonstop since the storms hit—a break.

Disaster Recovery
Puerto Rico’s power supply was fully restored only recently, nearly a year after Hurricane Maria hit—and it remains fragile. Many health clinics have resorted to limiting their hours of operation or providing care in smaller spaces that can be powered by a portable generator. International Medical Corps has provided generators to seven clinics and San Juan-area hospitals that would otherwise have had severely limited operating capacity, or would have closed down completely. The generators provided an additional 1,800 clinic hours of service.

Maintaining adequate refrigeration for life-saving medications, especially those for chronic care and critical vaccines, has been an ongoing challenge. Our team continues to support the supply of medications across the island, especially those that require cold storage and transport.

Water, Sanitation and Hygiene (WASH)
Without electricity, Puerto Rico’s residents were unable to pump water into their homes for cooking, bathing or toilet-flushing. Though water services have largely been restored, significant health concerns remain, due to a lack of reliable drinking water in several municipalities. International Medical Corps has provided 500-gallon capacity water bladders to six health facilities to help increase access to potable water. We have also distributed nearly 15,000 hygiene kits, as well as wound care kits, solar lights and other supplies, to help families stay healthy in the aftermath of the hurricane.

Long Term Capacity Building
International Medical Corps continues to support the health and medical needs of Puerto Ricans still struggling to recover from the hurricanes, working to ensure a stronger, safer island. Together with the Primary Care Association of Puerto Rico (ASPPR), we have embarked on a $1.3 million, 13-month program to integrate community health centers into the island’s emergency response system, as a critical step to reduce the deaths and injuries that could occur in future disasters. We are assisting ASPPR with funding to hire full-time emergency managers who can create an emergency preparedness program that will benefit all member health centers and deliver mental health training to healthcare workers.

Nearly a year after hurricanes Irma and Maria cut a path of destruction through the Caribbean in September 2017, International Medical Corps continues to support thousands of those in Florida affected by the powerful storms.

In and around Fort Myers on Florida’s west coast, we work with a local network of 30 clinics in that reach 80,000 underserved men, women and children. In the Mimi/Dade County areas on the Atlantic coast, we continue to provide no-cost medicines to a network of clinics that serve vulnerable families, ensuring that they continue to receive care for chronic diseases like diabetes, and easing their financial burden as they recover and rebuild in the wake of the storms.

In the immediate aftermath of the storms, with many clinic staff members displaced from their homes, International Medical Corps provided sanitation facilities enabling them to return to work. We also helped restore power to a clinic in Bonita Springs that serves some 30,000 people.

After the initial emergency passed, International Medical Corps worked with the state’s Primary Care Association and its Department of Health to develop additional preparedness programming for the current hurricane season. Among the steps undertaken:

Child in a shelter in Puerto Rico

In Puerto Rico, as of November 7, only 40% of power has been restored and coverage is uneven and unreliable. A significant portion of the population do not have access to water. Those with water are being told to boil or purify their water before drinking it.

Actress Tara Summers, together with International Medical Corps, raised funds to bring 700 solar-powered lamps to Puerto Rico. She and our team distributed lamps and visited hospitals and clinics in remote towns hard-hit by the storm.

Damage is widespread in Dominica

One-hundred percent of health facilities and 98% of homes were damaged as a result of Hurricane Maria in Dominica. (Photo Ken Cedeno)

A clinic in Dominica

A woman hanging clothes to dry

On September 27, the International Medical Corps emergency response team traveled outside of San Juan to assess the needs of rural clinics following Hurricane Maria. Damage was seen along the way, especially to trees, lights, and power poles as well as this overpass. Photo: Ken Cedeno

Dr. Rob Fuller and Maria Rodriguez, director of Concilio de Salud Integral de Loiza Hospital, right, speak with the person at the pharmacy window. One major concern is the supply chain for medicines and consumables, which was disrupted by the storm, a challenge made more complicated by the lack of fuel on the island. With the exception of one, International Medical Corps was the first organization to visit the clinics to understand how they are functioning after Hurricane Irma. Photo: Ken Cedeno

International Medical Corps Emergency Response Team member Carrie Vopelak meets with staff of Concilio de Salud Integral de Loiza Hospital. Another issue is staff welfare, as many have been displaced by Hurricane Maria and all are struggling to get fuel, water, and other basic necessities for themselves and their families. Photo: Ken Cedeno

Damage is seen to a patient room at Hospital Menonita de Caguas following Hurricane Maria. The hospital lost half of the inpatient rooms due to wind damage. Photo: Ken Cedeno

Waiting in line for gas

Crowds of people wait in line for gas at a Shell station in San Juan Puerto Rico. Fuel is a major challenge on the island following Hurricane Maria. This is true for civilians as well as health facilities, which are dependent on generators for power. Photo: Ken Cedeno

Damage from Hurricane Maria is seen upon landing at Luis Muñoz Marin Airport near San Juan, Puerto Rico. International Medical Corps’ emergency response team arrived on the island September 25 and have been meeting with hospitals and clinics to understand their needs and provide assistance. Photo: Ken Cedeno

International Medical Corps volunteer physician, Dr. Rob Fuller of UConn Health, looks at the needs of a clinic outside of San Juan. Without electricity, clinics are relying on generators for power, which often have to be shut off periodically to prevent overheating. It is also very difficult to get the diesel fuel required to run them. Photo: Ken Cedeno

People line up to get water on the side of the road on the eastern side of Puerto Rico on September 27. In addition to fuel, clean water and food are in short supply, compounding the suffering of Puerto Ricans after Hurricane Maria. Photo: Ken Cedeno

Rachael Rodriguez fans her son as her daughter Naomi looks on while they wait to board a United Airlines humanitarian flight leaving Luis Muñoz Marin Airport near San Juan, Puerto Rico on September 25. International Medical Corps emergency response team members flew in on the humanitarian flight, which then evacuated Naomi, her family, and other Puerto Ricans off the island. Photo: Ken Cedeno

Help survivors in crisis around the world.