Now in its ninth year, the Syrian war continues to inflict incomprehensible levels of suffering on civilians and fuel the largest displacement crisis in the world today. An estimated 500,000 have died. More than 6 million Syrians are displaced inside the country, while another 5.6 million have fled to the relative safety of other countries.

International Medical Corps works in Syria as well as in Turkey, Jordan, Lebanon and Iraq—the four countries hosting the highest number of Syrian refugees—to provide medical care, mental health and psychosocial support, gender-based violence prevention and response, and other vital services to Syrian families whose lives have been shattered by conflict.

Help Relieve Suffering in Syria and Around the World 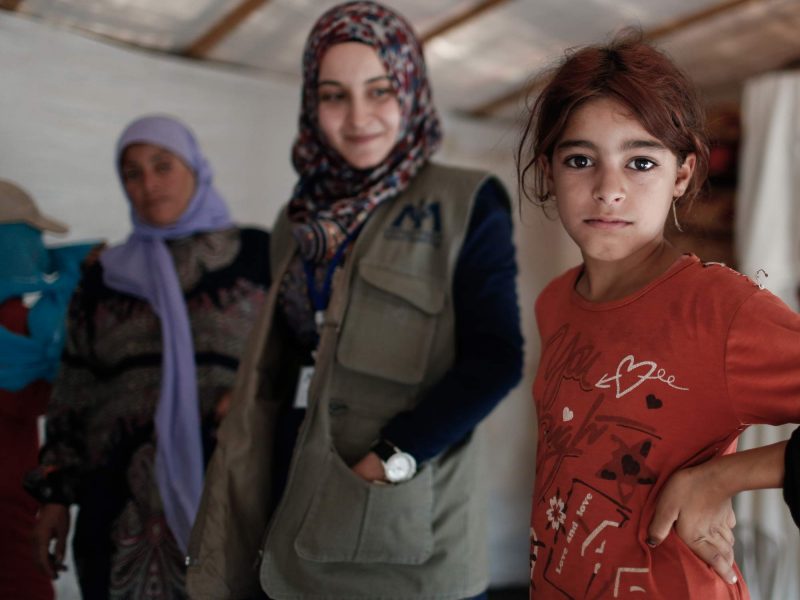 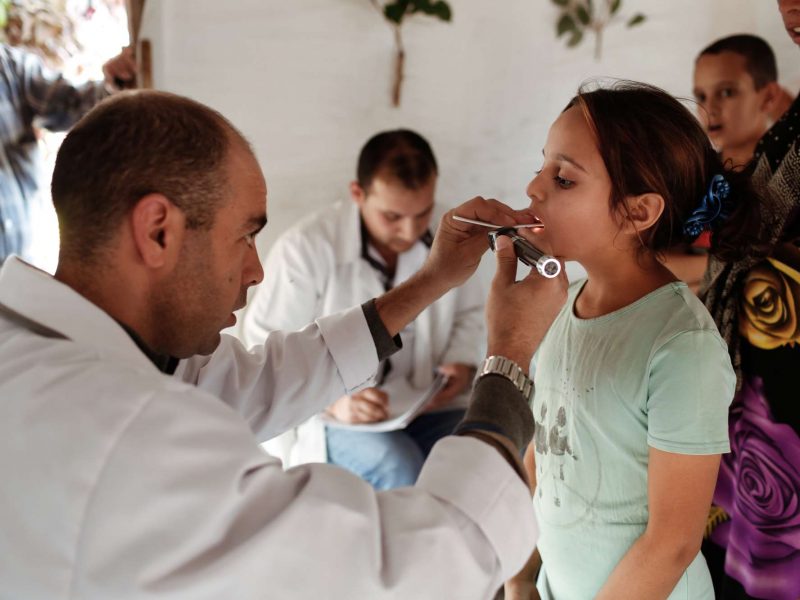 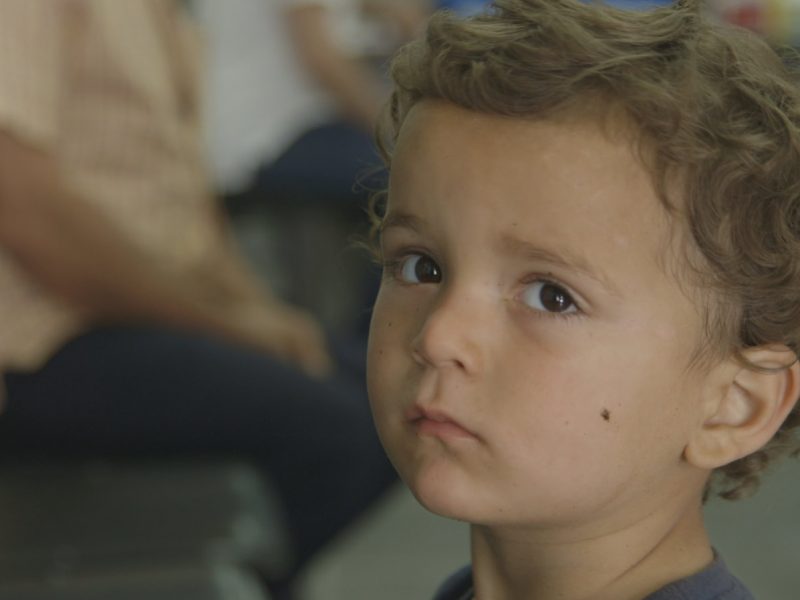 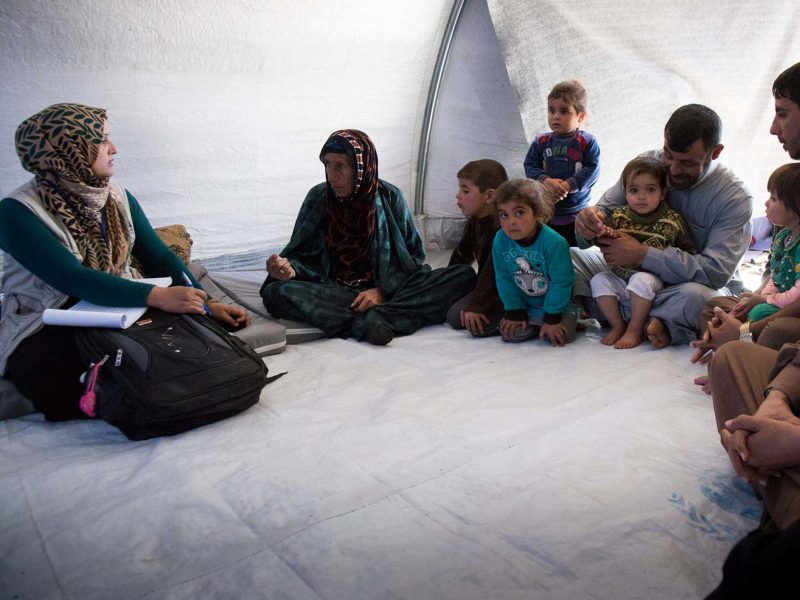 Syrian refugees have fled to the safety of other countries

Half of the displaced are children and youth

Violence, barbarity go on unabated, but global outrage wanes as the world begins to view the century's bloodiest conflict as Syria's new normal

More than 13 million people are in need of humanitarian assistance. International Medical Corps has been on the front lines of the crisis.

Fighting continues to endanger civilians and force them from their homes.

The war has decimated much of Syria’s infrastructure.

More than half of Syria’s pre-war population of 21 million has been uprooted from their homes, fueling the largest displacement crisis since World War II.

The war has taken a tremendous toll on Syria’s healthcare system, damaging and destroying hospitals and clinics, and causing countless doctors and nurses to flee the country. Health facilities that are still functioning struggle with limited supplies and equipment, as well as shortages of qualified staff, who can be overburdened and unable to deal with the surge in caseloads when nearly clinics are damaged.

The war has exposed Syrian families to extreme levels of violence. They have lost loved ones, livelihoods and homes. To help Syrians cope with emotional distress and trauma, International Medical Corps integrates MHPSS into our healthcare services. Our Jaramana Recreational Activity Center (RAC), in Rural Damascus Governorate, and a mobile MHPSS/protection team offer a wide range of recreational and educational activities to provide psychosocial support to children and families. This support includes programs specifically designed to engage youth, as well as a rehabilitation program for children with development delays and disorders.

International Medical Corps includes protection principles in all of our programs, delivering focused gender-based violence (GBV) prevention and response programs to address specific protection needs in Syria and to provide care and support for survivors. We provide case management in healthcare clinics, and conduct awareness and information campaigns in open communities, displacement shelters and at the Jaramana RAC. In addition, in collaboration with accredited institutions, International Medical Corps offers vocational training and business startup kits to vulnerable displaced and local populations, helping to help build resilience and restore livelihoods.

We offer MHPSS at both International Medical Corps and Ministry of Health facilities. A multidisciplinary team comprising psychiatrists, psychologists, mental health nurses and case managers provides mental health services and psychosocial activities. We engage children and youth with mental health concerns in structured activities to relieve their concerns and improve their psychological and social well-being. In addition, International Medical Corps runs a safe space for women and girls in Azraq camp where protection measures are in place to help prevent GBV.

International Medical Corps provides a comprehensive package of essential services in Lebanon, home to nearly 1.5 million Syrian refugees. We support a network of more than 50 primary healthcare centers throughout the country that offers a wide range of curative and preventive healthcare through routine physical examinations, pediatric check-ups, growth monitoring, immunization and reproductive health services, including maternal health and family planning.

We integrate mental health services into primary healthcare in a culturally sensitive manner to improve access among Syrian refugees and residents of the local Lebanese host community. Mental health case management teams, consisting of social workers, psychotherapists and psychiatrists, work with local partners to ensure that services are available for those in need of psychiatric, psychological and social support. At the community level, case managers play a key role in raising awareness of the importance of mental health and in providing information about available support services.

Psychological Toll of War and Uncertainty

Like more than 11 million other Syrians, Hana and her family lost everything to the country's brutal and unending war, fleeing their home in the western city of Homs about four years ago. More than half of Syria's displaced have sought shelter elsewhere in the country while the balance are scattered across the globe, unsure of when they will reunite again, if ever.

Stories from the field

The Intimate Hardships of War

Last year, I visited Azraq Refugee Camp in Jordan as part of a project that aimed to highlight maternal...

Irbid: A Sanctuary for Syrian Mothers

The UN’s refugee agency recently warned that, for the first time since records began, the number of people who...

My trip to Jordan with International Medical Corps gave me an opportunity to see a side of the Syrian...