The first days of a newborn baby’s life can be a magical time—a time for joy, family celebration, hope and thanks.

But it is also a fragile time for both mother and child—a time when dangers such as infection or poor-quality care can very quickly turn joy into heartbreak. Statistics show that risk to a child’s life will never be greater than during its first 28 days—the four-week span known in the medical world as the neonatal period. If born prematurely, a weakened newborn can be overwhelmed by the simple challenges of life.

A World Health Organization/UNICEF study released in the fall of 2018 found that globally in 2017, 1 million newborns died during their first day of life, while nearly another million newborns failed to survive their first week. In total, almost half (47%) of all under-5 child deaths occurred during those brief but crucial first 28 days. 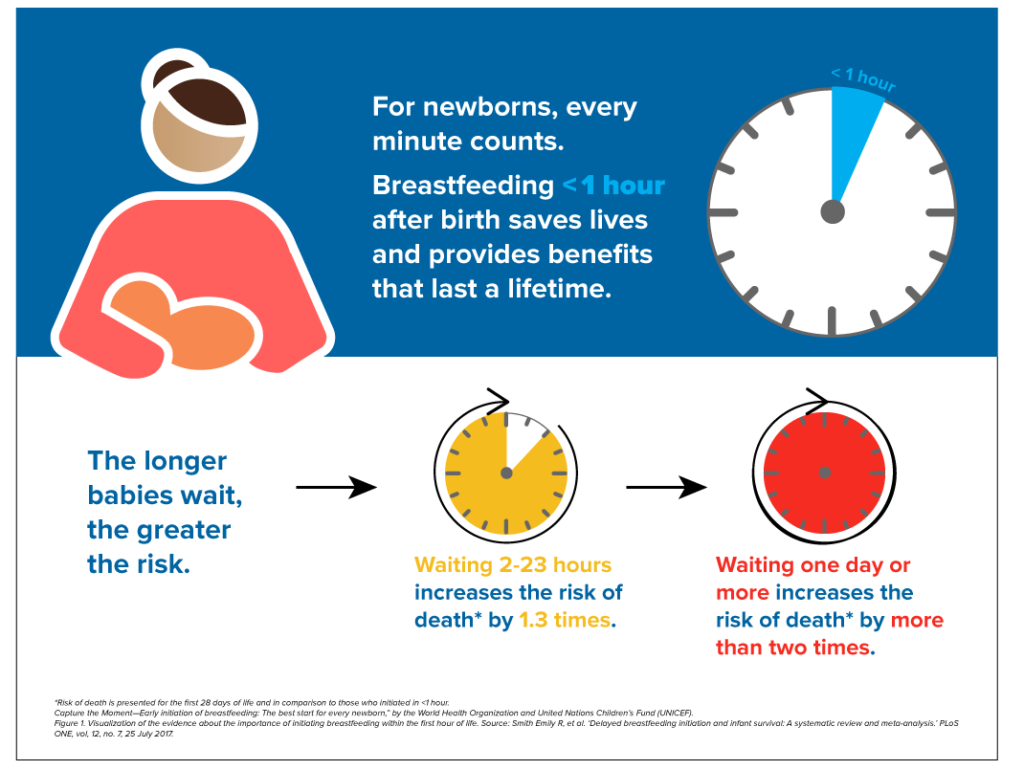 The neonatal period is also a crucial time for decision-making that can have lifelong consequences for both mother and child. Few such choices are more important than those surrounding breastfeeding—essentially, whether or not to start and, if so, how and when to begin. Prevailing sentiment among healthcare specialists seems clear.

“The best possible start in life for any newborn is to breastfeed at the earliest opportunity, ideally within the first hour,’’ notes International Medical Corps Public Health Advisor Dayan Woldemichael.

A second World Health Organization/UNICEF document, Capture the Moment, published in July 2018, states that “putting newborns to the breast within the first hour of life is critical to newborn survival and to establishing breastfeeding over the long term. When breastfeeding is delayed after birth, the consequences can be life-threatening—and the longer newborns are left waiting, the greater the risk.

The Benefits of Vaccination

Vaccination is another early health-related decision that parents invariably face during the neonatal period. The first of a three-dose series to protect a child against hepatitis B (HBV-1) is recommended at birth, while the initial dose of oral polio vaccine (OPV-0) is also recommended at birth for children born in Nigeria, Pakistan and Afghanistan, where the disease remains endemic. Vaccination to prevent tuberculosis is also routinely given at birth in countries where there is any possibility of contracting the disease.

Robinson notes that in Nigeria’s northeastern Kano and Borno states—where International Medical Corps is one of several organizations supporting a polio-eradication initiative—we encourage our volunteer community organizers to attend frequently held “naming ceremonies” traditionally held for newborns. There, they can enquire about the vaccination status of both the newborn and dozens of other children who attend these ceremonies with adult family members. These volunteers are key in raising awareness among caregivers about the health benefits that such vaccines offer.

Where feasible, immunization teams accompany the community volunteers to the naming ceremony, to provide on-the-spot vaccinations for those requesting protection.

With so much at stake, it is little wonder that in many parts of the world this 28-day period is surrounded by myths, tales and superstitions, as well as rites and religious ritual—some dating back to the beginning of recorded time.

In ancient Greece, any knots in the vicinity of a delivery room were consider bad luck and obstacles to a child’s birth, a belief that required unknotting the mother’s belt, wreaths on the wall or sashes of any kind. Some Muslims believe the traditional call to prayer should be the first words a newborn should hear, whispered by the father into the child’s right ear, while the ritual of shaving a newborn’s head are common in both Muslim and Hindu communities in India as signs of removing impurities.

Mothers, too, are affected—for example, sometimes they undergo a post-partum ritual of seclusion, which has both benefits and drawbacks.

Once viewed mainly as a lingering cultural tradition from earlier times, the ritual has been found to have practical benefits that can shield new mothers both physically and psychologically from many of the long-known dangers and struggles that come with their new maternal role.

But seclusion also carries risks, including limiting access to urgent medical care should either mother or child require it. The World Health Organization recommends three post-natal contacts during the first six weeks of a baby’s life, with home visits during the initial two weeks.

Seclusion was once practiced in colonial America, when new mothers would retreat from public contact as part of a rite called “lying in”, as they recovered from the birth of their child under the care of older female relatives, who also taught them the basics of early motherhood.

In today’s world, the challenge for both parents—wherever they live—is to achieve the right balance for themselves and their newborn between rituals and the social customs on one side and sound, evidence-based modern healthcare on the other, as they work to launch their child on a path to good health and a long life. Recent studies suggest just how risky even the briefest delays in starting breastfeeding can be in determining a newborn’s chances for surviving the risk-filled first 28 days and enjoying good health as the child grows.

Data from five recent studies conducted in four countries covering more than 130,000 newborns found every hour counts. Newborns who breastfed within the first hour of life have a significantly lower risk of early death even when compared to those who began between two and 23 hours of birth. Newborns who waited more than 24 hours to breastfeed doubled their risk of early death.