20-year-old Rita Acchami of the Kavre District in eastern Nepal was overjoyed when she gave birth to a beautiful set of twin girls, Ganga and Jamuna. Her initial joy was quickly followed with worrying news that baby Jamuna was born underweight. In the first few months the sisters grew together but Jamuna remained underweight. She was irritable, frail and cried constantly. At four-months-old, Jamuna had also developed diarrhea. Desperate for answers, Rita finally brought her baby to Methinkot hospital for help. 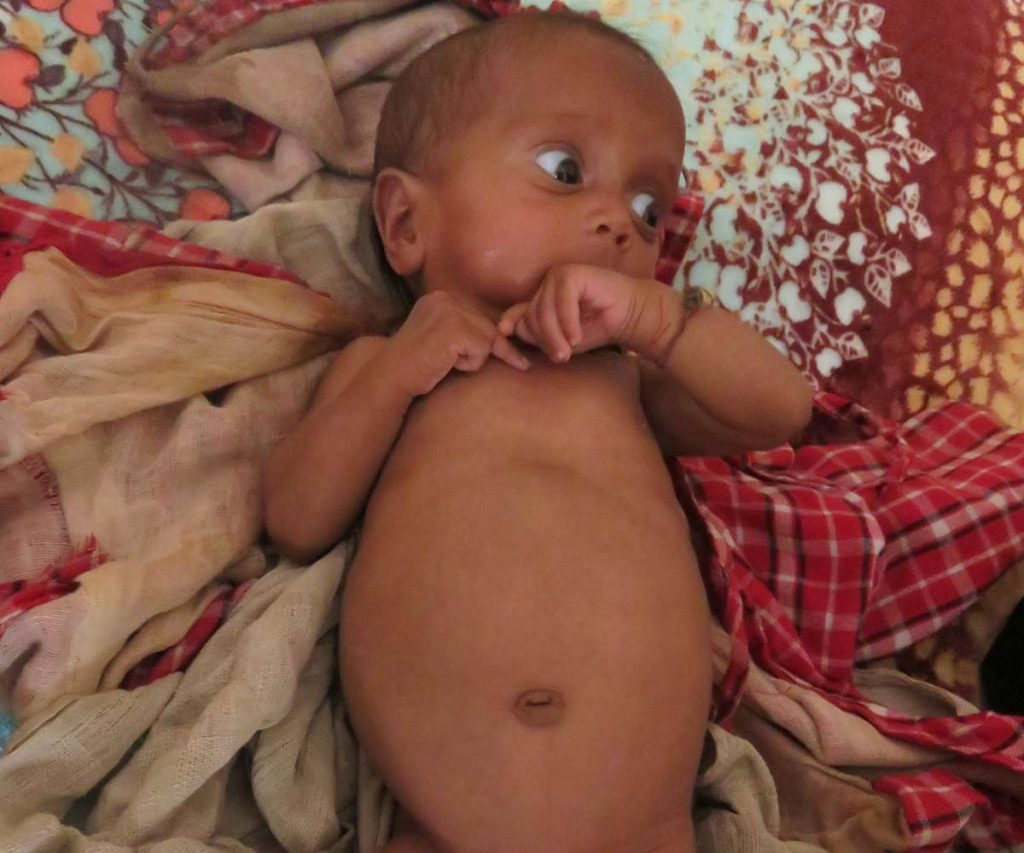 The hospital staff quickly recognized the signs of severe acute malnutrition and the need for rapid stabilization. Jamuna and her mother were referred to the nearby nutrition stabilization center, run by International Medical Corps’ in-country nutrition partner, The Nepal Pediatric Society. The staff took Jamuna’s anthropometric measurements –non-invasive assessments of a patient’s body fat composition– and concluded that while her vitals were normal she was still only six pounds and showed clear signs of dehydration, including sunken eyes and severe thirst.

The nutrition staff immediately got to work reversing the malnutrition. They began with an initial dose of oral rehydration salts for the first two hours, which stabilized Jamuna’s diarrhea. Then she was given a gradually increasing regiment of the World Health Organization’s standard nutrition formulas. The staff monitored her condition closely and waited to see some sign of improvement. As she began to stabilize, she resumed breastfeeding. With the support of International Medical Corps’ nutrition program, when she was discharged just four days later, she weighed a healthy eight pounds.

“Seeing Jamuna finally smiling again brought me such relief,” said Rita as she held her baby, who was now alert and had a healthy blush in her cheeks. The stabilization center is not only a resource for the young survivors of severe acute malnutrition like Jamuna, the mothers are also given support. For mothers like Rita who work to help support a family or travel far to reach the center, a 500 rupee daily allowance is provided to offset losses in work, and 1000 rupees are given for transportation home. For Rita, this was critical. She works long hours in a brick factory and does not have an adequate family support system. It was partially because of this hardship and its corresponding lack of resources that she was unable to provide proper nutritional support for her baby. In what is known as the intergenerational malnutrition cycle, a mother’s own lack of nutrition makes her children more likely to be born with such problems as stunted physical and cognitive development, or a low birth weight – as in the case of Jamuna.

Before returning home, Rita was also given an infant and young child feeding (IYCF) training by a stabilization nurse, training in health and sanitation and infant care training. Additionally, she was provided with counseling on family planning. A follow up was scheduled in order to monitor Jamuna’s progress and mother and daughter were discharged healthy, happy and looking forward to their next visit.

International Medical Corps is on the ground in Nepal helping the Acchami family, their community, and others like them, in the transition from relief to self-reliance. To that end, we are implementing nutrition programming in seven Nepali district hospitals. International Medical Corps seeks to partner with local NGOs to ensure a lasting and sustainable impact and in nutrition we work with Nepal Pediatric Society as our implementing partner. Together, we are running stabilization centers similar to the one visited by Rita and Jamuna at each of the seven district hospitals to provide adequate nutritional and medical treatment for children under 5 suffering from severe acute malnutrition with medical complications. Each hospital we work with services earthquake affected communities.