As a self-taught seamstress and the loving caretaker of her deceased brothers’ children, 41-year-old Sawsan serves as a constant inspiration to those around her. Sawsan* grew up within a large family in Iraq, the daughter of an ambulance driver and a stay-at-home mother. She dropped out of school at the primary level and, at 20 years old, decided to help her father and brothers with living expenses. She had little formal education and no vocational skills at the time, so she drew on her strength and determination.

Sawsan started baking and selling bread, kneading the dough with her hands and enduring the heat of a traditional oven until a neighbor suggested she try to learn to sew instead. Although Sawsan felt she was too old to learn a new skill, she borrowed a sewing machine from an acquaintance and reached out to her neighbor for lessons. Her busy neighbor only had time to show Sawsan how to thread the sewing machine, after which Sawsan took matters into her own hands. “I started teaching myself,” she says. “I started making simple things and they looked funny, but I continued and ended up saving money until I could buy my own sewing machine.”

Sawsan continued honing her new skills and started receiving jobs from shops and workshop owners, eventually becoming so busy sewing for clients that she had to turn down several offers. Soon thereafter, women in her community began asking Sawsan to teach them to sew. She wanted to share her skills, but did not have space in her house to start a workshop. Then she discovered the International Medical Corps-supported Al-Farah Multi-Service Center in Fallujah, and applied for a job as a sewing instructor.

The multi-service center, which opened in 2017, was established with support from the Government of Canada, as part of efforts to provide humanitarian assistance to conflict-affected communities in Iraq. Aside from women’s empowerment activities, the center provides essential primary health screenings and consultations, mental health case management and psychosocial support, and gender-based violence and response services, as well as community outreach.

Today, Sawsan trains women and girls through the center. “I suffered a lot while learning how to sew, so I feel for the trainees,” she says.

“I didn’t have someone to teach me and I couldn’t attend sessions, so now I want to help these women have this opportunity.”

According to Sawsan, “God sent me to Al-Farah Center so I can deliver my skills to women.” Sawsan tells us that her trainees get encouraged when they hear her story, as they believed it was impossible to learn sewing at an older age. She tells them, “If you say you will learn, you will.” Sawsan also advises her trainees to look for opportunities and not wait for them to come. “You don’t need to wait for clients,” she says. “You need to create opportunities.”

Meanwhile, Sawsan is busy caring for several of her nieces and nephews. After her brother died several years ago, Sawsan raised his then two-year-old son as her own; the boy has since grown and recently married. Sawsan’s second brother died three years ago, leaving a widow and seven children. His wid 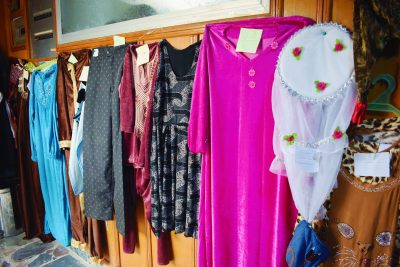 ow remarried and left the children—ranging from ages five to seventeen—with Sawsan, who has looked after them ever since. “The youngest calls me mom,” says Sawsan lovingly.

All of the school-age children are attending school, and Sawsan supports them with their studies. “Yousif is the top of his class,” says Sawsan of her six-year-old nephew. Sawsan, like everyone living in Fallujah city, was forced to flee with her family during the 2016 Iraqi military operations to retake the city from the Islamic State. Due to their displacement, her nieces and nephews lost a year of studies, but Sawsan made sure they resumed their studies once they returned back to Fallujah.

Sawsan considers raising her nieces and nephews to be her calling in life. She says she often gets sympathetic remarks from women who feel sorry for her for not getting married. But she believes that everything happens for a reason—and that she was prepared all her life to take care of her brothers’ children.

Sawsan can always be seen with a smile on her face and has an encouraging word for everybody she meets. “I advise every person not to lose hope,” says Sawsan.

“Everything happens for a reason. Hardship is a test. Things will get better. Maybe fate is decided, but we make the best of it.”

“I didn’t have someone to teach me and I couldn’t attend sessions, so now I want to help these women have this opportunity.”

2021 marked the 30th anniversary of the 16 Days Against Gender-based Violence (GBV) campaign. But even after three decades,...

Standing United Against Gender-Based Violence On November 25, we marked the International Day for the Elimination of Violence Against...