The young Syrian refugee was in labor in a Jordanian hospital when her mother came in to deliver the devastating news: her husband, two brothers and niece had died in a bombing in Syria. Faced with pushing new life into the world while experiencing profound loss, the young woman’s shrieks of physical pain turned to screams of emotional agony. She delivered a healthy baby, but promptly went into post-partum depression.

“It was a disaster,” says Dr. Diana Halaseh, the International Medical Corps obstetrics and gynecology specialist who delivered the baby. “She was crying, and we were crying with her.” 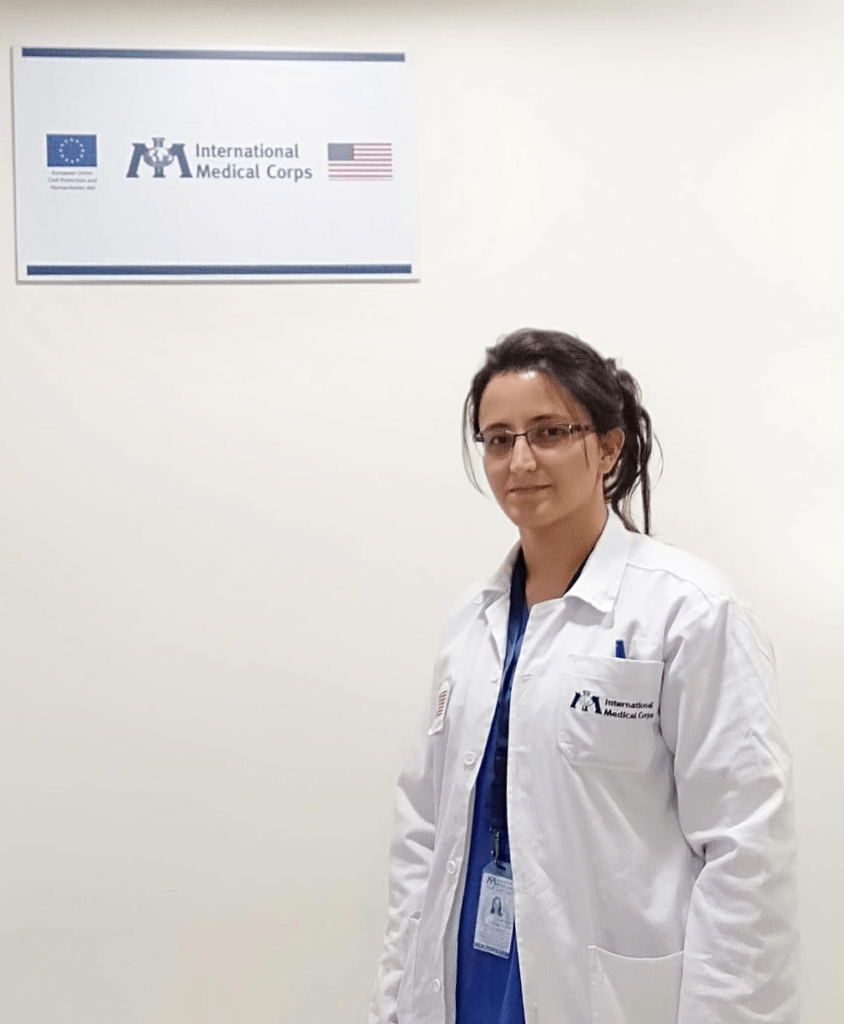 For Dr. Diana, who works around the clock delivering babies and saving mothers’ lives, this is the dramatic juxtaposition of her efforts to serve refugees of inhumane wars: she brings life and joy into the world amidst tragedy and death. She can’t help but suffer emotionally along with those she treats—all females, all poor, most of them alone and many of them physically and sexually abused—even as she remains laser-focused on the technical parts of her job. But the healing needed is inevitably more than medicine can provide—and this pervasive subtext weighs on her.

A self-proclaimed “nerd,” Dr. Diana was born in Amman, Jordan, to two pharmacists. She characterizes her childhood as “very uneventful,” and discovered her extraordinary work ethic early—studying constantly and receiving “very, very high marks in school.” She knew she liked medicine and helping people, and would often participate in volunteer activities like fixing homes for poor people. After getting her degree from Jordan University Hospital and spending five years in the army fulfilling her residency, she became an OB-GYN specialist just as war broke out in neighboring Syria.

Dr. Diana’s home country of Jordan—a tiny bastion of stability in a volatile Middle East—has been transformed by the massive influx of Syrian refugees who have flooded into the country since 2012. The plight of these refugees inspired Dr. Diana to join bourgeoning humanitarian relief efforts in Jordan, ultimately leading her to join International Medical Corps in September 2018.

That same month, we began providing free healthcare to Syrian and other refugees, along with vulnerable Jordanians, at Irbid Specialty Hospital. Dr. Diana repeatedly emphasizes the “free” part, as delivering in a public hospital in Jordan is prohibitively expensive for Syrian refugees. “They would never be able to afford what International Medical Corps provides for free—antenatal care, lab tests ultrasounds, medications and more,” she explains.

All of the women who Dr. Diana treats are extremely poor, many living in refugee camps or on farms. There is no work for them in Jordan and no end in sight to their state of limbo, making them entirely dependent on charities for survival. Many of them are divorced or widowed, having lost their husbands or partners in the war. For Dr. Diana, the “saddest” part of her job is helping young girls deliver babies. She cites the troubling issues of early marriage and early divorce, recalling a 12-year-old Syrian patient who was both pregnant and divorced—a girl whose father married her off as a child because he could not afford to feed her, only for her to be brutally beaten by her much-older husband.

“Socially, it’s a disaster,” says Dr. Diana of the situation for Syrian refugees. “But you can’t fix everything.” Still, she and her colleagues try desperately to fix what they can. “At the end of the day, we are offering medical health,” she says. “But it’s not always just medicine.”

Through our comprehensive referral pathways, International Medical Corps ensures patients in need receive mental health and psychosocial services along with primary healthcare, as well as support for sexual and gender-based violence. We also provide ongoing special care for children who have witnessed or experienced violence or abuse, are separated from their families, or have emotional distress. Dr. Diana and her colleagues try to help the many battered women they treat—such as the patient who had been beaten so badly by her husband that part of her hair was ripped out—navigate local laws and services, and teach them how to deal with abusive male partners. Through it all, she says, “we work to show kindness to our patients,” whose harsh lives often lack tenderness.

Despite the many challenges and heartbreaks, Dr. Diana emphasizes that “there are a lot of happy stories—and many happy endings.” She cites as an example the fertility patients who have waited a long time for a baby, such as the patient who had suffered from infertility for 15 years and who just delivered a healthy baby boy. “Though these women are very poor,” says Dr. Diana, “they are very happy to have a healthy baby with them.”

Visibly exhausted and in high demand—routinely working 80- to 100-hour weeks—Dr. Diana takes a moment to reflect on her life. “I like my job,” she muses. “I like that I help females and, now, refugees.” She says she much prefers her work with International Medical Corps to her private practice because “you feel you make a huge difference.”

I press her for more, fishing for joy. Her generally serious demeanor breaks momentarily as she says, blushing and giggling, “When a patient delivers a baby and hugs you and gives you a kiss, it’s a very nice feeling.” She then pauses, conflicted, as if remembering how hard this all can be: remaining optimistic in an ocean of despair; comforting the crying patients with whom you want to cry—and sometimes do. She checks her cellphone—no doubt buzzing with requests—and prepares to return to her mammoth efforts, reminding us, and perhaps herself, of the responsibility that awaits: “I’m helping to create life.”

International Medical Corps has been delivering health services in Irbid Specialty Hospital since 2018, helping to fill critical maternal health gaps for Syrian refugees and vulnerable Jordanians. We provide quality comprehensive emergency obstetric and newborn care, along with a range of prenatal and postnatal services, family planning, health education and hygiene promotion. International Medical Corps has been responding to refugee crises in Jordan since the 2003 Iraq War, and has expanded to accommodate the massive number of Syrian refugees arriving since 2012.