Donate Now
Home Is Where One Starts From
Donate
December 30, 2015
Iraq
Written by Alex Bartoloni

On August 3rd last year, 12-year-old Maher fled from his village to the Sinjar mountainside where he and tens of thousands of others sought refuge from ISIS attackers who swept up from the south to invade the region. Every person from Sinjar remembers the date, as men, women and children from each village and town in the area packed what they could carry on their backs and left their homes travelling by car or by foot to find safety.

Stranded on the mountain, surrounded on all sides by ISIS fighters, Maher, his family, and thousands of others survived for weeks without blankets or a roof over their heads. From the top of the mountain he could look down into Sinjar town as planes swooped overhead to drop bombs on those taking over the city. From the high vantage point Maher could see the flashes below from countless explosions.

International Medical Corps developed a series of comic books for children displaced by the conflict in Syria and Iraq in order to teach them important messages about disease prevention, safety in camps and about how to promote their well-being. The comic book Going Home Again tells the story of a Syrian boy named Ahmed who is forced to flee from his village after fighting breaks out and a military plane drops bombs on his neighborhood. This was the first story that Maher ever read, and when asked why he likes reading the story he said “it’s not just similar to my life, it’s the exact same.” 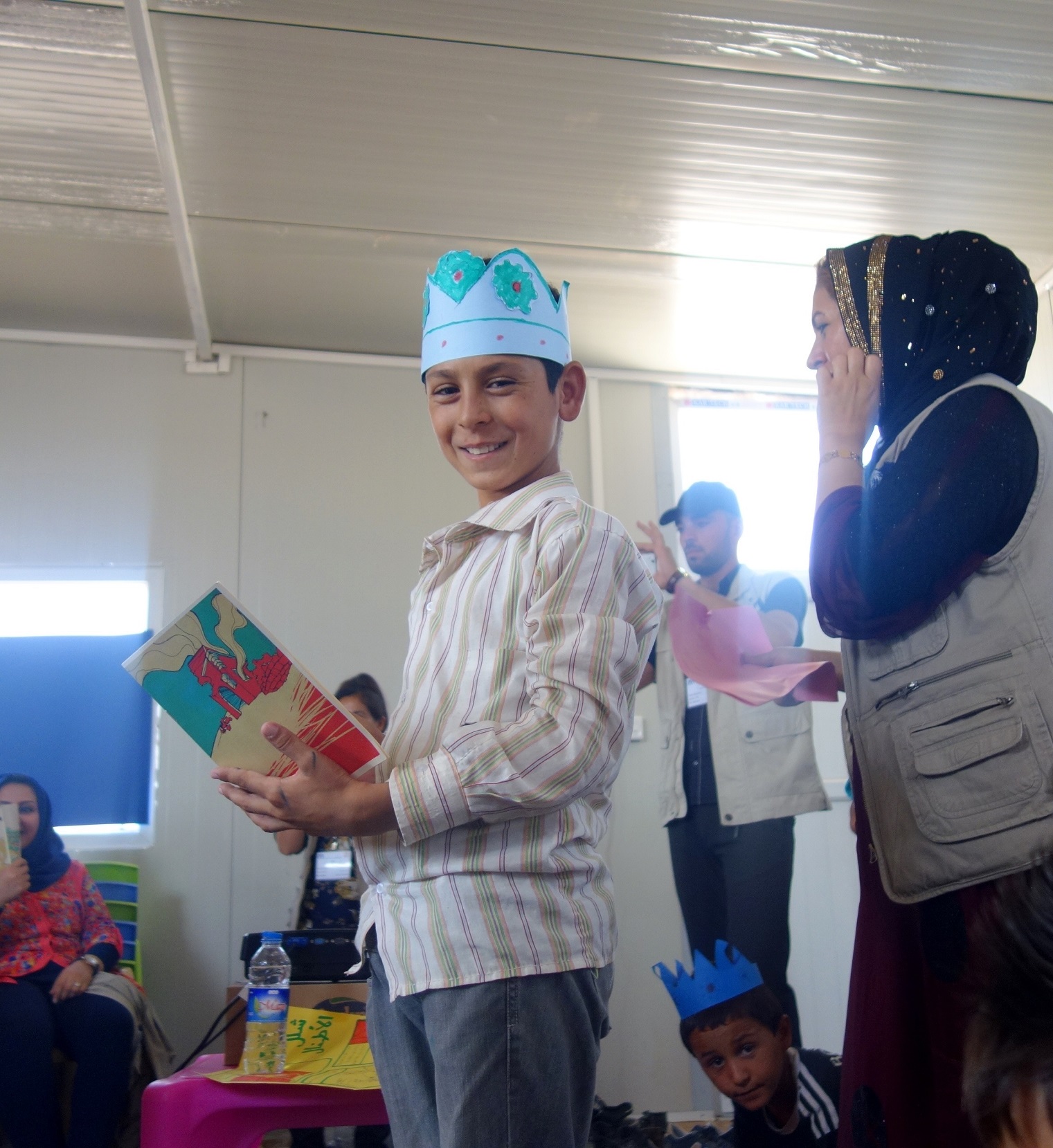 The first two comic books in the series tell stories about children facing the same problems young refugees encounter in their daily lives, introducing subjects such as child labor and displacement in a manner in which children can understand, then teaching how they can manage in these difficult times.

Another boy, Noori, was living in Northeast Syria two and a half years ago, on a wheat farm where his family had been for generations. There was frequent fighting near the village and on one afternoon Noori and his friends found a round, metallic object that turned out to be a mortar shell. The boys played with the shell as their mothers baked bread in a nearby oven, not knowing that earlier three neighborhood children had been wounded by a similar unexploded ordinance. When Noori’s family learned that their children had been playing with a bomb in their own fields they made the decision that they had to abandon their home and leave Syria.

Since then, the family has been living in a refugee camp in the Kurdish Region of Iraq where Noori attends school, and where he and his classmates were presented with International Medical Corps’ comic book and were taught about the dangers of landmines and explosive remnants of war.

The comic books were written by International Medical Corps staff and illustrated by Syrian comic book artist Diala Brisly. They were designed to include specific education messages for Syrian and Iraqi children, interwoven within a story that the children can relate to.

In Going Home Again, young Ahmed manages to survive in the dangerous city as he learns how to avoid contracting polio, the importance of hygiene and other essential health topics before being reunited with his family.

The sequel, Home Is Where One Starts From, tells the story of a brother and sister who leave Syria to live as refugees in a nearby country. Noori says that the second comic book is his favorite because he learned a lot from it, such as how to prevent contracting the skin disease leishmaniasis, and how to stay safe in the case of a fire in the refugee camp – a common concern for families in sprawling camps in the Middle East.

As the war in Syria has continued on for years, more and more families are displaced and children are unable to attend school. Throughout the crisis, millions of boys and girls have been out of school for years at a time either working to support their families or unable to find a school that will accept them – this is the “lost generation” of Syria.

For this reason International Medical Corps’ community health worker (CHW) teams across the Middle East organize educational events for children in which they present the comic book in community centers, schools, cafes, or even in people’s tents in order to explain health promotion messages to children.

The comic books are a very successful educational material for International Medical Corps’ programs in the Middle East. These children, devoid of all other forms of entertainment, are thrilled to receive the comic books and read them over and over again. The children go on to share the stories with their friends – spreading awareness about critical health education messages contained within the story – a much more effective method than a simple poster or brochure could ever do.

Even though children like Maher and Noori read the comic book because they enjoy the story, every time they pick the book up they continue to learn about topics such as how to prevent polio, or the importance of planning for a future after the war. Giving Syrian and Iraqi children a story with which they can relate allows International Medical Corps to teach about important but sometimes sensitive topics, and shows the young readers how they can manage under the extraordinary circumstances that they may find themselves in every day.