What connects us?
No matter where we come from or who we are, we are bound together as humans across space and time. We are a tapestry woven throughout this wild and beautiful earth, made up of disparate and diverse pieces that, when viewed from afar, merge into one unified image. From the most privileged to those in desperate need, regardless of color, culture and religion, we are united by our common humanity.

For 35 years, we at International Medical Corps have fought against some of the most brutal acts of violence and injustice known to mankind. We’ve had every reason to give up the fight. Instead, we’ve persevered, facing the most urgent challenges facing humanity. And each year, we’ve grown stronger and bigger, into a formidable global community of compassionate and courageous humans. 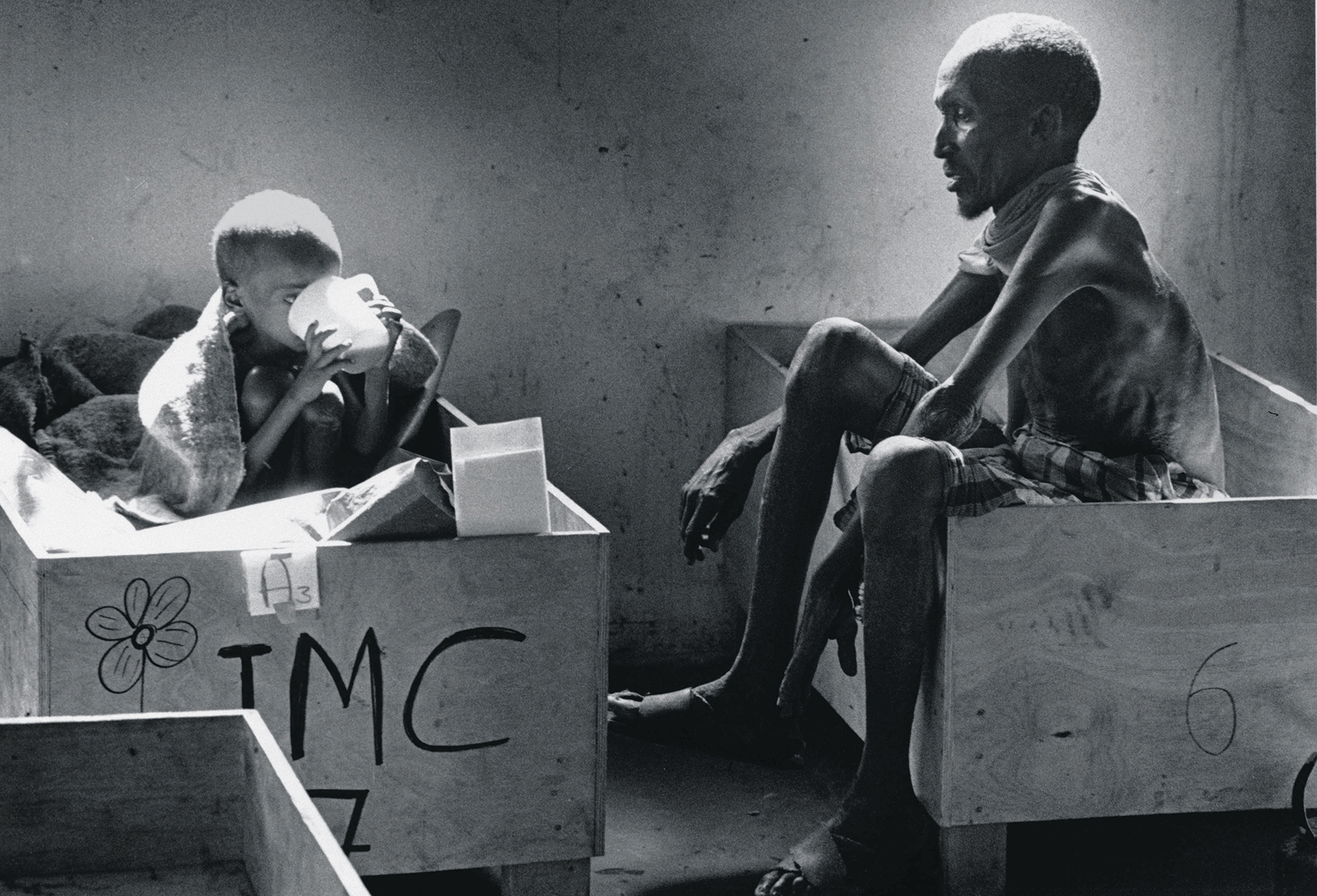 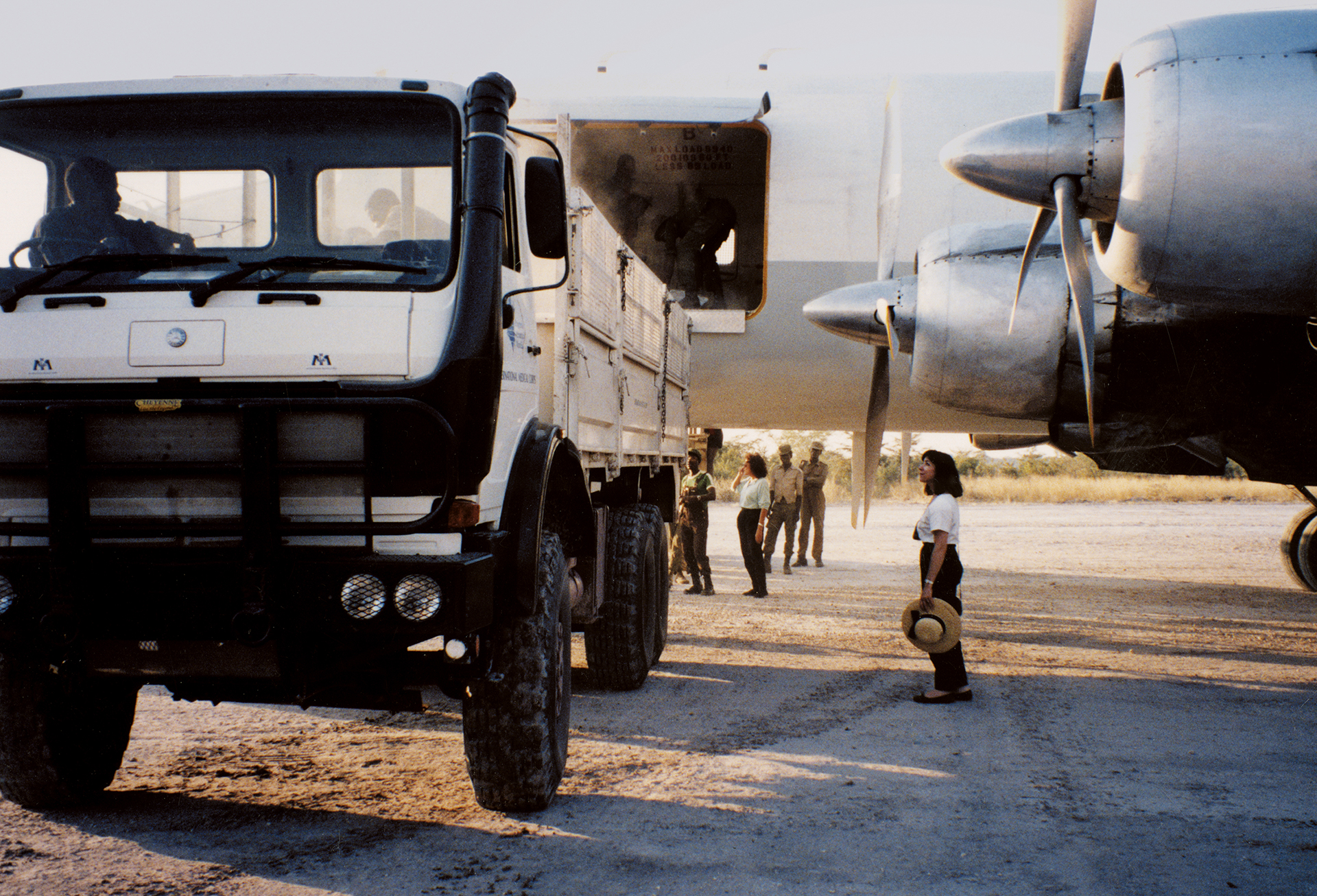 A Brilliant Mind, a Caring Heart
Our story started with a young UCLA emergency room physician, Dr. Bob Simon. With an objectively brilliant mind—graduating medical school three years early and inventing widely used emergency surgical procedures—Dr. Simon’s true legacy would be found in his heart. In the early 1980s, worlds away from his home in Malibu, the Soviet Union had invaded Afghanistan with 50,000 troops and was waging a horrific war against innocent civilians. Thousands were dying and millions were fleeing, leaving the country with only about 200 doctors. Very few in the U.S. knew or seemed to care about this healthcare crisis—but Dr. Simon cared enough to change his whole life, and the lives of millions more.

He began contacting relief agencies working in the refugee camps on the Afghanistan/Pakistan border, to see how he could help—but all of them refused to go inside Afghanistan, as it was considered far too dangerous. So Dr. Simon decided to risk his life and go on his own, becoming the first American doctor inside Soviet-occupied Afghanistan. There, he discovered children poisoned to death with gas; children with limbs maimed from explosives that the Soviets had disguised as toys; children starving to death. He secretly set up an emergency clinic and went to work, but quickly ran out of supplies and returned to the U.S. to find support. He asked 52 health organizations for help. All 52 turned him down. He testified before Congress, but his advocacy fell mostly on deaf ears.

“So I had a choice,” says Dr. Simon. “I could despair in the face of overwhelming apathy toward the plight of Afghan civilians, or I could take action in spite of it.” He chose action. And this momentum against seemingly insurmountable obstacles came to define a tenacious organization that always finds a way forward, even when others turn back.

Dr. Simon founded International Medical Corps in 1984, after selling his house in Malibu to provide the necessary start-up funds. In those early years, funds were so tight that the organization ran almost solely on the courage, empathy and generosity of its volunteers. About 100 volunteer doctors, nurses and physician’s assistants joined Dr. Simon over the course of multiple trips to Afghanistan, operating in caves, on mountainsides and underground while surrounded by aerial attacks, landmines and gunfire. Back home in Los Angeles, several more volunteers wrote letters, advocated for action and raised donations. Within two years, International Medical Corps was treating 54,000 patients per month at 24 emergency clinics in Afghanistan while training more than 200 Afghan medics to be first responders in their own communities.
This commitment to training has underpinned all of International Medical Corps’ efforts over the past 35 years. Dr. Simon understood that a group of volunteers from thousands of miles away—however hardworking and passionate—could never create results as sustainable as investing in local health workers. He and his colleagues developed an extensive emergency field-training manual that has been used by countless medics and doctors over decades, ensuring that our impact endures long after we leave. 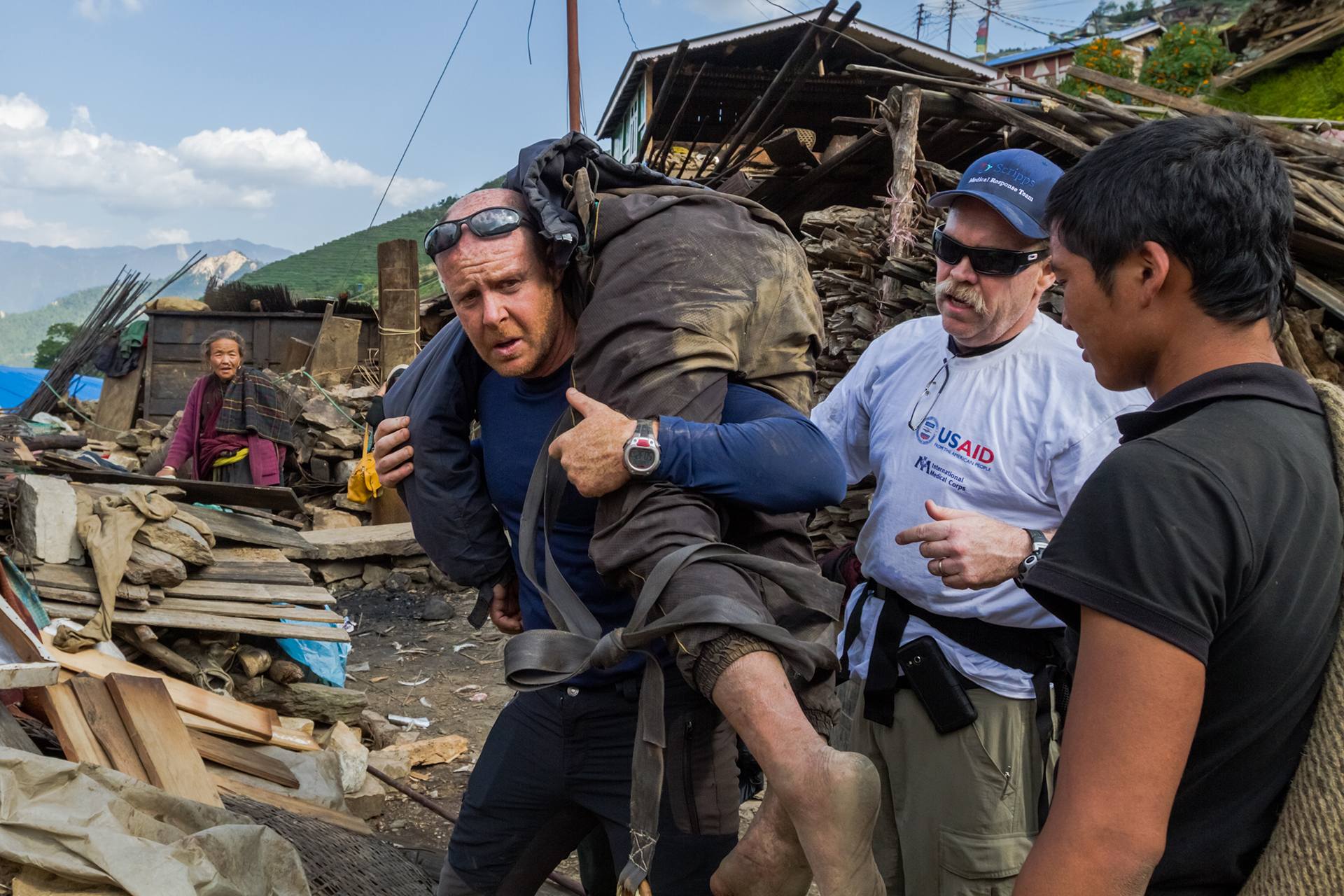 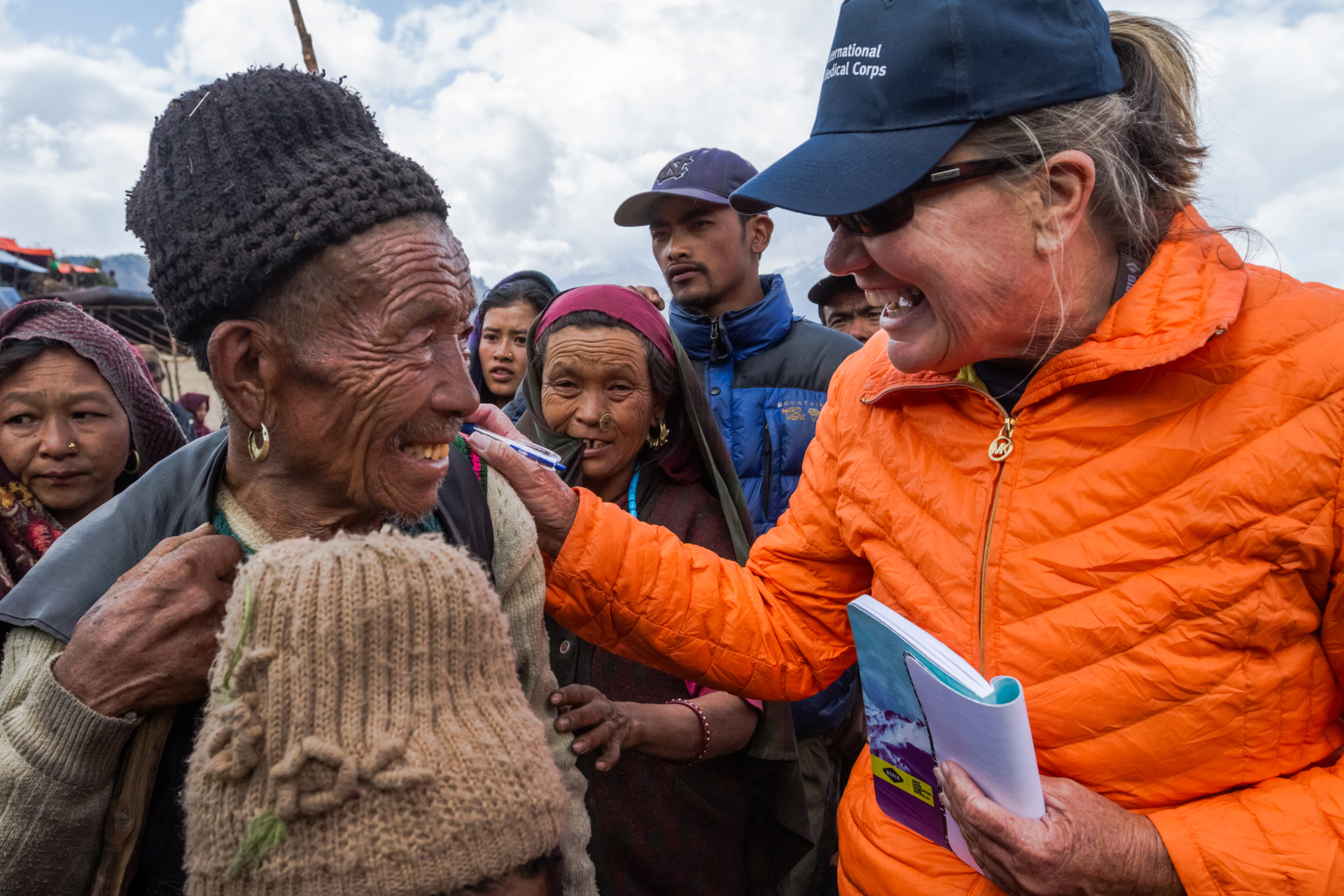 Commitment and Courage
In 1986, facing growing pains, International Medical Corps was able to hire a CEO: Nancy Aossey, a young business school graduate from Iowa who recently had moved to Los Angeles. At the age of 26, Nancy lacked humanitarian-aid experience and had never even traveled outside the U.S. But Dr. Simon recognized in her a kindred spirit: someone with a huge heart, who was motivated to serve something greater than herself.

As a child growing up in a rural American town dotted with cornfields, Nancy never expected she would one day meet an Angolan warlord in his underground bunker to negotiate vaccines for dying children. She never expected to end up in Mogadishu at the height of Somalia’s civil war, serving those starving to death in the famine, or to work in Rwanda in the midst of its horrifying genocide. But as she encountered the vast needs of humanity, she couldn’t turn away. And so, from working on the ground in many of the earth’s most dire places, to serving as its leader and visionary from headquarters in Los Angeles, Nancy has devoted her life to International Medical Corps’ mission since shortly after its founding.

She has helped to scale the organization dramatically, taking it from a small group of volunteers to a vast global network of more than 7,000 passionate humanitarians, 90 percent of whom (or more) are local—because training and capacity-building are part of everything International Medical Corps does. Under Nancy’s leadership, the organization has been on the frontlines of the world’s biggest emergencies over the last three decades, in more than 80 countries to date. We have changed millions of lives, families and communities for the better, providing services and skills that will resonate for generations to come.

All the while, our founding spirit has remained intact. We still go places others won’t go, do things others won’t do and risk our lives every day to reach those most in need. We still choose—constantly and emphatically—action over despair. And, above all else, we choose hope. For 35 years and counting, despite all the things that could tear us apart, we have relied on our shared humanity—and we will continue to rely on it, and work together, for as long as it takes to create the world that we know is possible.

Thank you for supporting us on this journey, and on the journey to come.

On the Frontlines of COVID-19 in Mali

Having worked in Mali since 2013 responding to myriad conflict-related humanitarian needs, International Medical Corps is now on the...

Being a doctor in South Sudan—a conflict-ridden, chronically insecure, abysmally poor country—is one of the most daunting professions on...

“When the Ebola outbreak was declared, community health workers came to my house to talk to me about Ebola...