Before the tragic earthquake that ravaged Nepal on April 25, Priyanka Tamang volunteered at various hospitals in Kathmandu. A nurse by training, she is young and highly motivated to serve her country.

“A few days after the main shock, my parents encouraged me to fulfil my duty as a nurse by caring for the victims,” she said. Originally from Gorkha, she is now back in her home district working for International Medical Corps.

The day I visited, Priyanka was leaving for a village in Gorkha as part of an International Medical Corps mobile physical therapy unit, which works to locate and assist those affected by the earthquakes, especially those unable to come to our new physiotherapy unit at Gorkha hospital. The dynamic trio headed out today, comprised of Priyanka and two physiotherapists, is part Nepali, part international staff. Bringing together international training and experience with nuanced, local knowledge and experience has helped International Medical Corps in all aspects of our work in Nepal.

The day started with an hour-long drive from Gorkha bazaar. In order to reach the location where the clinic would set up for the day, the team left the comfort and safety of paved roads. Amidst a hot and humid morning, villagers were plowing their paddies with buffaloes, getting ready to plant rice.

When the team arrived, they were greeted by Gopi Bahadur Thapa Magar, a teacher from a nearby community school. A sweet and sprightly man, Magar wears many hats. When he isn’t teaching English or tending his fields, he is a ‘community mobilizer’ for the local healthcare unit, which is why our teams have been reaching out to him and others like him in the areas in which we work. By working with local government officials and utilizing established grassroots leaders like Magar, we are able to better understand where our help is most needed and most effective. 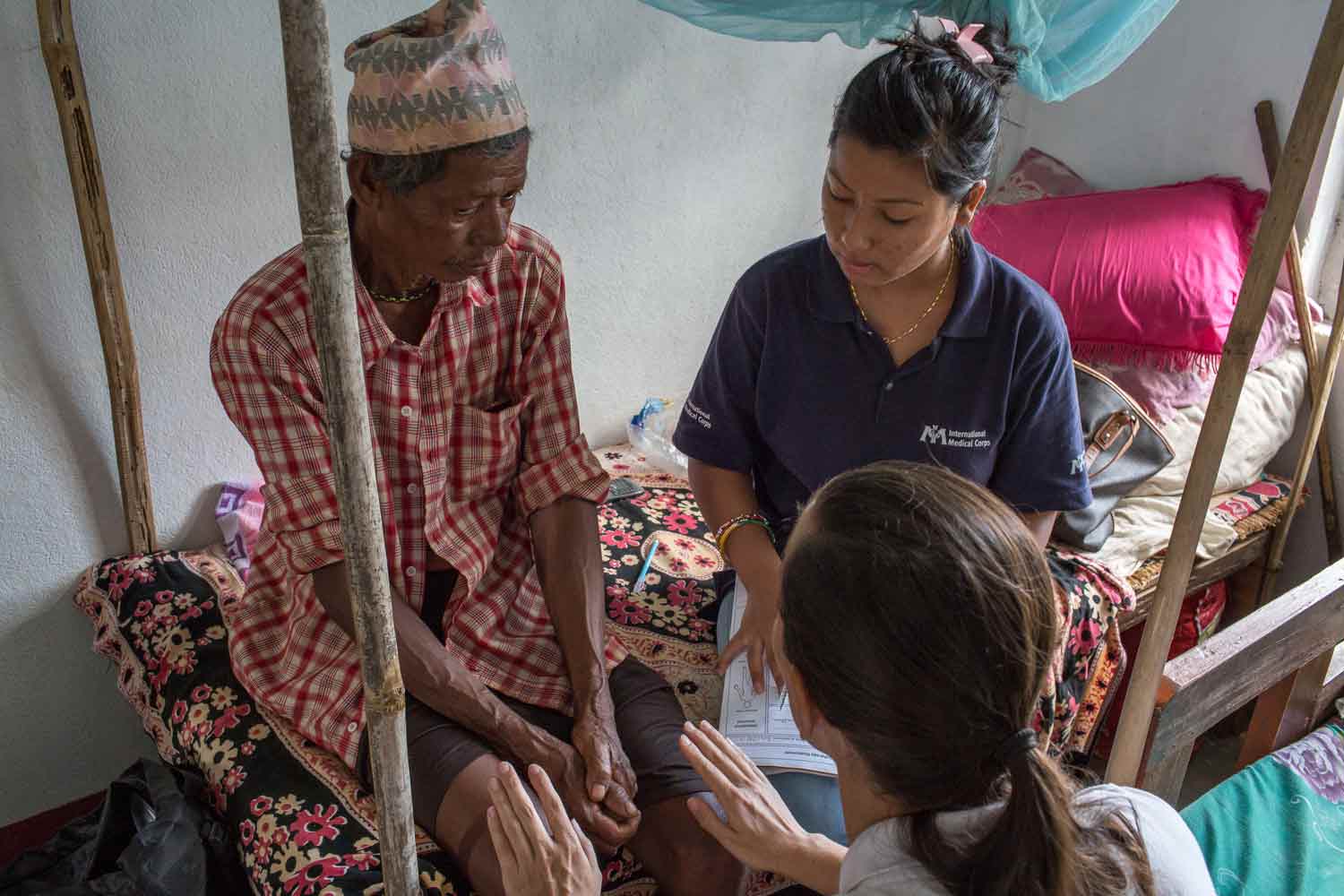 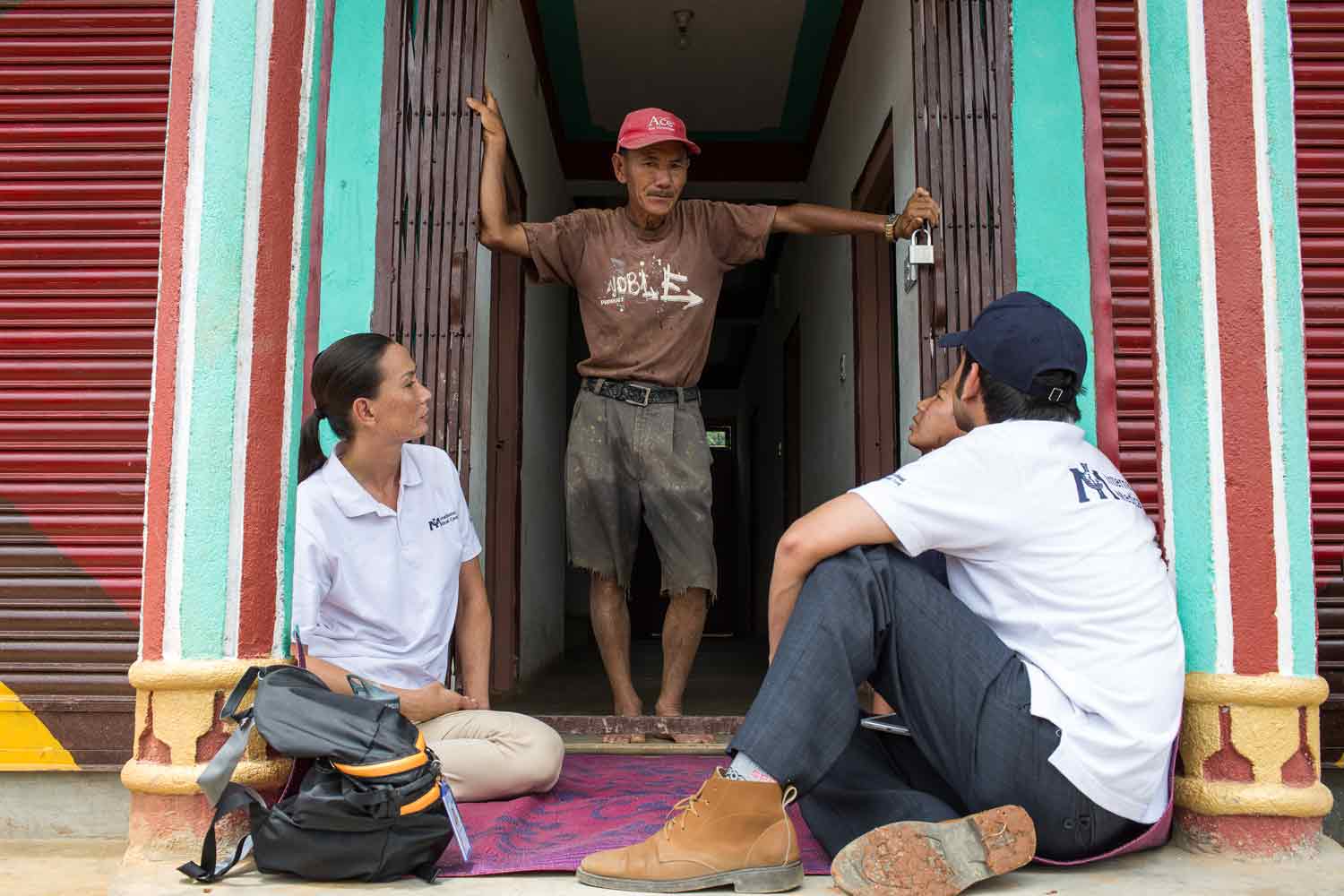 With a few phone calls, those who needed attention quickly gathered at Magar’s house. In the course of the entire day, the International Medical Corps team saw 14 patients, spending nearly 30 minutes, on average, per individual. That kind of attention is hard to find, even at private medical clinics in Kathmandu. The patients, not all of whom were injured in the earthquake, came to consult with the team for a variety of reasons, including a range of arthritic conditions.

Kalpana Kulmi brought her 6-year-old daughter to see our team because of a playground injury that included a complex elbow fracture. Little Rajkumari had been referred to hospitals in Kathmandu for treatment, as the hospital in Gorkha was unable to perform the complex procedure needed, the disheartened mother said.

In Kathmandu, Rajkumari had the surgery to repair the fracture. The cost of treatment, however, proved too burdensome for a family with a farming background.

“We had to spend a lot of money on travel, food, and medication when we were in Kathmandu,” said Kalpana, but her worries were not over. She had yet to take her daughter to the capital city for several follow-up sessions. 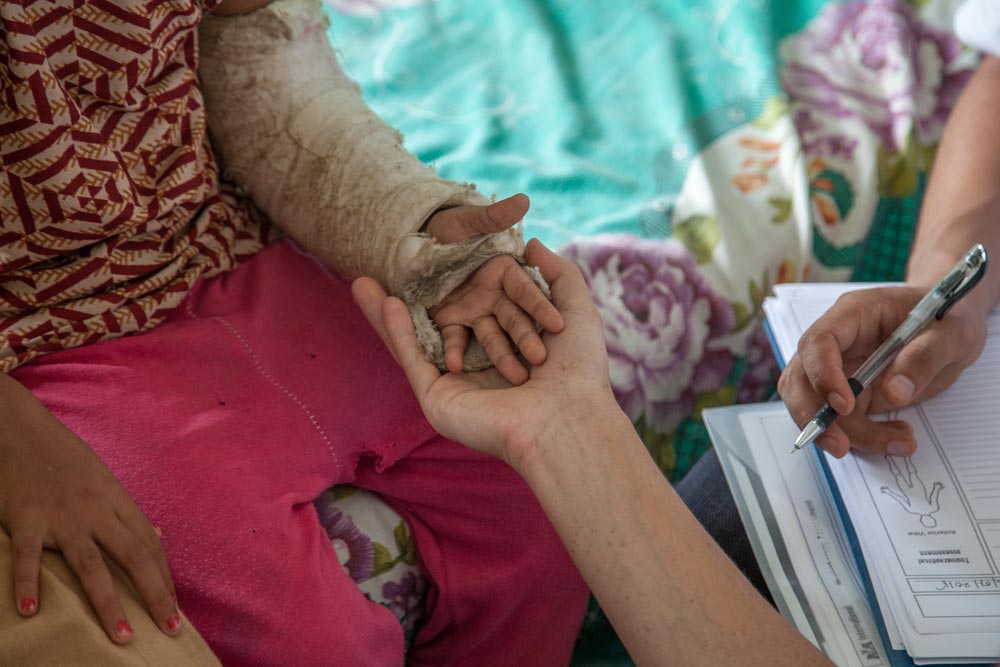 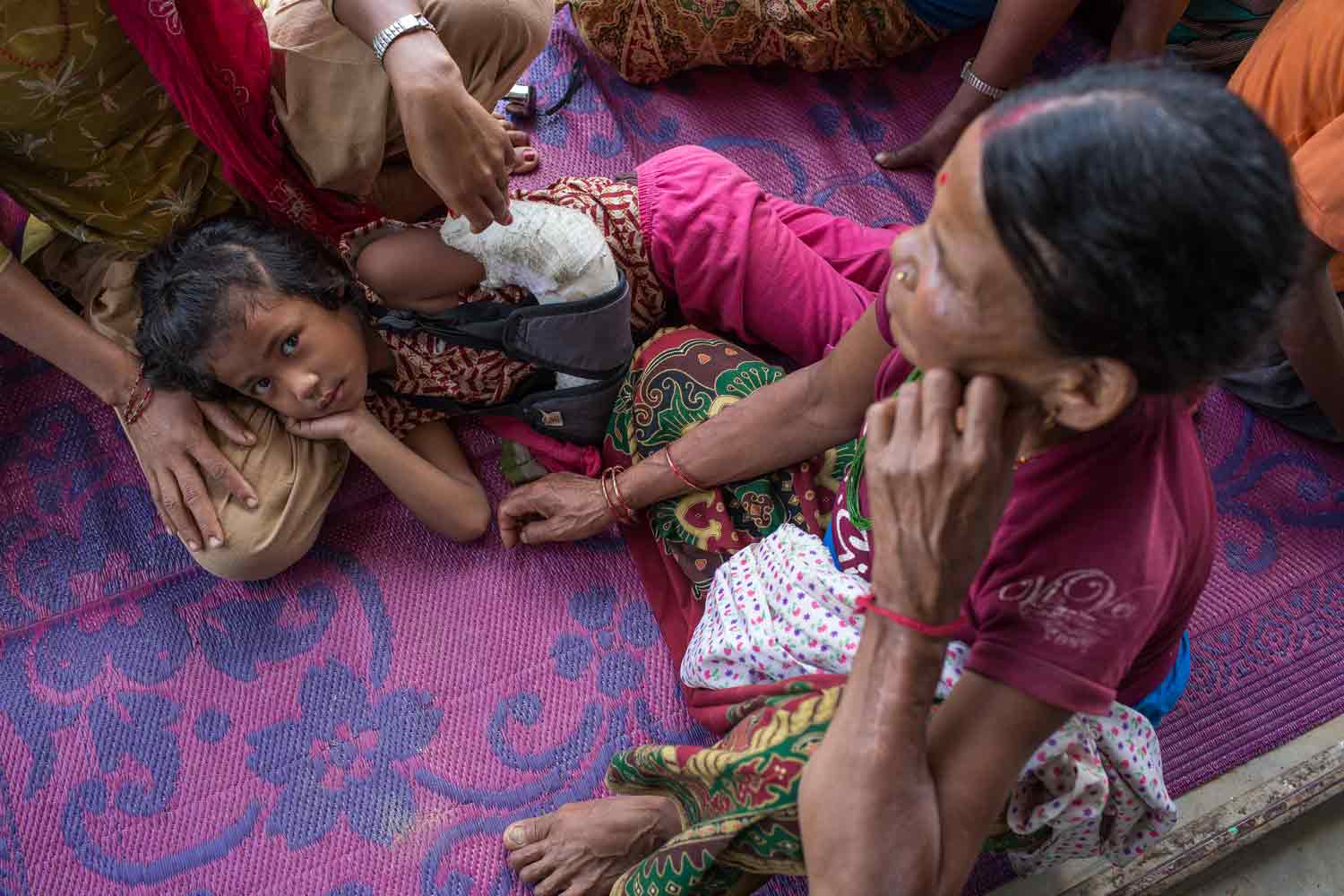 Luckily, International Medical Corps, in partnership with doctors from a reputed government hospital in Kathmandu, would be running a temporary orthopedic clinic in Gorkha the coming weeks to help treat patients with complex injuries and follow up on some complex cases in the area. The ability to take Rajkumari to Gorkha for a follow-up visit with orthopedic specialists was welcome news to Kalpana, as was hearing about International Medical Corp’s newly opened Physiotherapy Unit at Gorkha hospital.

Though it was a long and exhausting day, our team was able to help people who might otherwise never receive treatment, which makes it all worthwhile, especially for Priyanka. 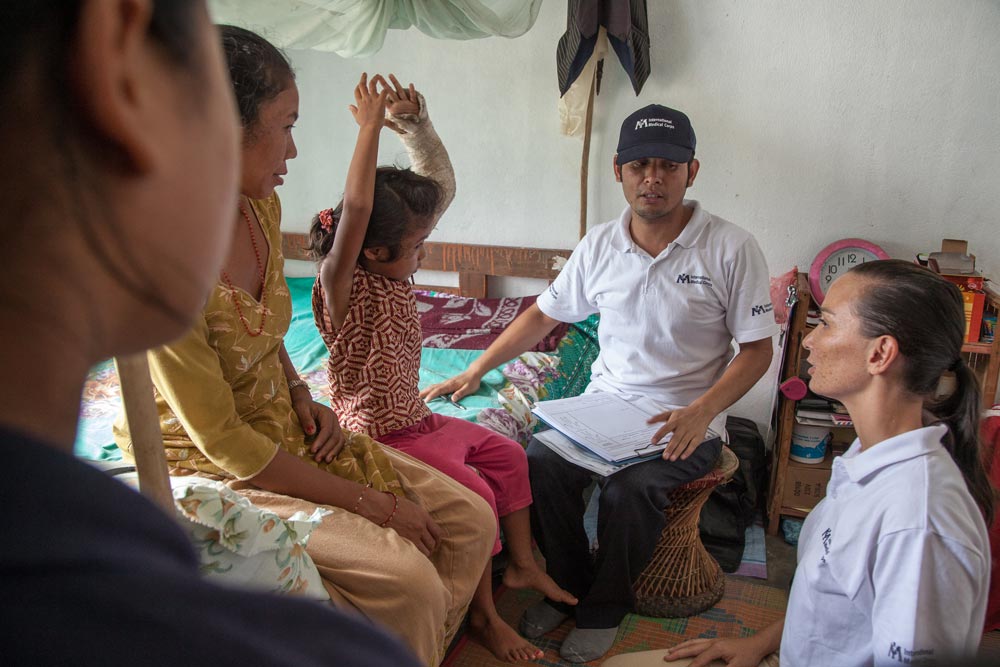 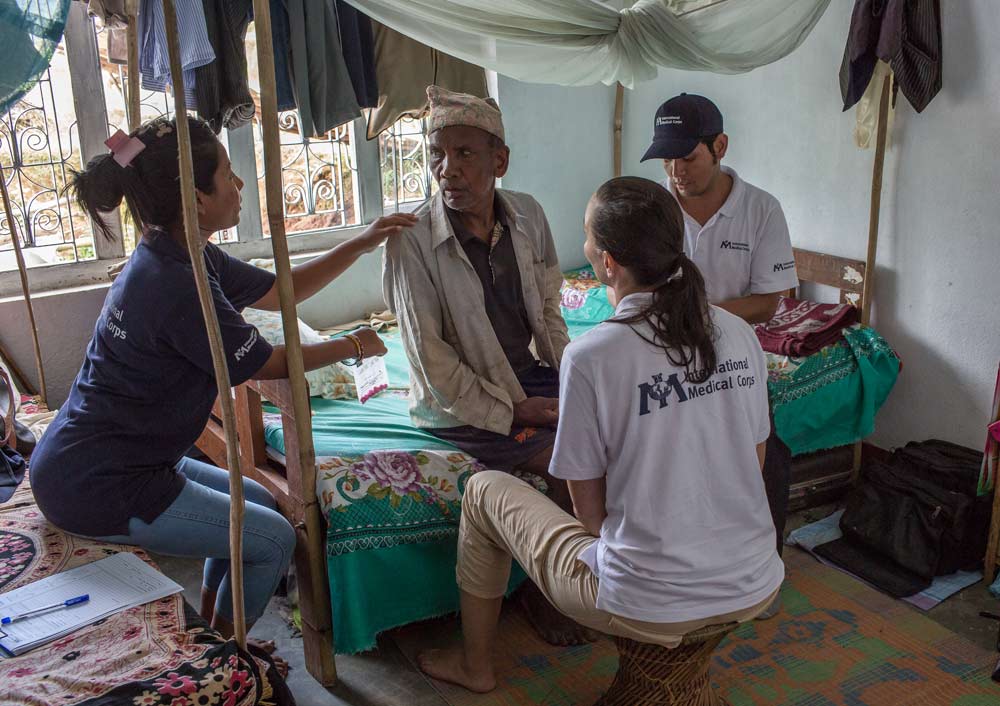 Working with International Medical Corps, Priyanka is helping those in need in her home district of Gorkha every day. She is no longer looking for ways to serve her country and fulfil her duty as a nurse; she is doing it.