The clinic stayed open through two long years of Islamic State rule, only to get hit by a car bomb as Iraqi Security Forces fought for control of the city. The earth outside the clinic gate is still cratered from the blast, the metal window bars twisted and the glass behind shattered. A crack splits the concrete along the corridor where patients shuffle in and out of consultation rooms.

Tucked between houses on a nondescript residential street, the clinic in the Qahira neighborhood of northeastern Mosul, is one of eight health facilities that International Medical Corps, with funding from the European Union’s humanitarian budget, is helping get back to work after more than two years of neglect and destruction under the rule of Islamic State, also known as ISIL—the Islamic State of Iraq and the Levant—and daesh in Arabic.

At Qahira, the clinic ran on expired medications. “[We used] whatever daesh could bring,” said Mohammad Quahaiba, who helps manage the facility. “Many with chronic diseases went without treatment for a long time. We had to tell patients there were no drugs and [the expired medicines] were their only choice.”

The wounds to the city’s health care system are extensive: small arms fire has pockmarked the walls, mortar shells have crashed through roofs, electricity and water supplies have been cut, and the availability of medicines has been intermittent at best. Most clinics were forced to shutter their doors altogether and did not reopen until the eastern Mosul fell to Iraqi Security Forces in January after months of fierce fighting.

Dr. Reem Mohamad remembers returning to her clinic in the eastern Mosul neighborhood of Arkan about the same time to find it completely looted. “It was empty,” she said. “There was nothing here—not even furniture.”

The toll absorbed by Mosul’s shattered health care system has meant that many residents went without medical services for months—some possibly for years. While creating points near the frontlines to tend the wounds of war is critical, so too is restoring Mosul’s primary health care system once areas become accessible so that people can once again get treatment for common ailments and long-neglected chronic conditions.

For the past few months, International Medical Corps has been working to restore the eight clinics to a point where they can once again care for patients. This includes restocking medicines, finding generator fuel, and repairing the buildings themselves, fixing the craters and cracks that came in the fury of battle. For those clinics that did not have at least one male and one female doctor—like the clinic in the eastern suburb of Gogjali—International Medical Corps also hired and transported staff.

For Muntaha Younis, a mother of 10 who lives in Gogjali, the reopening of her neighborhood clinic marks the first time she and her children have seen a doctor since June 2014, when ISIL first took control of Mosul. “This primary health clinic is very useful,” she said. “It’s really good for us. In the time of daesh, there was no clinic and no medicines.” 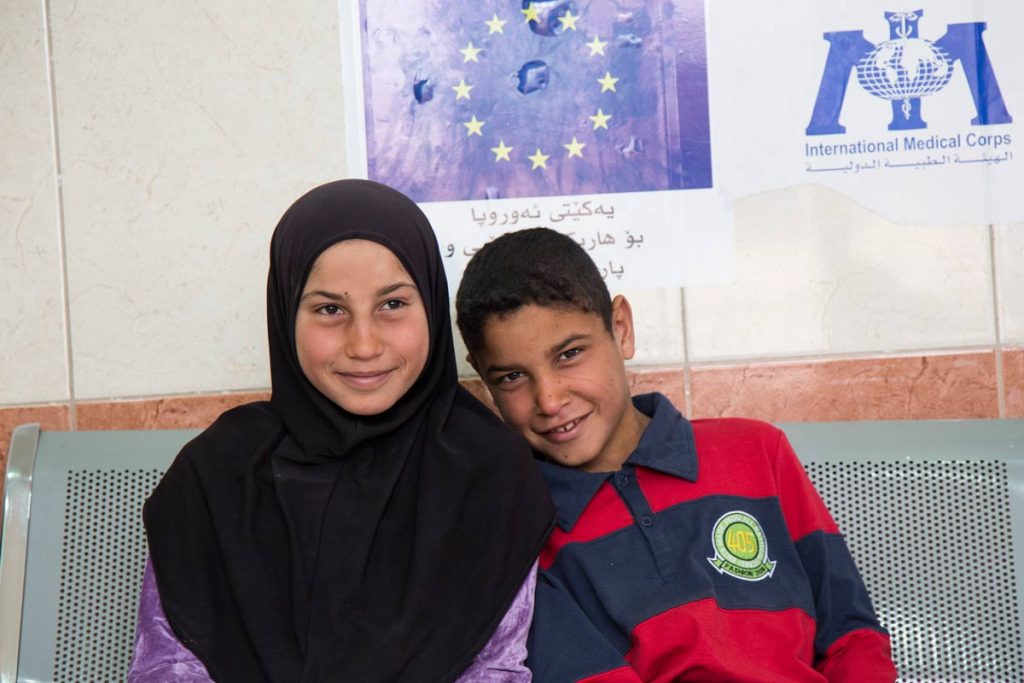 “There was a big difference after International Medical Corps came,” said Nithaq, who works at the clinic in the Mosul’s Nour neighborhood. “Now we have more drugs and our patient visits have increased.”

With the battle for Mosul grinding in the city’s western neighborhoods just across the Tigris River, the clinics are also making care available to those who were driven from their homes in still-contested areas and may not yet have received the medical services they needed along the way. Wissam Thanoon and his family were trapped inside west Mosul for weeks when three mortar rounds exploded just behind their house. His three children, ages 11, nine, and six, were all outside when they hit.

All survived, but were injured.

His sons suffered fractures to their feet, while his daughter had cuts on her legs. Their only option for care was a neighbor who worked as a nurse. “We had no other choice but to get first aid from the nurse,” said Thanoon. “We ran to her while bombs and shells were falling. She dressed the injuries as best she could.”

As fighting closed in around them, the family had no choice but to wait, hiding in their home with four other families, eating only one meal a day of rice. Six days passed before they could flee, working their way south and then eventually to Qahira to stay with extended family. When they arrived, Thanoon took his sons to the clinic nearby to have their injuries dressed. It is the first time the family has had a regular clinic to visit near their home since ISIL seized control of the city more than two years ago.

Meanwhile, work is now underway to repair the damage caused by the car bomb. The shattered windows are being replaced, the cracks in the concrete filled. “The situation is different in every way,” said Quahaiba. “Patients had to pay for everything under daesh. Now…[care] is free of charge —and we are receiving medicines.”

He estimates the Qahira clinic sees about 300 patients a day—a sign that this corner of Mosul is slowly coming back to life. But just a few miles west, Iraqi Security Forces clash with ISIL in the most densely populated parts of the city, sending families like Thanoon’s fleeing for safety. Others remain trapped with no access to health care at all. As more neighborhoods of the city become reachable, more clinics like the one in Qahira will also need support to become operational again. Only then can Mosul’s war weary citizens finally get the care they need and deserve after living nearly three years under ISIL, including months of brutal conflict.