Imagine being discharged from a hospital after four months of recovery. Now, picture having to scale the precipitous mid-hills of Nepal—real mountains—for seven days before you can get home. As bizarre as it may sound, this was the predicament one Nepali man found himself in as he prepared to leave Gorkha Hospital and International Medical Corps’ Physiotherapy Unit, where he had spent the last few months recovering from multiple orthopedic fractures.

Dhan Singh Gurung is a resident of Gumda, a village literally bordering the epicenter of the disastrous earthquake of April 25, 2015. At the time of the dreadful event, he was out herding cattle with his friends. Suddenly, powerful tremors dislodged masses of earth from the hills above. “Before I could run, an avalanche swept me off my feet and tossed me into a nook on the side of a cliff. Squinting through dust, I witnessed the landslide running its course above me. I had been spared.”

Unfortunately, his injuries wouldn’t allow him to crawl let alone walk. Presumed dead by his family and loved ones, he remained trapped without food or water for seventy-two hours. Finally, after what must have felt like eternity, he was found and flown to Gorkha Hospital in a helicopter. This is where International Medical Corps’ physiotherapy team first met him. 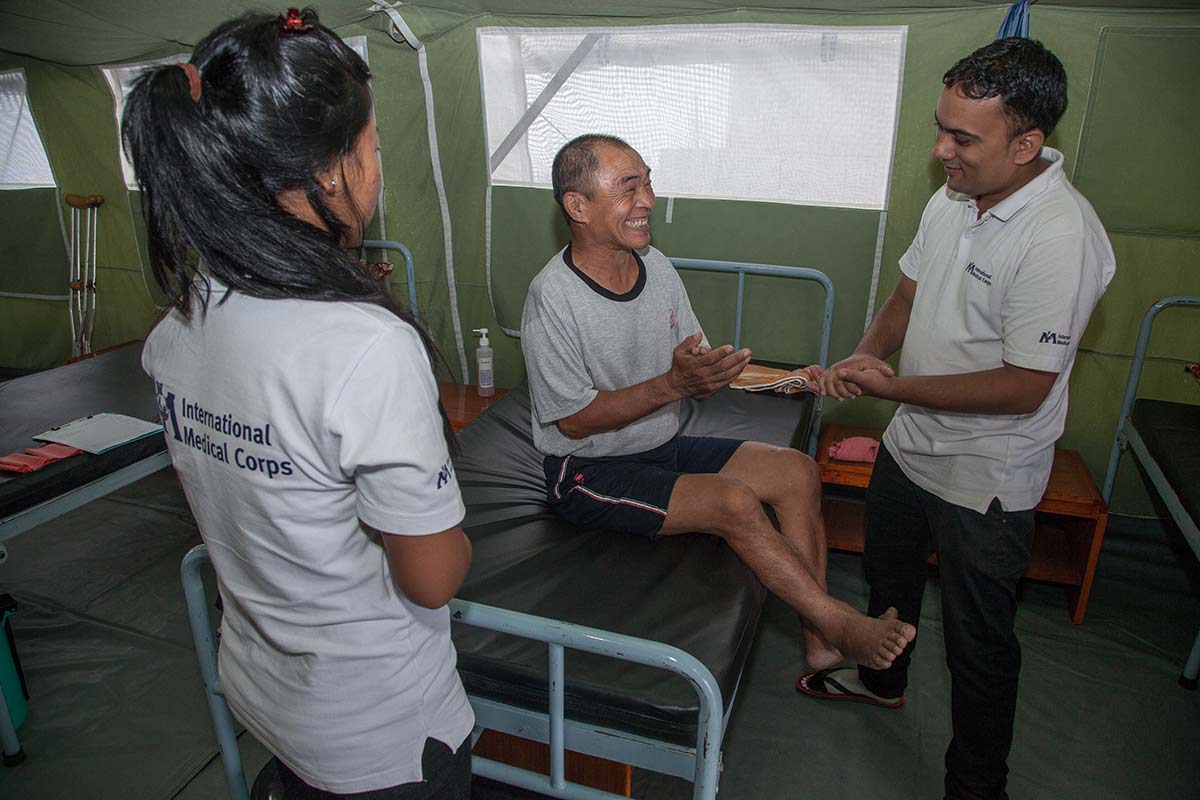 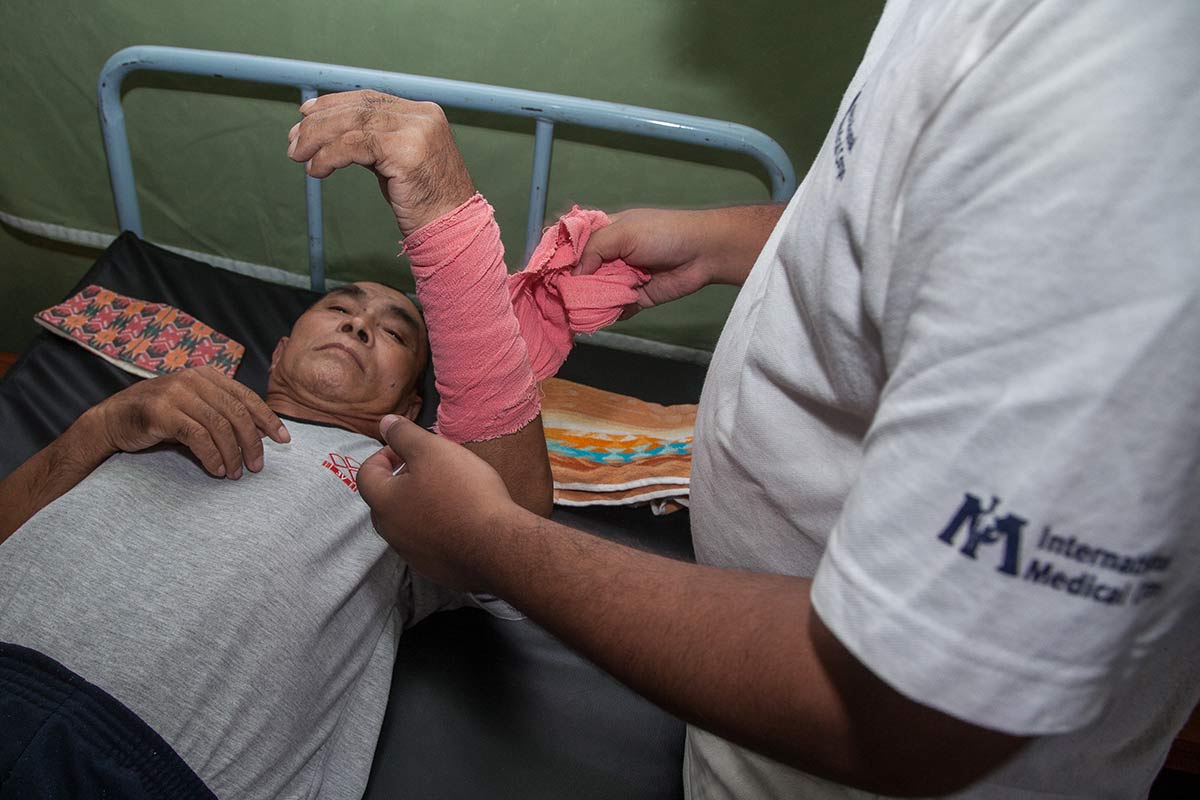 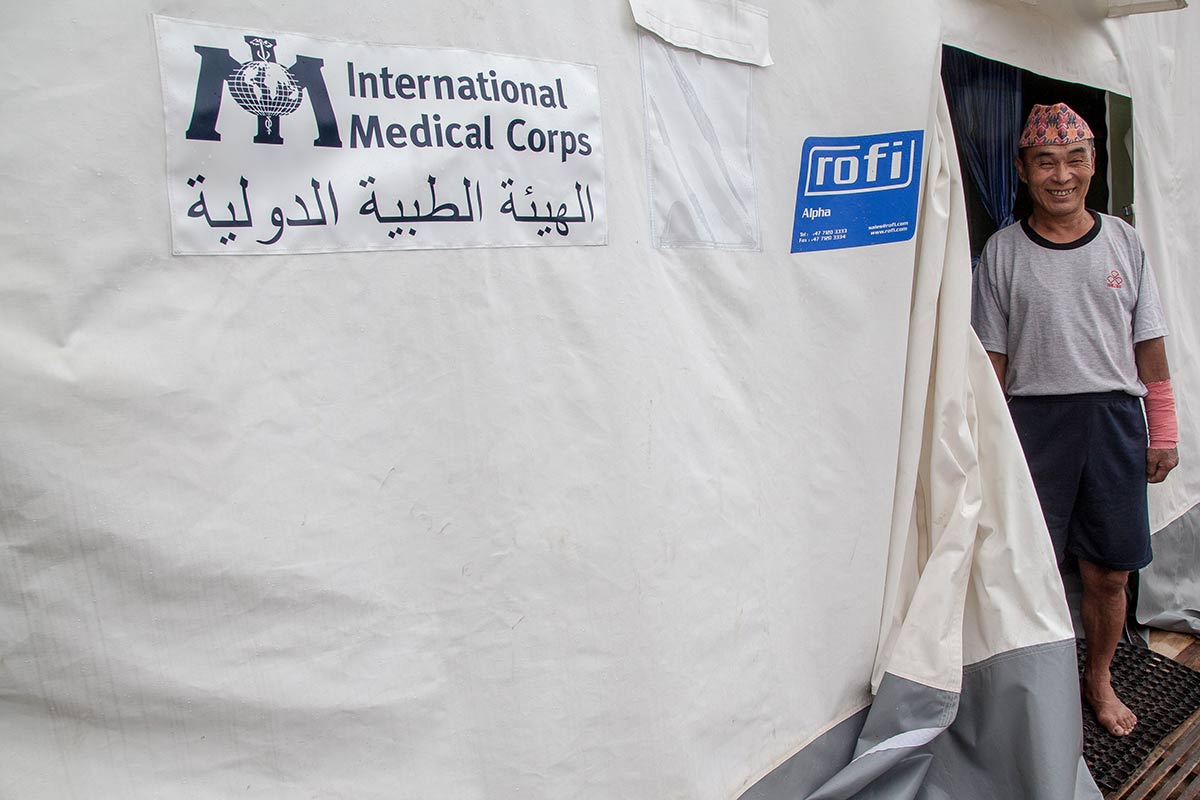 For a 57-year-old man, Gurung looks remarkably in shape. His physique, especially the build of his lower body, gives him an athletic aura, like he could have been a soccer player back in his day—a short but speedy midfielder perhaps. In reality, these features are simply an indication of the strenuous nature of peasant life in the countryside. Whenalone, Gurung wears a detached, stoic veneer on his face that quickly dissipates at the sight of an acquaintance. Beaming with joy, he envelops you in warmth. It is only then, when his cheeks and brow furrow, that you appreciate his age.

“I am lucky to be alive. The nine villagers that were out herding their cattle with me are still missing. But life is less than ideal. I have been at the hospital for months. Meanwhile, in Gumda, my house is destroyed and almost all my cattle perished during the landslide. If it weren’t for the doctors that have advised me to stay, I would be on my way back.”

It didn’t take much effort to empathize with Gurung’s sense of urgency, but it was also evident that his doctors had his best interest in mind. Still recovering from multiple fractures on his right leg, he was not ready, by any stretch of the imagination, to walk those mountainous trails for a week. Even at his pre-earthquake fitness level, he would have taken three days to get home.

In the end, despite the heartbreaking story of an earthquake survivor waiting to go back to his community, I was able to find a ray of hope in all this. Briefing me on Gurung’s recovery, International Medical Corps physiotherapist Ashok Upadhaya assured me that it wouldn’t be long before his patient would be fit enough to leave. Having personally administered countless physiotherapy sessions on Gurung, he is witness to the remarkable changes in the man’s limbs. “Between all those hours spent on gait training, hand function exercises, and a surgery conducted at an orthopedic camp that we organized, we have done all the we can to ensure that he can resume his normal life.”

When I asked Gurung how he felt about the help that he was getting, he noted that physiotherapy had made his life easier. He wished for the donors to continue their support and scale their efforts to help others in Gorkha. On this note, I said goodbye to him.

Then, one afternoon, almost a month later, I was pleasantly surprised to find out that Dhan Singh Gurung had been discharged. When I heard the news, I rang Ashok Upadhaya who told me that his patient had been deemed fit enough to be released by the doctors at the hospital. To help Gurung along, International Medical Corps arranged a car to take him to his relative’s house, from which he can start his arduous journey home whenever he wishes. From what I can gather about his recovery, Dhan Singh Gurung might not take a week to make that journey after all.