When the call came through that a 39-year-old woman was allegedly sick with Ebola-like symptoms, Dr. Diomande Zingbe Ahmed and his colleagues were sent to investigate. Equipped with personal protective equipment (PPE) and chlorinated water, the team set out to the Fula Madina neighborhood of Conakry, Guinea’s seaside capital, in a pick-up truck, their ambulance following closely behind. They found their destination on a dusty side street—the ground-floor apartment of a three-story, red-tile-roof building known as the Yattaya Center.

Inside, a woman laid in bed with a fever, suffering from abdominal pain, diarrhea, and vomiting—all possible signs of Ebola. Dr. Ahmed and the team tried to convince the family to let them take her to the nearest Ebola Treatment Unit (ETU) to be tested, but they refused, leaving them with no choice but to turn around and leave the patient in her family’s care—and potentially spread Ebola.

Guinea was the source of the largest and deadliest Ebola outbreak in history that led to approximately 11,300 deaths. As the virus cut its deadly path through families, communities and a worried nation, it was aided by unwilling accomplices—rumors, suspicion and misinformation. And as the virus itself recedes, these allies remain as strong as ever. How to deal with them presents an unusual challenge for authorities as they work to strengthen their defenses against a potential future outbreak. 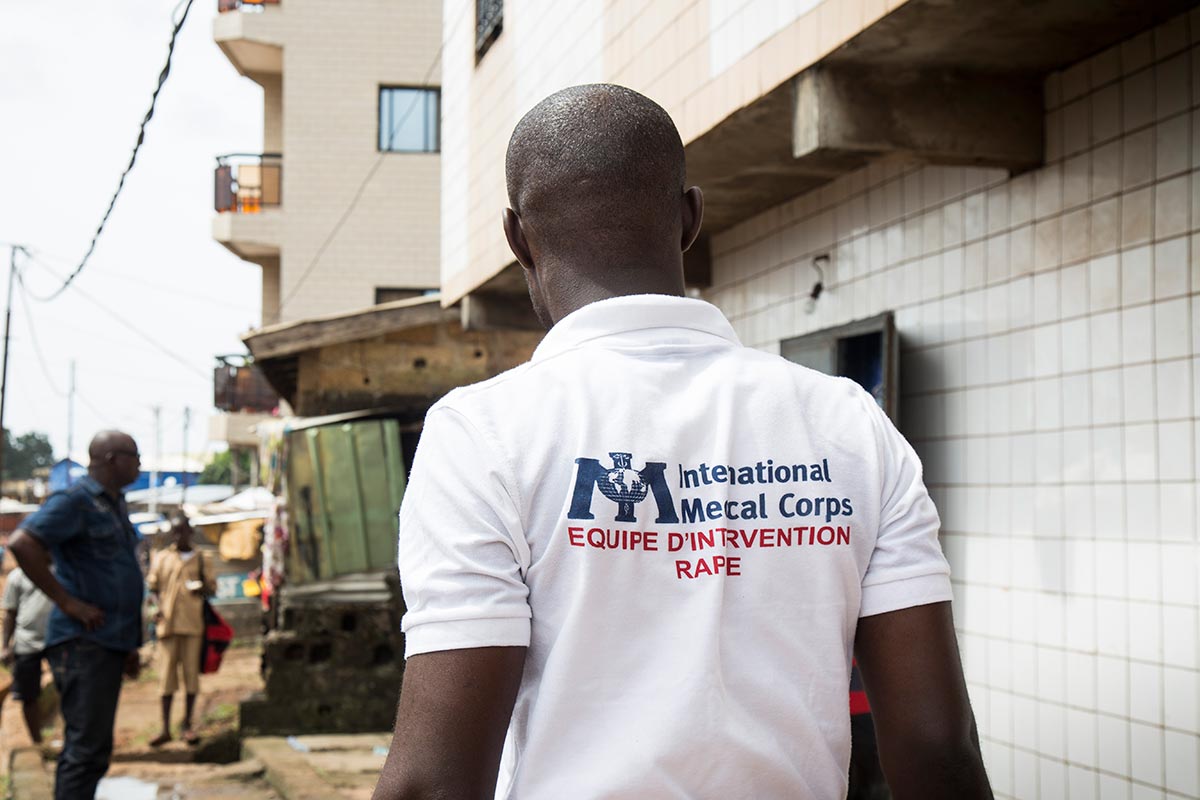 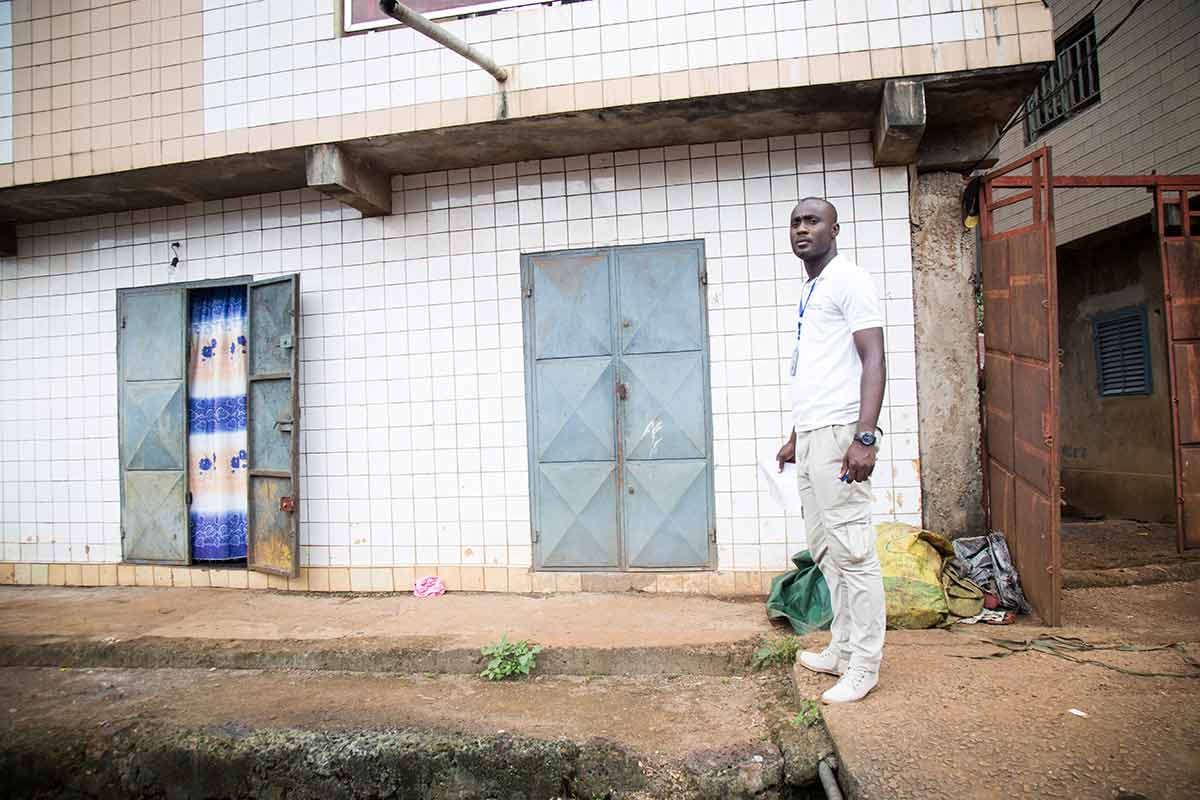 I visited the West African country and found that, despite the death and devastation, suspicion of ETUs and misinformation about Ebola persists, helping the virus stubbornly persevere.

“The hardest problem we face is the resistance in the community,” said Dr. Ahmed, a doctor on International Medical Corps’ Rapid Response Team, a group tasked with following up on reports of suspected Ebola cases and deaths. “Up until now, people concluded that white people brought Ebola here. Some say it doesn’t exist at all. It is this misinformation that has allowed the virus to hold on.”

The rumors I heard in Guinea about Ebola range from complex conspiracies to scenes out of a horror movie. Some say Ebola is not real and is an elaborate lie created by politicians and foreigners for money and power. Others believe medicine, food, and even thermometers at ETUs are laced with a lethal poison and that the doctors and nurses sell the blood and body parts of the deceased.

International Medical Corps, which works with the national coordination system in Guinea for Ebola, launched a community engagement program to challenge the beliefs head-on. At first, the team went door-to-door in affected communities to start conversations around Ebola. The shirts that they wear into communities read, “Parlons de notre santé” or “Let’s talk about our health” because initially, some communities even refused to hear the world “Ebola.”

They then recruited community leaders, traditional healers, teachers, and other respected community figures to join them in discrediting the rampant rumor-mill. “At first, people were not accepting,” said Ballakissa Kouyate, the president of the women’s association in Dubréka, a town west of Conakry that was badly hit by Ebola. “Before it was not easy. We were fighting people here whenever we said ‘Ebola is real.’”

The outreach seems to be working. Those I spoke to said that finally, nearly two years after the first case was reported in Guinea, people are listening. Dr. Toure Oumou, who leads International Medical Corps’ community engagement efforts, feels that she witnessed a shift take place about five months ago where more and more people were convinced that Ebola was real and they could take steps to prevent it.

According to Mihawa Keita, a traditional healer in Dubréka, the first cases of Ebola caused a lot of confusion. Initially, she thought it was malaria or yellow fever. “Ebola was very difficult to declare,” she said. “In the beginning, no one knew it was. It had never happened here. The group helped me so much in explaining what I never knew.”

But a survey that International Medical Corps conducted in July and August of this year shows how long it can take to truly change deep-rooted beliefs and behaviors. Of the 190 people interviewed in five areas of Guinea, approximately 18 percent of them still did not believe Ebola was real.

After their first failed attempt to encourage the sick woman in Fula Madina to be tested for Ebola, Dr. Ahmed and the Rapid Response Team returned the following day to try again. To not draw attention to themselves, some of the team wore plain clothes and the ambulance waited a few miles down the road. They contacted the chief of Fula Madina and other neighborhood leaders to help them persuade her only to emerge with an agreement that she would travel with the chief by taxi to a clinic—not with the International Medical Corps team, or in the ambulance, or to the ETU.

Still sick in bed with symptoms similar to that of Ebola, the plan could put the taxi driver and chief at-risk and could not guarantee that she would be safely isolated and tested as she would be in the ETU. “We are worried she could hide or leave if we push too hard,” Dr. Mathieu, another member of the International Medical Corps Rapid Response Team, explained to me. “It is a delicate balance of staying on top of a case and not berating them to the point that they become elusive.”

Eventually, with the help of the family’s landlord, the team convinced her to let them take her to the nearest ETU in the ambulance for a test. As soon as the ambulance pulled up in front of the apartment, a crowd began to form in a crescent shape around the residence. The Rapid Response Team eyed the crowd as they put on their PPE and guided the patient to the ambulance, nervous that the swelling number of people could turn into a threatening situation as they had seen in many towns and neighborhoods across Guinea throughout the outbreak.

As we pulled out in our pick-up truck behind the ambulance, Dr. Mathieu says: “The situation put us all under a lot of pressure. We were not secure. You now see how hard this work can be?”

The following day, we received confirmation that the woman tested negative for Ebola. The country discharged its last Ebola patient on November 14th. If no Ebola cases emerge for 42 days, Guinea can finally be declared Ebola-free.