“My childhood wasn’t easy,” says Annick Carole Tchouli Tenkeu, International Medical Corps’ Child Protection Manager in Cameroon’s Far North region, of growing up in a polygamous family in Yaoundé. Her mother, one of three wives in the house and a mother to six, was 25 years younger than her father and the target of much jealousy and bullying—a tumultuous dynamic that filtered down to Annick and her siblings. Today, Annick fights to give children the protection she never received.

Growing up, Annick dreamed of being a lawyer, but she and her siblings were repeatedly told by their elders that they “would never succeed in life.” She became determined to prove them wrong. “I told myself, ‘I will succeed, to make people understand that only God holds our destiny’,” she explains. Despite the low expectations placed upon her, Annick excelled at her studies and received her Bachelor’s and Masters’ degrees in private law at the University of Yaoundé II-Soa. However, her father’s unexpected death plunged the family into crisis, and the only job that Annick could then find was with an insurance company, where she worked her way up to Head of Sales.

But having “always felt comfortable in bringing relief and giving help to people,” she became increasingly troubled over time with the way her company treated clients after they went through a disaster—namely, making promises that it would not fulfill. After five years with the company—and 15 years after entering into her original law studies—she decided to go back to school, pursuing a Master’s Degree in political science and graduating at the top of her class. Soon thereafter, in 2015, she founded a local humanitarian organization—the Association for the Assistance and the Reintegration of War Victims—and started traveling throughout Cameroon to advocate for refugee children. In February 2018, she joined International Medical Corps as a child-protection social worker in Minawao camp.

The camp is home to nearly 70,000 Nigerian refugees who have fled violence in the Lake Chad Basin region, caused mostly by insurgent attacks following Boko Haram’s leadership split in 2016. Refugees here depend almost entirely on humanitarian assistance from ten NGOs working in the camp. Though a number of essential services are provided, significant gaps remain in health, education, protection, food security, livelihood, access to energy, and water, hygiene and sanitation. The camp lacks adequate vegetation and the climate is extreme, with intense heat and winds.

Within the camp, children face myriad challenges. Many do not attend school or understand the importance of education, being raised by parents who themselves did not go to school. Children get exploited while working in the markets and on farms, where they are sent by parents to compensate for low food rations. Begging is common among children in the camp.

Every day, my goal is to give opportunities to each child to get access to basic social services—such as a birth certificate, education and health—and fulfill his or her rights for blossoming and a better future.

In response to the violence, exploitation, abuse and neglect that children face, International Medical Corps helps lead child protection activities in the camp, with Annick now serving as Child Protection Manager. These activities entail social work case management, awareness-raising efforts and events for community members on child protection topics, and training for governmental and NGO workers on children’s rights, incident reporting, case referrals, family separation and basic psychosocial support for children in emergencies. Our teams also provide psychosocial support and life-skills training to children, and run a Youth Empowerment Center that serves adolescents and young adults (aged 17 to 21) who are at risk of gender-based violence, have disabilities or have dropped out of school.

“The Youth Empowerment Center—which has trained 160 young people to date in skills such as sewing, knitting, embroidering, gas welding, carpentry and mechanics—is really appreciated by the community and our partners,” says Annick. “Because they are idler, these adolescents are often at risk of drug consumption and early pregnancy for girls, so offering this opportunity to them is a great relief for many families.”

Our child protection team also helps to reunify families and places at-risk children within Minawao camp in foster families there. This program includes training foster families—who are selected based on criteria such as availability, commitment to the well-being of children and sufficient spaces in their houses to accommodate children—on parental skill and psychosocial first aid. The team also follows up with children who are placed in foster homes, to ensure that they are being treated well. 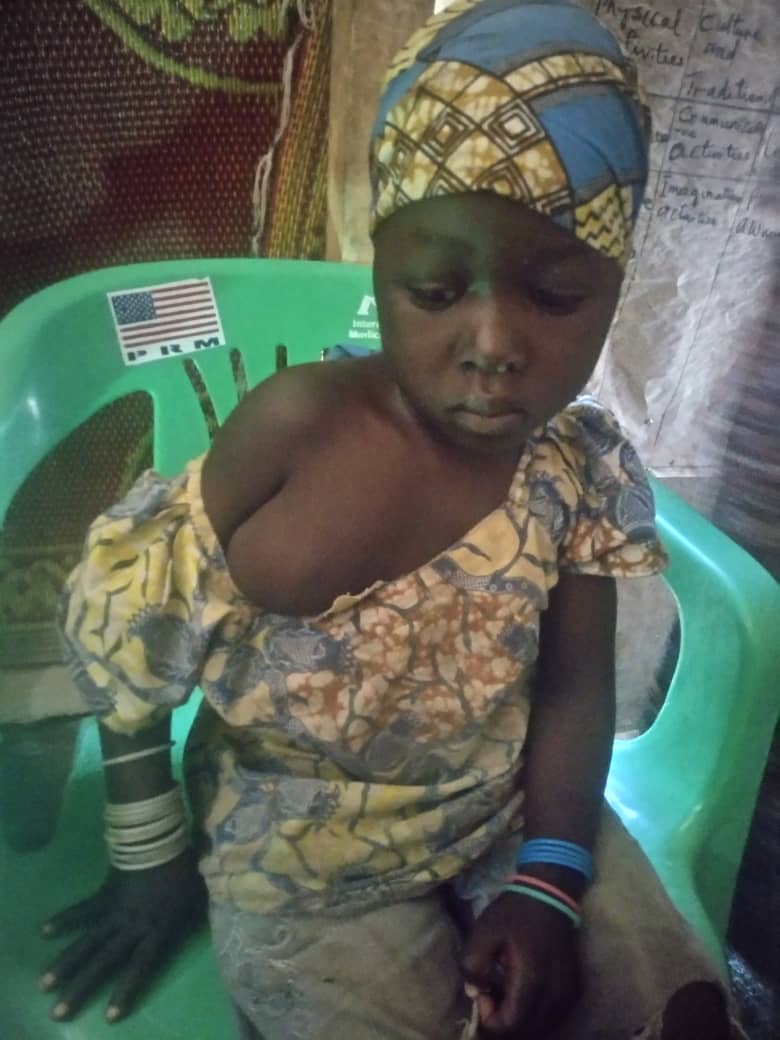 Four-year-old Falmata with her tumor before her surgery. 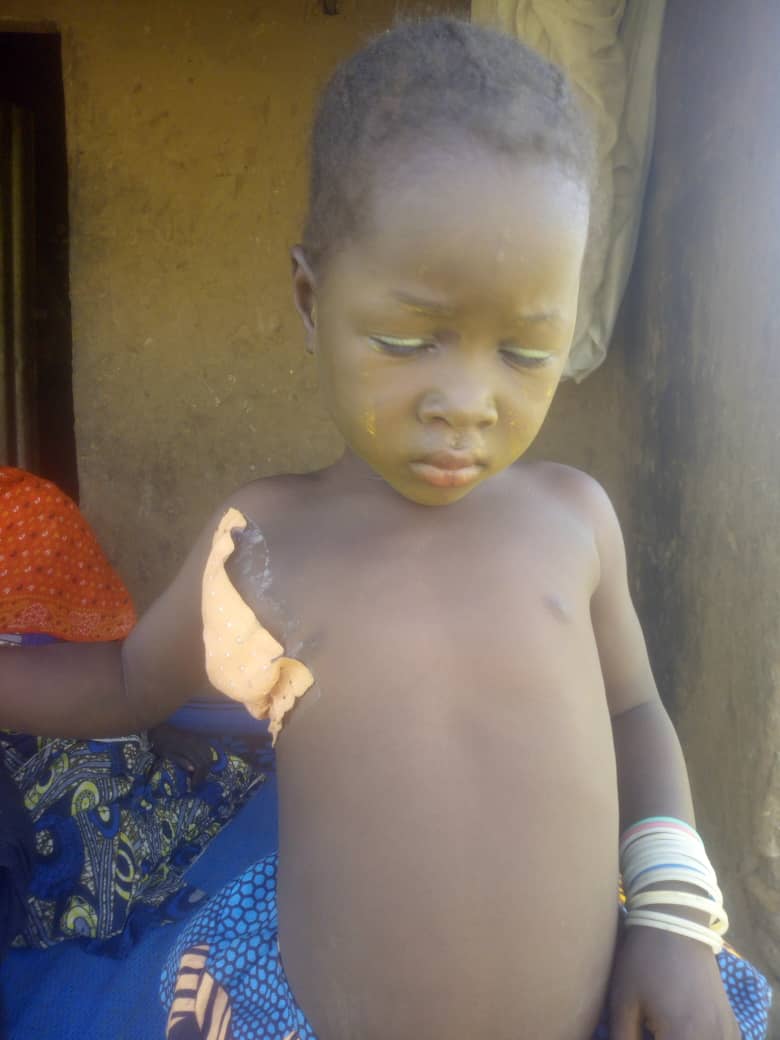 Falmata during her treatment, after surgery.

She recalls one girl, Falmata, who stood out to her in particular. At four years old, Falmata had been suffering from a large tumor for a couple of years when a staff member working at one of International Medical Corps’ child-friendly spaces discovered it. Falmata, whose parents believed her tumor was the result of a “mystical fate” to which they had decided to leave her, had been living in pain and using a scarf to hide her tumor. The staff member referred Falmata to a social worker, who visited Falmata’s parents to encourage them to seek medical attention for the tumor. They consented to having Falmata examined at International Medical Corps’ medical unit in Minawao camp, and subsequently sent her to Mokolo Annex Regional Hospital for surgery, where she spent 19 days recovering before returning to the camp.

Under the supervision of International Medical Corps’ social worker, Falmata continued to receive follow-up treatments from International Medical Corps’ medical team for a month and a half. Today, she enjoys perfect health, attends school and participates in all of the activities at our child-friendly spaces. It is for children like Falmata that Annick does her work, despite all the challenges and frustrations of working in such an extreme and underserved environment.

She most of all wants to “put a smile on each child’s face” because she believes that “children are innocent and don’t deserve to suffer.” Annick will soon begin pursuing her PhD in International Studies, but she will continue to fight for the most vulnerable children in Cameroon, fervently advocating for them until they can advocate for themselves.

International Medical Corps began working in Cameroon in 2008, in response to an influx of refugees from the Central African Republic (CAR), along Cameroon’s eastern border. In the years since, we have provided lifesaving assistance in the midst of cholera outbreaks and floods, as well as care for families fleeing ongoing violence in the CAR and the Lake Chad Basin. Learn more about our work in Cameroon.