Amelia Augustino awoke to the crackle of gunfire. It was just after 10 pm. The fighting quickly intensified, engulfing the camp on the United Nations base in Malakal, South Sudan, where Amelia, her husband, and four children had sought refuge for two and a half years. About to give birth to their fifth child, Amelia gathered her children and followed the panicked crowds of people rushing to escape the battle. 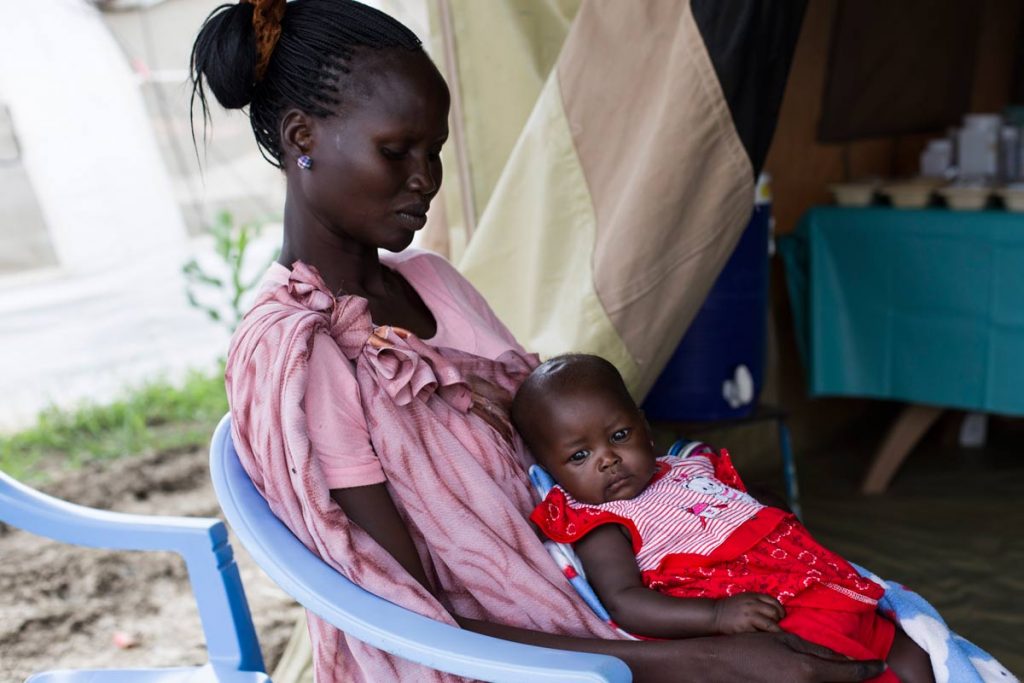 During the battle that raged over two days in mid-February, at least 18 died and precious assets, including health clinics and a rare surgical operating theatre staffed by International Medical Corps, were damaged or destroyed. It was amid the chaos of this carnage and destruction that an Ethiopian OB/GYN named Tekeselassie Gebreyohannes—known simply as Dr. Tek—found himself doing something that can only be described as surreal, something that he is still trying to make sense of: bringing new life into the world during the very moment he was surrounded by death.

They spent the night outside the base and the next morning, Amelia returned to the camp with her children and started to feel labor pains. “I just kept thinking about having a normal delivery,” Amelia said. “My real worry was that people would continue fighting.”

She went to a makeshift hospital that International Medical Corps had managed to set up as the fighting raged on around them. The medical team of eight had worked through the night, doing their best to treat the injured despite having lost all their medical supplies and their clinics to the violence.

“We could not access our clinic,” said Dr. Jean Paul Umurungi, International Medical Corps’ Medical Coordinator in Malakal. “We had to relocate to a safer place but when we found one, all that was there was a container. We did the only thing we could do: we improvised and put a delivery bed in the container.”

This is where Amelia delivered her daughter, Mujwok, whose name means a “Gift from God” in their local Shilluk language. It was a nod to how she was miraculously brought into the world safely, surrounded by death and destruction. 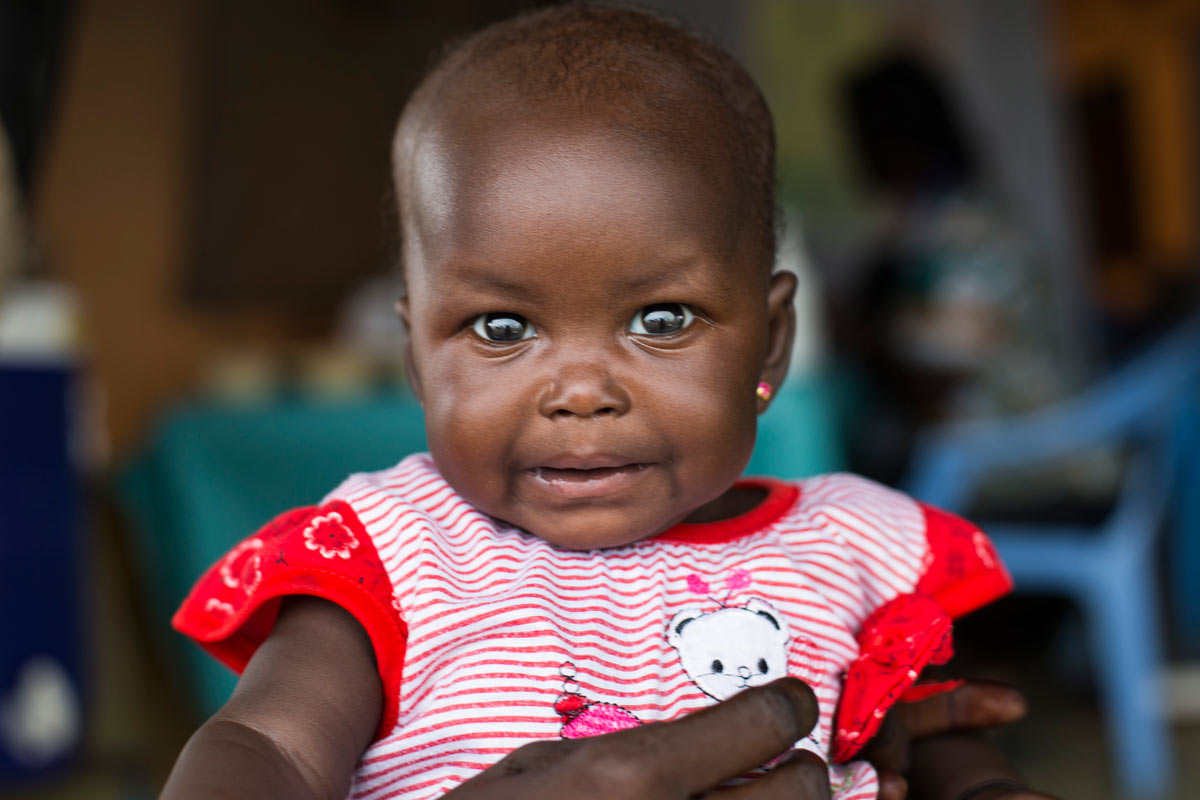 Mujwok was one of four babies that International Medical Corps delivered on the nights of Feb. 17th and 18th—the dates of the attack on the UN camp. Three of the children—including Mujwok—were born in the heat of battle. The fourth arrived just hours after the fighting stopped.

“We were so engulfed in the moment; we were just physically overwhelmed,” said International Medical Corps’ OB/GYN in Malakal at the time, Dr. Tekeselassie Gebreyohannes. “Now when I look back, it’s difficult…very hard to take in that people outside were dying and inside we were helping people give birth. Hard to comprehend.”

The February outbreak of violence inside the Protection of Civilians (PoC) site, the official name for displacement settlements established inside UN bases, was a low point in South Sudan’s devastating civil war. At least 25 persons—and possibly more than twice that many—were killed. Over 29,000 were displaced as more than one-third of the shelters were destroyed. The crisis subsequently sparked an investigation into the response of the United Nations Mission in South Sudan—known as UNMISS—whose mandate is to protect civilians.

More than 2.3 million people have been forced from their homes as a result of the civil war, now in its third year. Over 170,000 of the displaced live in PoC sites like the one in Malakal. While the warring parties signed a peace agreement, deadly clashes broke out once more in the capital, Juba, on July 7th, while sporadic violence has continued in many parts of the country.

Another challenge facing many South Sudanese is worsening levels of food security, as some areas have missed three planting seasons as a result of instability. The country’s currency continues to weaken, causing prices of food staples to rise. As a result, this summer is expected to be the worst lean season since South Sudan gained independence in 2011, with nearly five million people expected to face severe food insecurity this month (July).

For Amelia, who fled Malakal town with her family in August 2014, life in the PoC was difficult even before the fighting broke out and so many of the shelters were destroyed, but for now, it remains the only option for her family. “I don’t want to stay in the PoC,” she said. “I want to go home. But without peace, we cannot go back to Malakal town.”

Despite the challenges of life in the PoC, Mujwok, is now a healthy four-month-old baby, her brown eyes bright and her cheeks chubby. The International Medical Corps health facility, which was demolished during those two horrific days in February, has been rebuilt and is now restocked. Today, it once again offers a variety of services to the 33,000 people still living in the PoC in Malakal, including: primary health, maternal and child care, mental health support, and surgical procedures.

Amelia brings Mujwok regularly to the International Medical Corps clinic for immunizations and check-ups to make sure she gets a healthy start at life. When asked what her hope is for Mujwok and her siblings, Amelia replies: “I want them to grow up in peace.” 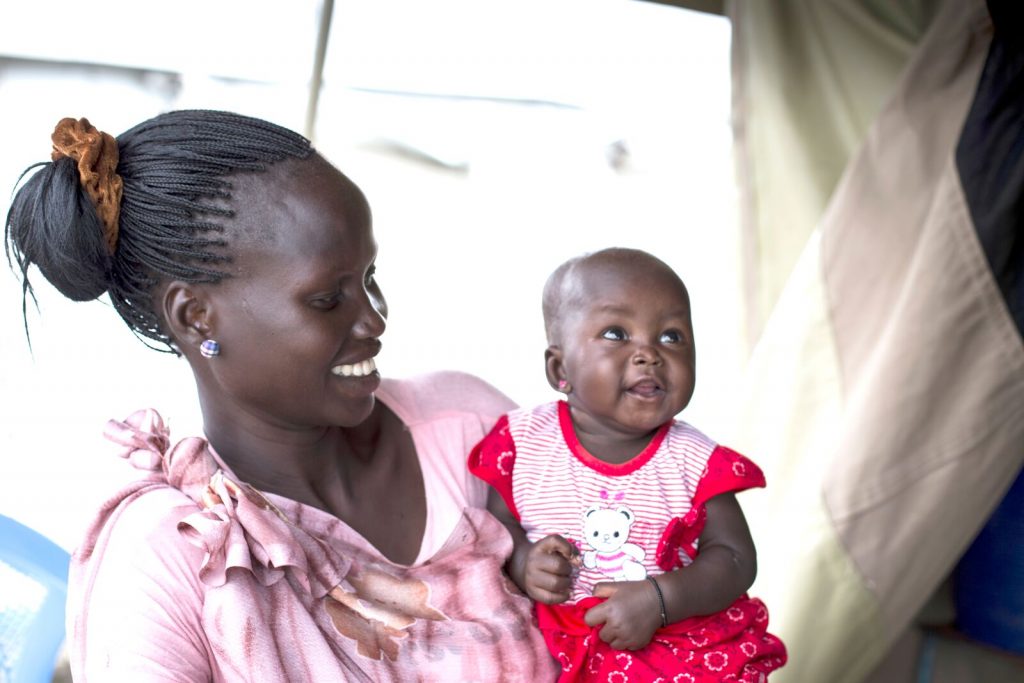