The call came in just after 5 pm: a 30-year-old man in Sélingué, a town in southern Mali not far from the Guinean border, was sick. His symptoms were frighteningly similar to Ebola—high fever and bloody vomit and diarrhea.

When he sought care at a local health facility, the clinic staff called International Medical Corps’ Rapid Response Team (RRT) in Sikasso, a town roughly a four-hour drive to the east, to investigate. International Medical Corps then worked with the National Center for Disease Control (CNAM), the arm of the Malian government tasked with Ebola response and preparedness, and the health facility in Sélingué to safely isolate the patient and send a blood sample for testing. If the results were positive, the RRT would transport him to the Ebola Treatment Unit (ETU) in the capital, Bamako, for round-the-clock treatment.

The next day, the test came back negative for Ebola virus.

While the patient did not have Ebola, the process that was set in motion in Sélingué signals that Mali’s health system is on guard and ready to respond to the virus if it resurfaces. The country became embroiled on the fringes of West Africa’s outbreak, the largest and deadliest in history, in October 2014 when a two-year-old traveled by bus from Guinea to Bamako. In total, eight people contracted Ebola in Mali, six of whom died. While the country was declared Ebola-free in January and the eight confirmed cases constitute a tiny fraction of the 28,000-plus probable, suspected, and confirmed cases reported during the outbreak, it is still at high-risk as small flare-ups of Ebola, like Liberia has seen, are expected for some time.

This makes well-coordinated response mechanisms not just a temporary measure, but an essential part of the wider health system. This is true not just of Ebola, but other infectious diseases with epidemic potential. “People know the symptoms and are on alert,” says Dr. Boubacar Niaré, International Medical Corps’ Rapid Response Team leader. “Now people know what Ebola is and that is a good result.” But that was not always the case. What happened in Sélingué was the result of months of work by International Medical Corps to train and equip health workers and other professionals to be ready for an infectious disease outbreak such as Ebola.

When Ebola was confirmed in West Africa, Dr. Kossoum Sanogo, the director of Gabriel Touré Hospital, and Dr. Timbo Samba Karim, the medical director, did what the hospital could afford and accommodate. Staff received basic information about Ebola and simple infection prevention control (IPC) measures like handwashing stations and temperature checks, were put in place. They sealed off some of the hospital’s entrances and made the surgeons’ staff room an impromptu isolation ward.

One of Dr. Sanogo’s greatest worries was that his staff, who lacked comprehensive training and saw the devastation Ebola caused in hospitals in Sierra Leone, Liberia, and Guinea, would run at the sight of a suspected case.

“We received patients and many of the doctors and nurses ran away because they were scared,” says Dr. Modibo Doumbia, an emergency room physician at Gabriel Touré. “The patients ended up not having Ebola, but we were really afraid because we didn’t know how to react.”

But not all cases were negative. Over the course of the outbreak, Gabriel Touré saw 16 suspected cases—one of which tested positive for Ebola. The Ebola patient was identified and isolated before entering the main hospital, narrowly avoiding what could have been an eruption of new cases.

Starting in May 2015, International Medical Corps began providing the hospital IPC materials and training its doctors, nurses, and other staff on IPC protocols, Ebola case management, use of personal protective equipment (PPE), and psychosocial services. The five-day course, which takes place at a training center International Medical Corps built on the grounds of CNAM, includes both classroom work and hands-on simulation exercises, giving participants the information and practical skills to identity and respond to Ebola safely and effectively.

“Without this training I would have been afraid if I received a patient,” says Dr. Doumbia, who attended the training course alongside 58 other professionals in November 2015. “Now I know what to do and how to stay safe….We are really ready to face it.”

In all, more than 2,200 people from private and public health care facilities from across Mali have attended the five-day training course. “The good thing about the training was that it called people from various hospitals,” says Dr. Sanogo. “I believe if workers are proud and trained, they can respond without fear.”

“In the beginning, we did not have enough resources to stop Ebola, but we used what we had to inform people about it,” Dr. Adama Baridian Diakite, the director of the Department for Health and Public Hygiene in Ségou, a region in central Mali.

Not unlike Gabriel Touré, health facilities in Ségou were dangerously exposed to Ebola, with staff often ignoring basic precautions like using gloves and little, if any, education about the virus. There was also not an established system to handle suspected Ebola cases, which prompted International Medical Corps to create RRTs in Ségou, Sikasso, and Bamako. Made up of six people each, the teams were trained and equipped to investigate suspected cases and, if needed, facilitate testing and transport the patient to the country’s ETU in Bamako.

“The biggest challenge was to organize all the activities so people could come together and share information,” Dr. Niaré says. “We created a rapid response team and took both public and private facilities into account so the whole health system can work together.”

The RRTs also provided an invaluable training resource to health facilities, offering on-the-job coaching on IPC practices and Ebola case definition. Dr. Abdrahamane Diarisso, International Medical Corps’ RRT physician in Ségou spent much of the last year traveling to health centers across the region to first let them know that they were ready to respond to any suspected case, but also work with staff to make sure they were ready and prepared. 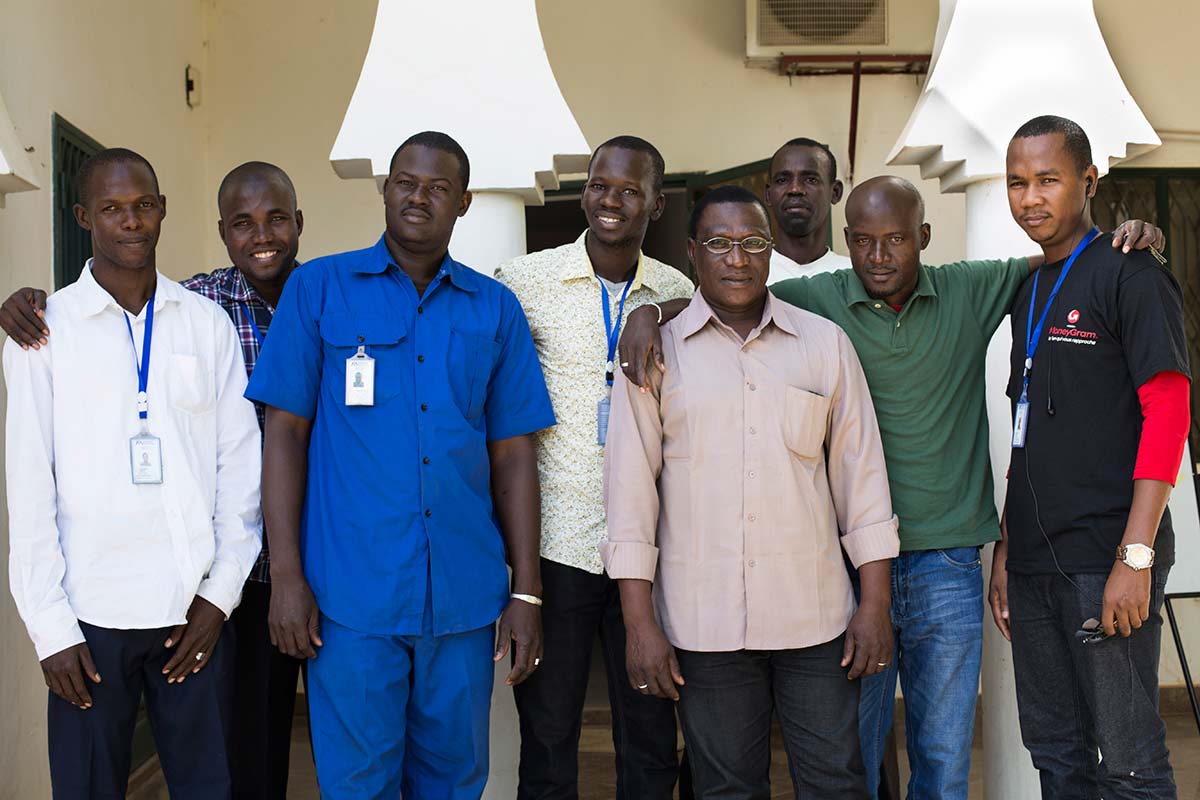 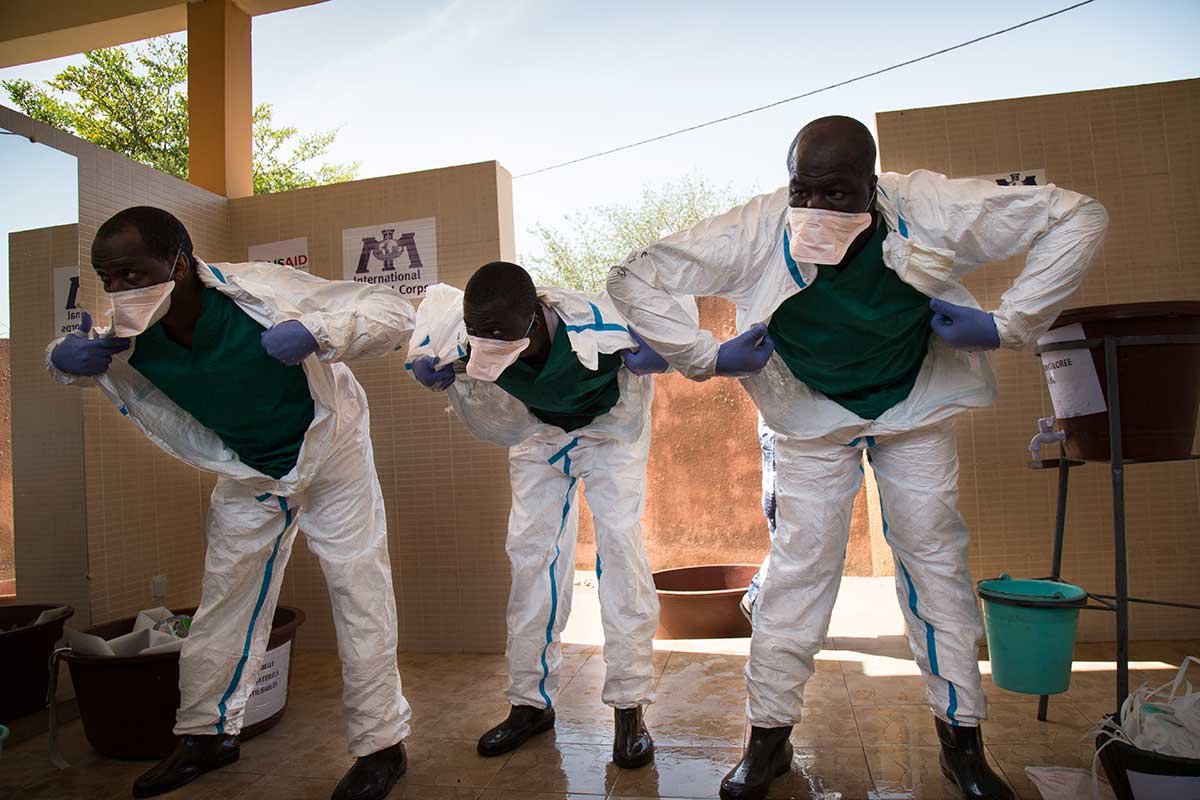 “We supervised all the activities done for the fight against Ebola,” says Dr. Diarisso. “We visited different staff who were trained and we noticed when they weren’t following all the rules correctly, [like] they stopped washing their hands and using gloves. We helped them understand how they put their own life at risk. We taught them again and they finally started to respect the measures.” International Medical Corps also provided supplies to health facilities. “International Medical Corps has been a great partner,” says. Dr. Tapo Ousmane, the medical director of a referral health center in Ségou. “They were the only one who fought with us all along with training and equipment. Others helped, but not at the same level.”

For Dr. Diakite, the combination of trainings and supplies, which included three vehicles and one patient transfer vehicle, helped the entire health system in Ségou be vigilant and ready not just for Ebola, but other infectious diseases, like cholera. “International Medical Corps was definitely the first partner to support education this way,” he says. “It helped changed people’s behavior, like using only one set of gloves per patient and dressing correctly to avoid disease. Today I can say [our system] is healthy.”

International Medical Corps, with funding from the CDC, is now launching an infectious disease surveillance and response program in Ségou and Sikasso regions. The program will build on the work Dr. Niaré and the International Medical Corps team have done over the past year and will strengthen Mali’s wider disease monitoring and response systems through improved reporting, diagnostic and laboratory systems, and bio-surveillance work force.

“I promised to save lives and also save people from pain,” says Dr. Niaré. “This does not stop at Ebola—in the case of any disease we have to work hard to help people.”

The training center was also handed over to CNAM in January 2016, giving the health system a fully equipped facility where simulations can continue to take place so that health care workers and other professionals are ready for Ebola and other infectious diseases.

Dr. Karim, the medical director at Gabriel Touré Hospital, believes now is the best time to improve the health system’s preparedness, as people have seen what devastation Ebola can cause and understand the need to be alert. “It is during peace that you have to get ready for war.”