Inside a youth friendly space, stands 29-year-old Israa Salman El Fadel, an art teacher, in front of a dozen children, all Syrian refugees living in Zaatari camp in Jordan. Children sit around large wooden tables covered with boxes of watercolor paints and long brushes. “Today’s class is more theoretical. I am talking about color interaction and the importance of observation,” she says.

Israa is herself a Syrian refugee originally from Dera’a. In 2013, she fled her hometown with her husband and four children between the ages of two and twelve to seek safety in neighboring Jordan. Since then, the family has lived in Zaatari refugee camp in the north of Jordan.

Her husband was diagnosed with schizophrenia nine years ago. “The illness appeared all of a sudden. We never understood how and why. First he started to be violent. Now he is more withdrawn and taciturn, and he refuses to join us in a conversation. Sometimes, he shouts at us. He is on antipsychotics. But recovery is taking time.”

Back home in Syria, Israa was a kindergarten teacher. After work, her hobby was to draw nature and people. “With my volunteer work with International Medical Corps here in Zaatari, I am thrilled because I combine my teaching skills with my passion for drawing.”

“We had no choice but to leave. Our house was located on the front lines of confrontations. Unknown armed men would burst in during the night, overturning everything in their path. The children were always terrified. Sajida and Hamzi, the two youngest children, experienced the worst. They were crying all the time. One night, we were all ordered to go out into the street, in the cold and rain, until the search was finished. Life became unbearable.” With her nuclear family, Israa took a taxi to the border with Jordan. “The way was not dangerous. We chose to go to Zaatari refugee camp because we cannot afford to pay a rent in Amman or another city.” Five months after settling in the camp, Israa started looking for a job. She applied as a volunteer Arts teacher with International Medical Corps and was hired. 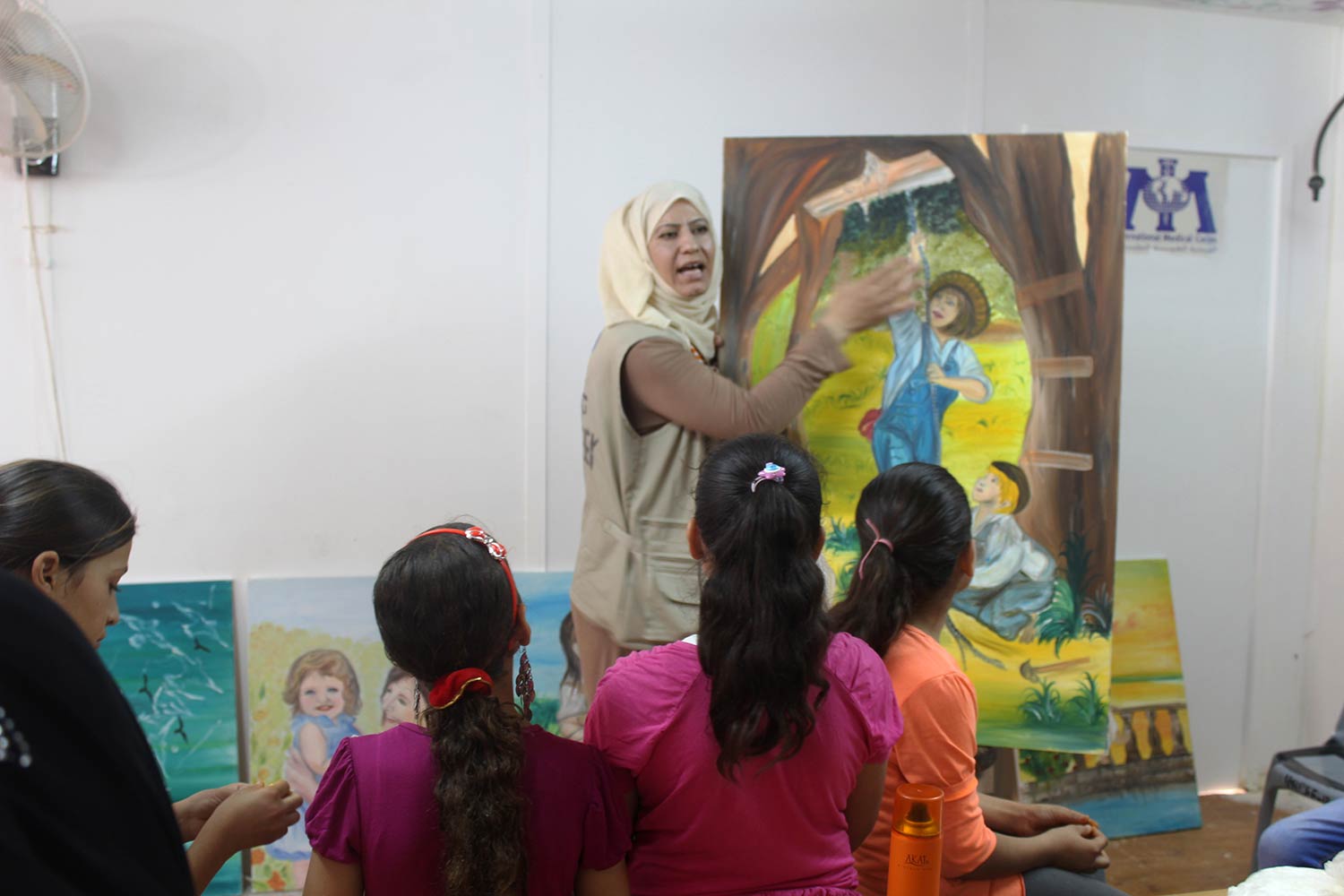 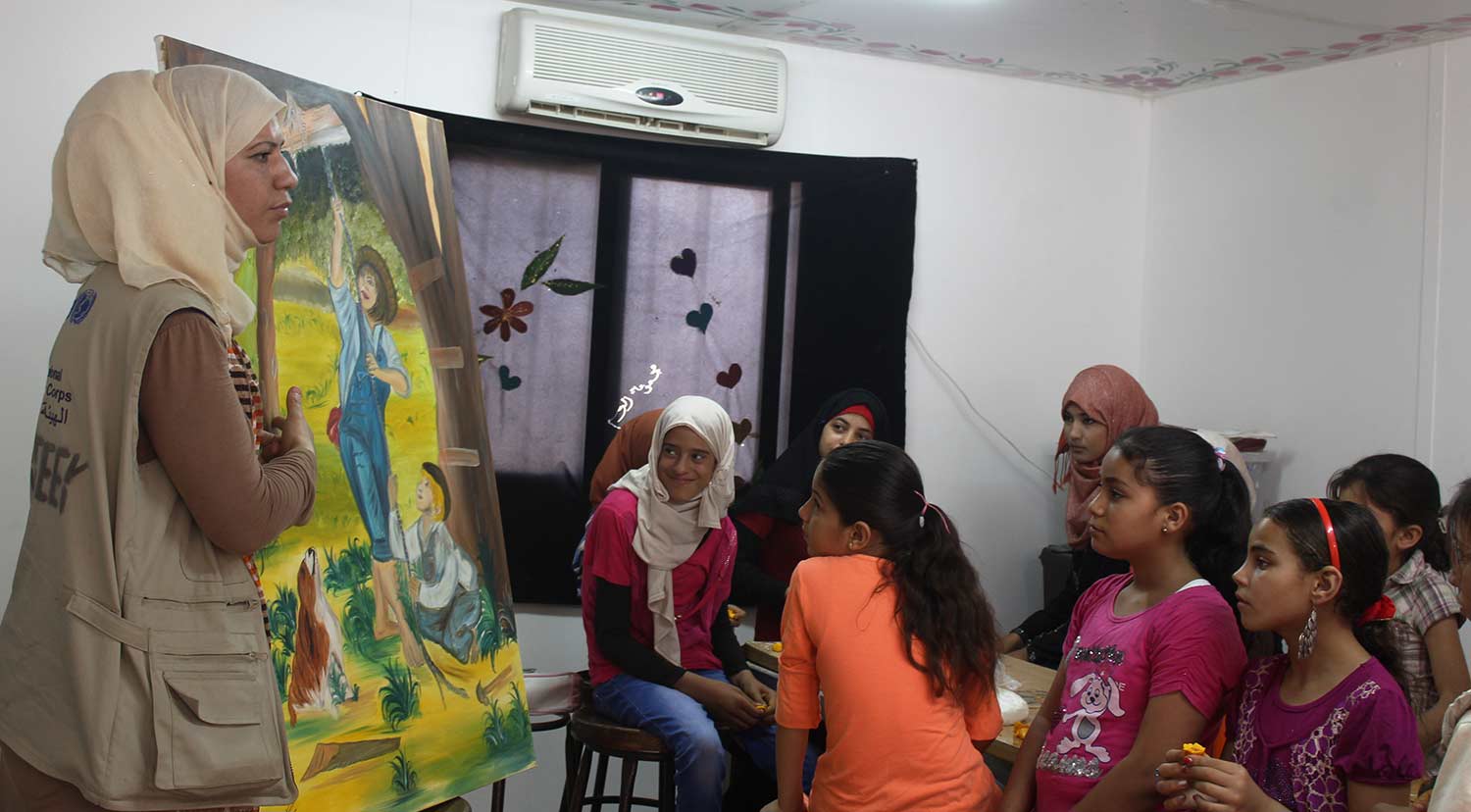 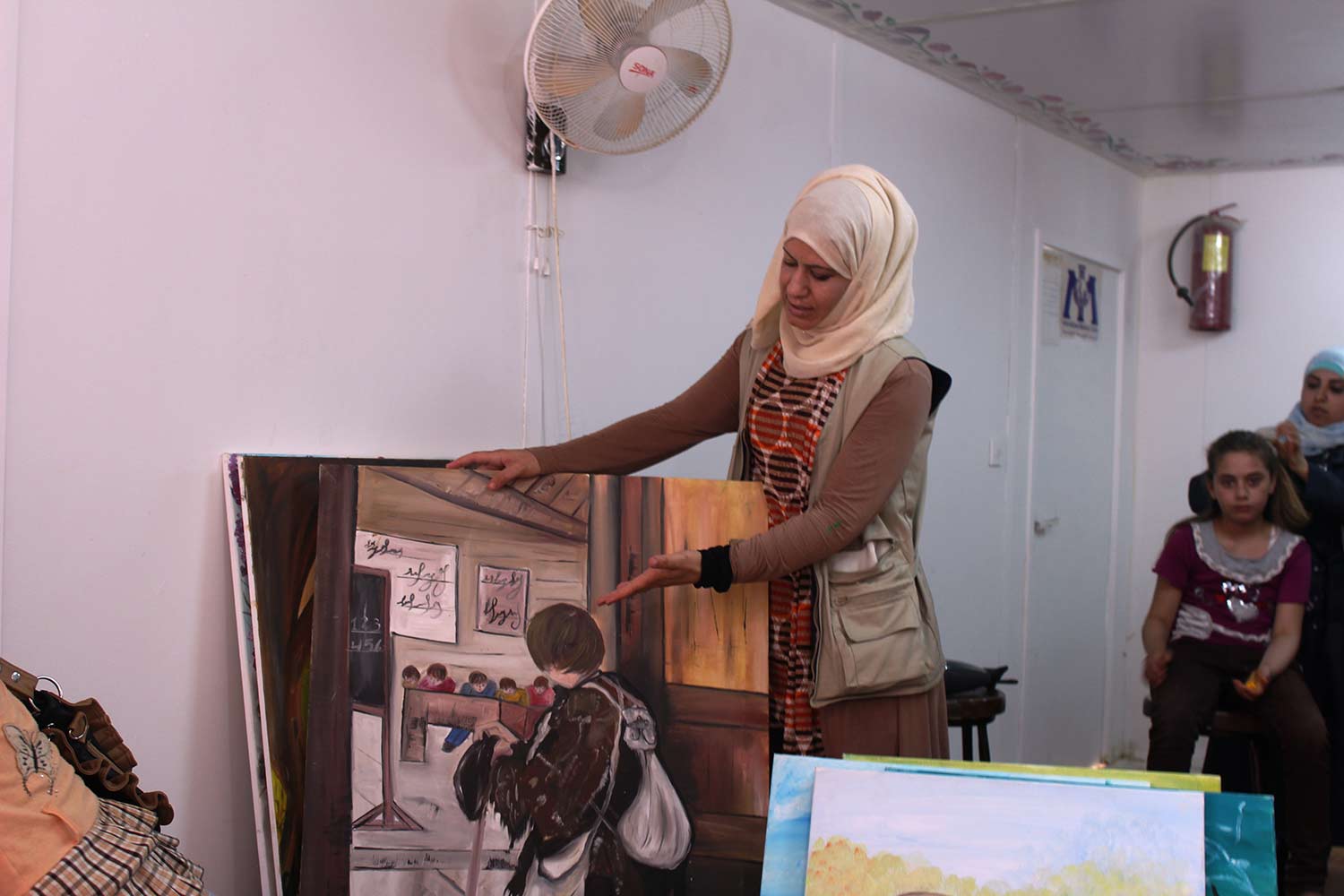 “When I started the arts classes, the drawings of children reflected sadness because they wanted to put on paper their experience of destruction and displacement. They were all about homes destroyed and black and grey colors were mainly used. Today, they paint more colorful things, expressing their dreams of a better future. The class is actually a sort of therapy for children. My mission is to help Syrian children relieve their frustration.”

Last year, Israa’s class showed their paintings through an exhibition in Amman, named Colors from Zaatari. “It was a big success and a chance for children to share their work and highlight their hopes through their drawings.”

Spirited and passionate about her work, Israa wishes to become a professional artist. She has applied for political asylum abroad, hoping to get enrolled in an accredited art school. “Though settling in a crowded refugee camp is not easy, I was fortunate to have the opportunity to do something I love. But because it has become clear: I will not go home. I want to move to Europe or America and perfect my drawing skills. Maybe attend an arts school. I also want my husband healthy as before. I am sure he can get a rapid medical treatment abroad.”

In Jordan, International Medical Corps has been working since 2008 providing primary health care, mental health and psychosocial support services at static and mobile clinics to Iraqi and Syrian refugees as well as vulnerable host populations. In response to the dramatic influx of refugees into Jordan, we have expanded mental health and psychosocial support services throughout the country.

Today, International Medical Corps provides mental health and psychosocial support services, in addition to trainings for partner organizations, at the UN High Commissioner for Refugees’ (UNHCR) Za’atari and Azraq refugee camps, where over 130,000 Syrians now reside. Since over 55% of camp residents are under the age of 18, we are also conducting youth empowerment activities for Syrian teens, aimed at promoting the protection and resiliency of youth as well as their families and communities. In 2013 alone, 32,000 children under 18 benefited from International Medical Corps-run child friendly spaces at the camp.