On August 4, 2020, I was at home, sitting at my desk, when the floor shifted beneath me. My apartment walls rattled, the balcony door in the living room came off its hinges and the glass panels separating the living room from my home office shattered.

Though it felt like an earthquake, it was not. A warehouse full of ammonium nitrate at the port of Beirut had exploded, creating a shockwave equal to a magnitude 3.3 earthquake. My parents were visiting, and when the shaking subsided, I remember my dad standing in the doorway of the living room, looking down at the broken glass littering the floor. My mom, already in the living room, looked at me and we both burst into tears. My dad put his slippers on and walked carefully through the glass to sit next to my mom. Both of their faces were pale, shocked and scared. I had never seen them look like that. 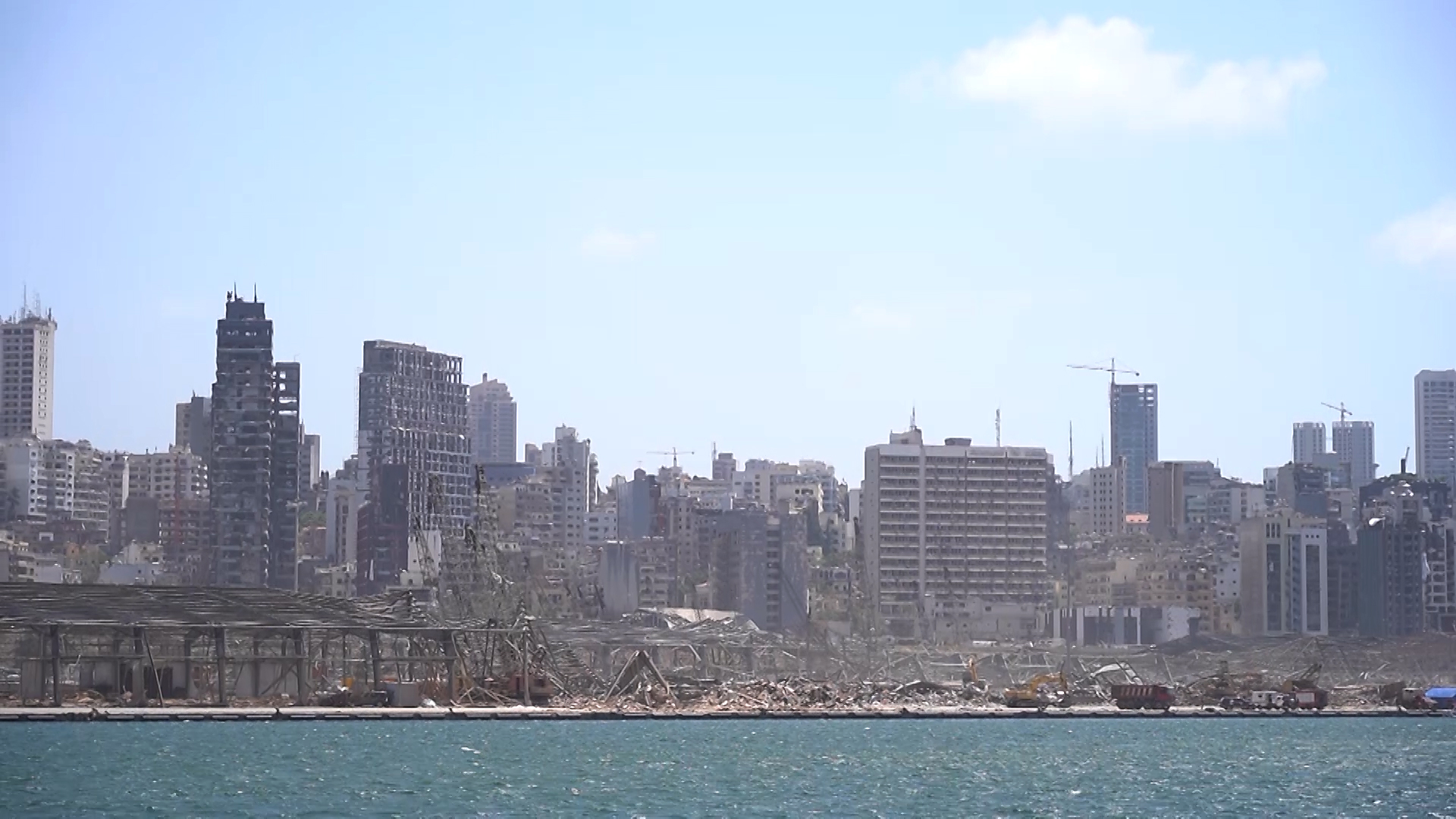 Destruction caused by the explosion in the port of Beirut on August 4, 2020. 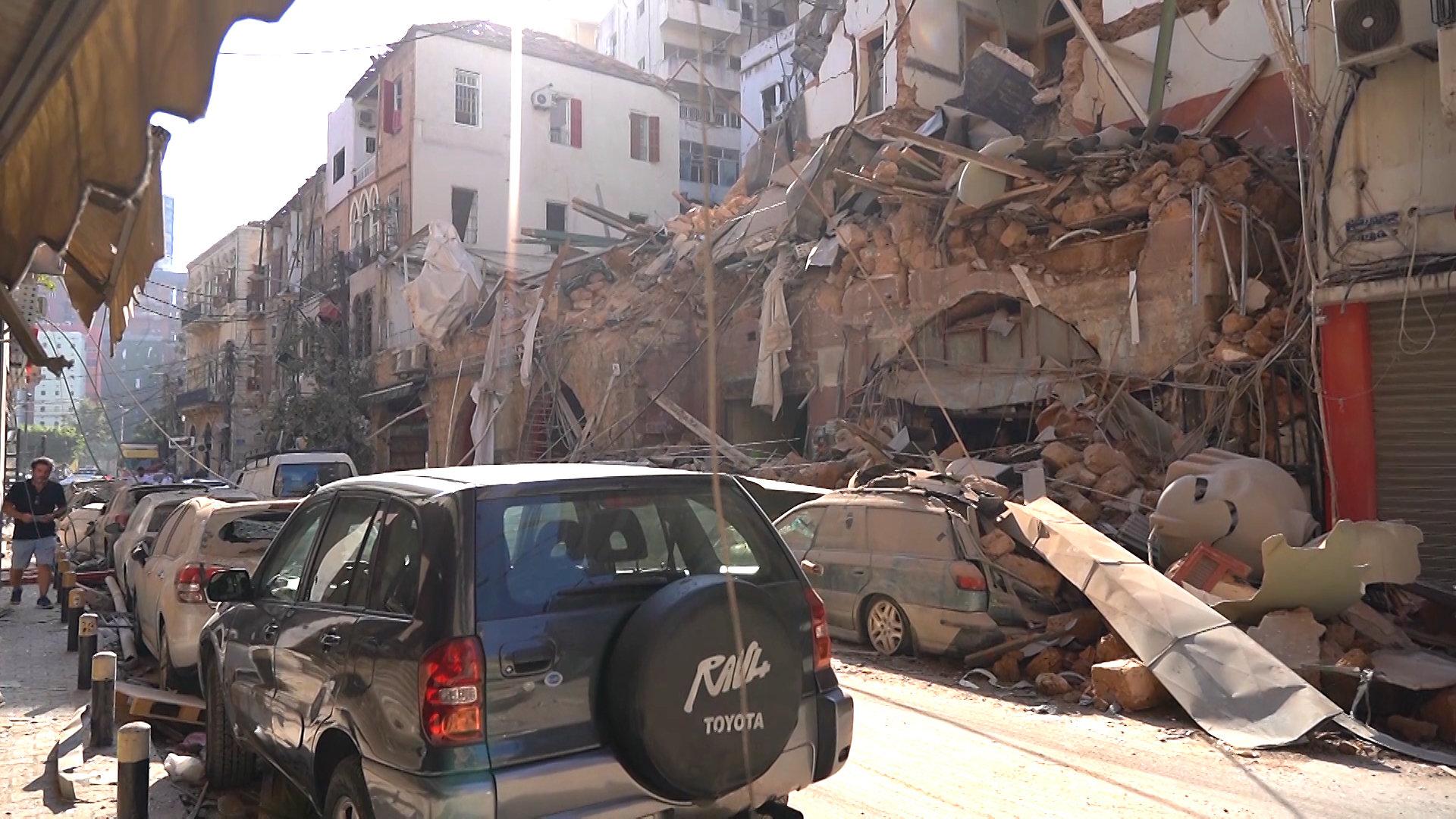 Destruction caused by the explosion in Beirut on August 4, 2020. 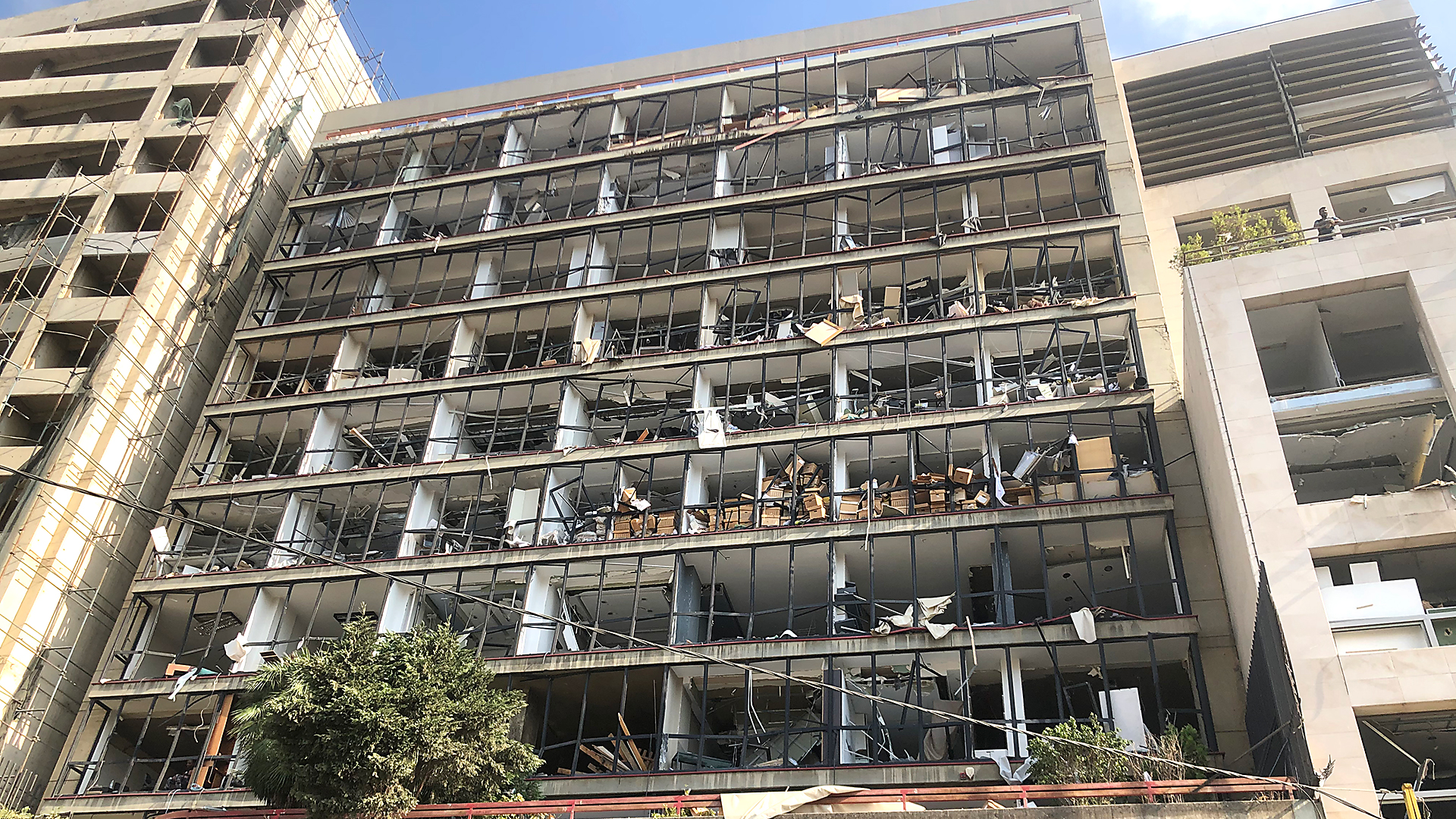 Destruction caused by the explosion in Beirut on August 4, 2020.

About 20 minutes later, we started receiving WhatsApp messages with news and videos of the explosion. Information was pouring in from everywhere, full of confusion, damage and dead bodies. It was horrifying, but also felt familiar. Growing up in Lebanon teaches you to be prepared for the worst, because it’s always a possibility. In the year since the blast, I’ve thought about how I prepared for and reacted to one of the greatest national crises in my lifetime—a catastrophic explosion in the midst of the COVID-19 pandemic—and what it means to be Lebanese.

At an early age, I learned how to say goodbye to people that I loved. We had cousins and friends who left the country and have yet to return. I learned to live with uncertainty—electricity comes and goes, as does clean running water. I learned that death was unavoidable, and that it could strike at any moment. It wasn’t talked about in hushed tones or shielded from the ears of children; it simply was a fact of life. The Earth is round, the sky is blue and we all must live with loss. These lessons built a natural resilience and resourcefulness not just in my family but across Lebanon.

I was born in 1986, the youngest of three children. This was four years before the official end of Lebanon’s civil war, which lasted more than 15 years. I have one vivid memory of the war. It was during the last battle—the last round of fighting before the opposing sides reached a settlement. We were in our family home, where I was born, when the shelling started. There was a linen closet in the hallway leading to the bedrooms. My mom told me to hide in the closet and sing to myself, so I did. I sang an old lullaby in Arabic about a girl called Rima, trying to keep up with the melody playing in my head while the walls rattled around me. Eventually, the shelling ended, and my parents told me it was safe to come out.

I grew up in Beqaa, one of the governates in Lebanon, about an hour outside of Beirut. Though political instability loomed, it didn’t dominate my childhood. It’s hard to describe what it’s like to live every day with a backdrop of uncertainty and the constant threat of war. It’s something you get used to—watching people leave the country for better opportunities, seeing conflict on the nightly news and enduring the underlying tension of living in the Middle East. We still lived our lives every day, though. As a child, it felt normal.

After high school, I went to college and then moved to Dubai to work at an advertising agency. The job was fine, but it wasn’t fulfilling. I returned to Beirut four years later, in search of connection and meaning. Eventually, I got an internship at a humanitarian aid organization, which led to my career in nonprofits. Over the next several years, I worked with organizations that focus on capacity building and social justice, including a grassroots organization that fights for women’s rights. It quickly became clear that this was where I was supposed to be—living in Lebanon near my family and helping others.

In October 2018, I joined International Medical Corps as Communications Manager for its country operations. I knew that it was a dream job—working for an emergency response and humanitarian aid organization with programs that span from mental health to primary healthcare. But I didn’t realize how important my job would be until the explosion.

With Beirut devastated by the blast, International Medical Corps immediately deployed staff and volunteers to provide critically needed healthcare and support to affected people. The explosion killed more than 200 people, injured more than 7,000 and left approximately 300,000 homeless—including at least 100,000 children.

Thankfully, our warehouse and vehicles were not damaged, so we had access to medical equipment and supplies, including medicine and personal protective equipment (PPE), which we provided to health facilities. We sent mobile medical teams into communities throughout the city to provide medical and mental health services, and supported about 50 facilities providing primary healthcare, helping them recover and rebuild after this traumatic experience. And, given the pandemic and the potential for the virus to spread among the displaced and those working to help, we distributed PPE to thousands in need. 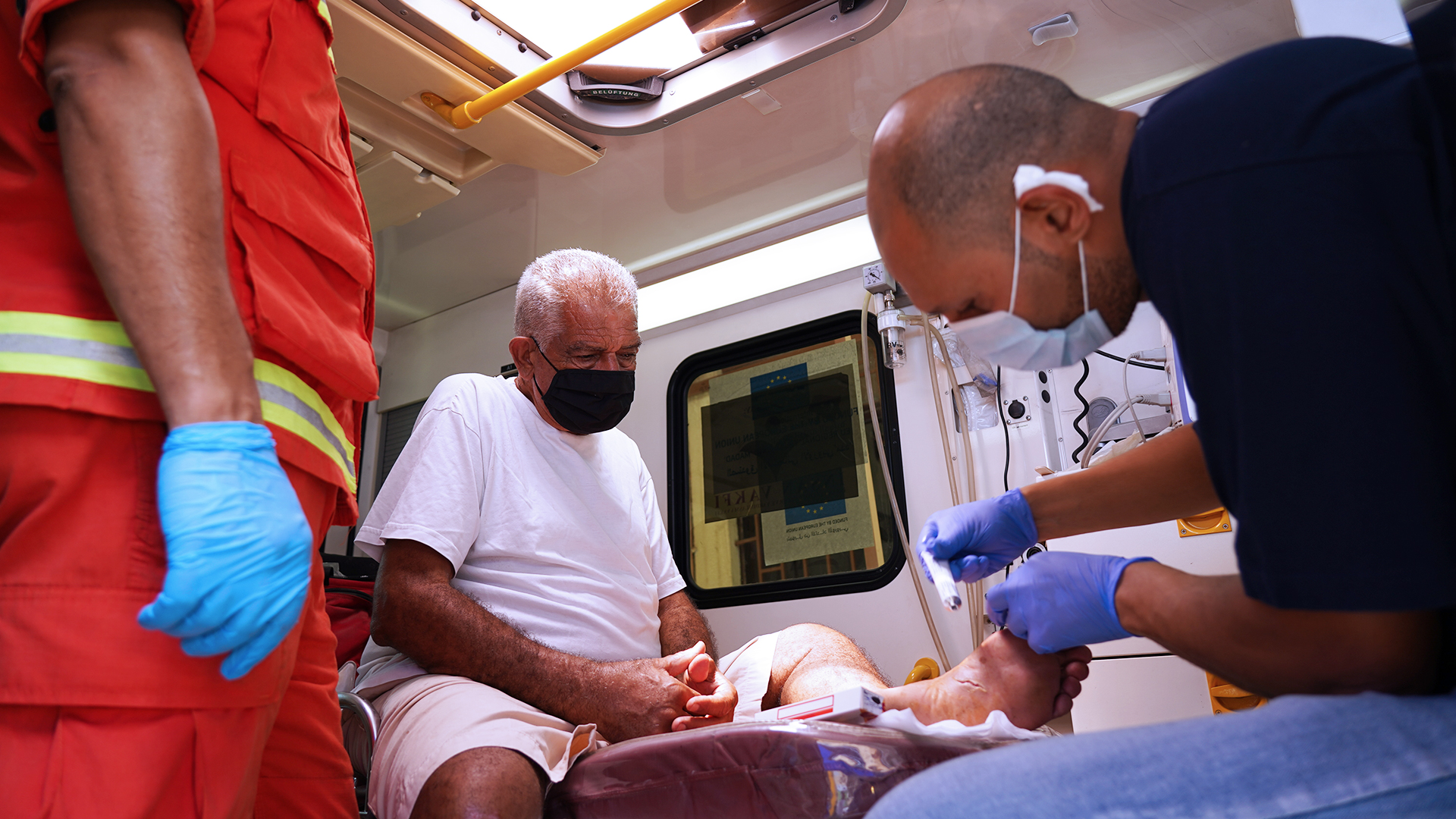 On August 9, 2020, Rabih, a health officer and a registered nurse who usually works for International Medical Corps in the south of Lebanon, was deployed to Beirut to help with the emergency response in the wake of the port explosion. Here, he treats an elderly patient at the Mobile Medical Unit deployed to the Karm El Zaytoun neighborhood. 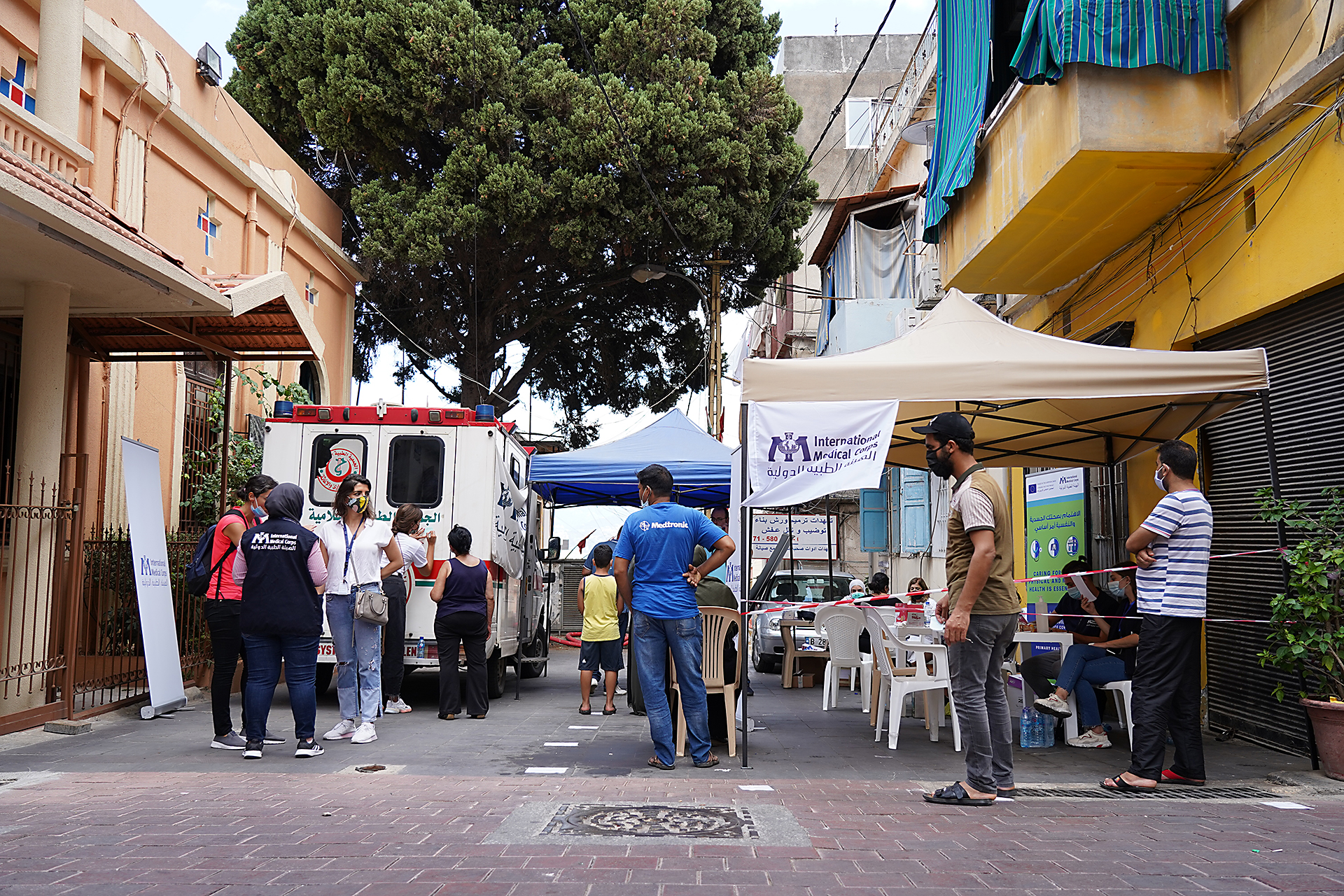 On August 9 and 10, 2020, International Medical Corps deployed a Mobile Medical Unit and a Mental Health Unit to Karm El Zaytoun, a neighborhood damaged by the port explosion in Beirut. The mobile units offer primary healthcare and psychological first-aid services to those affected by the disaster. 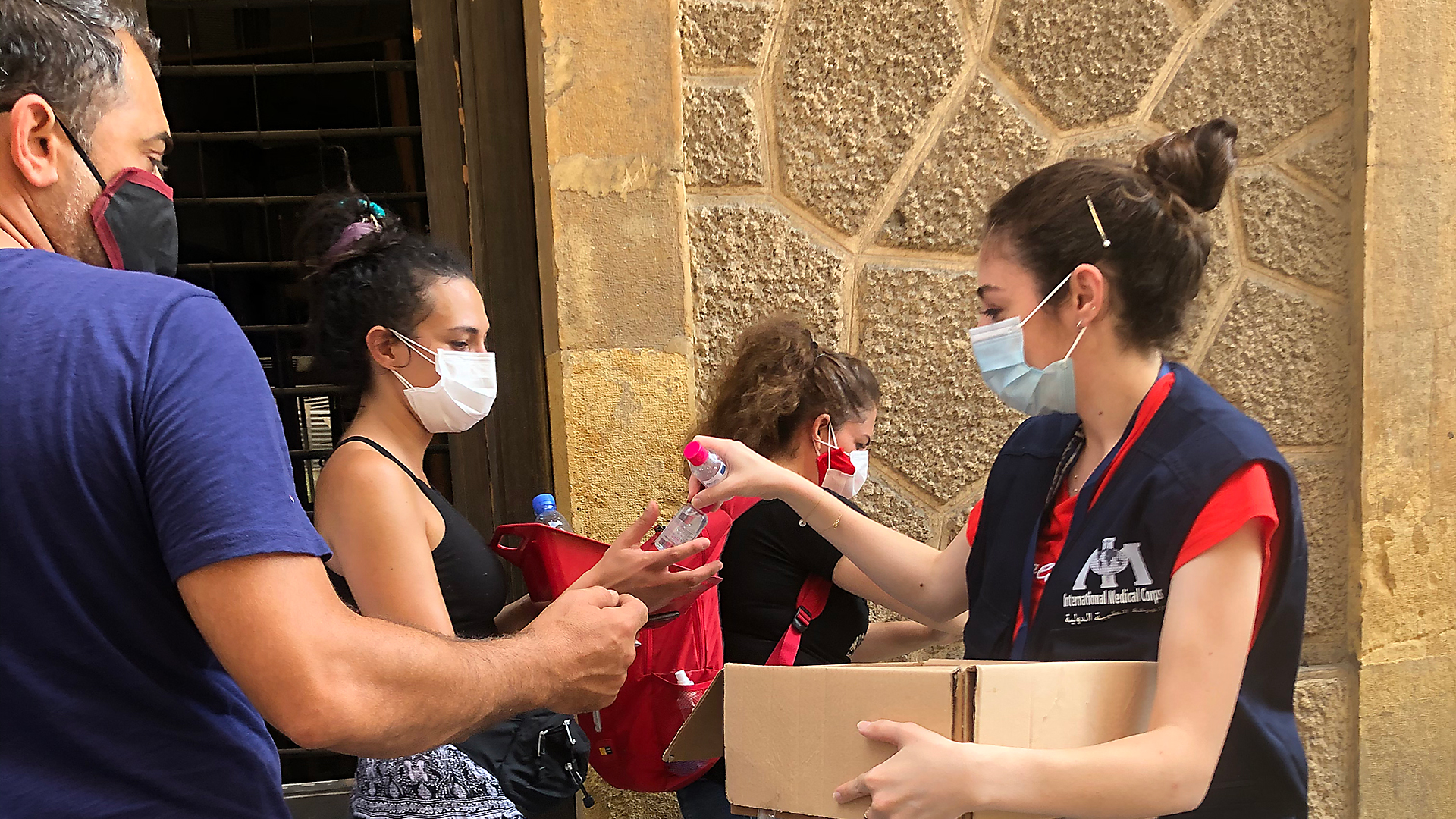 Lama, a disability officer for International Medical Corps, distributes hygiene supplies to volunteers who are cleaning up areas in Beirut affected by the port explosion. The supplies help prevent COVID-19.

I found out later that our office was severely damaged. Due to the COVID-19 pandemic, our staff had mostly been working from home, and though a few staff members were injured, there were no fatalities. But when I saw photos of my work area, I quickly realized that if I had been in the office that day, I could have been crushed in the rubble. 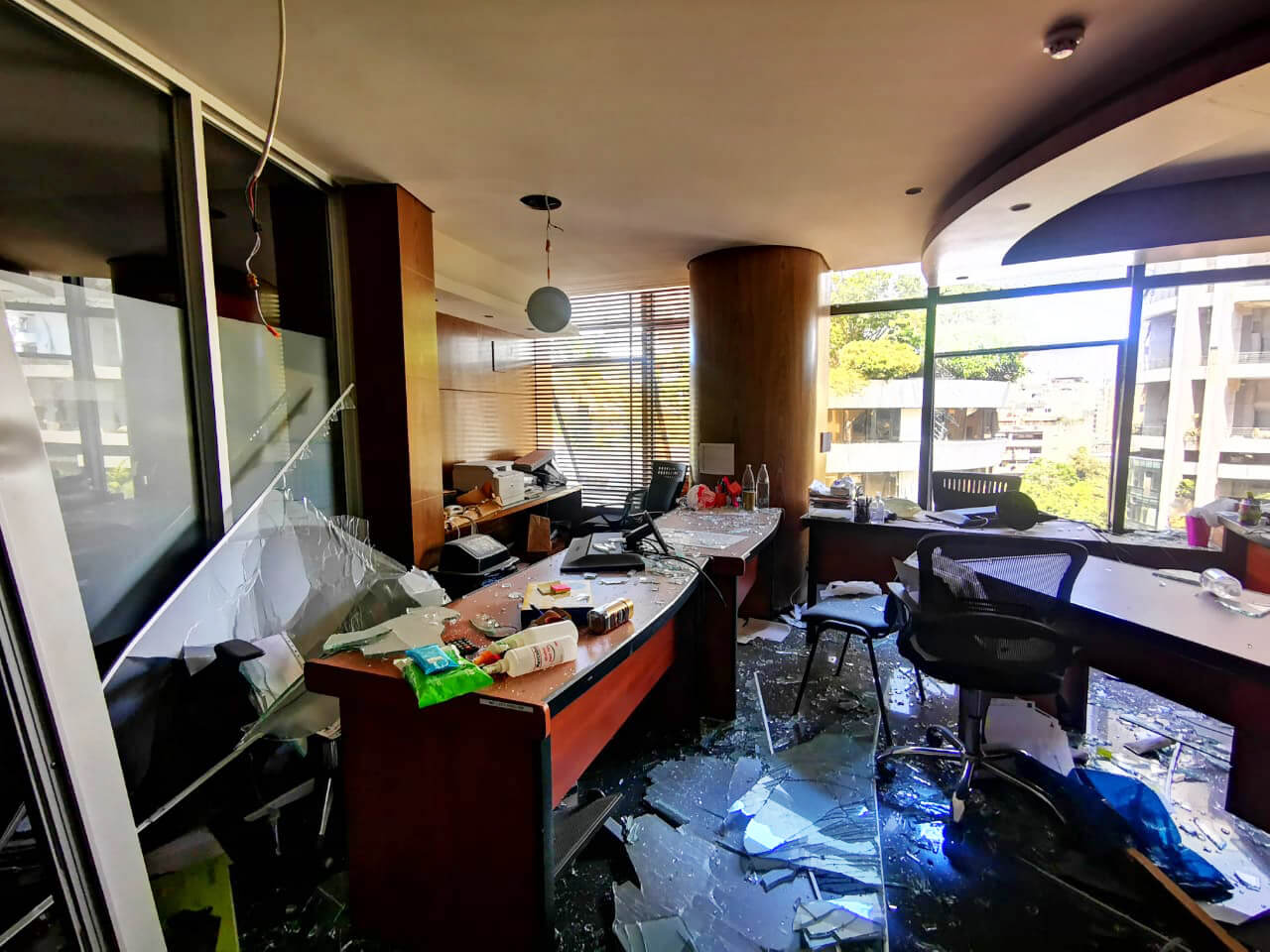 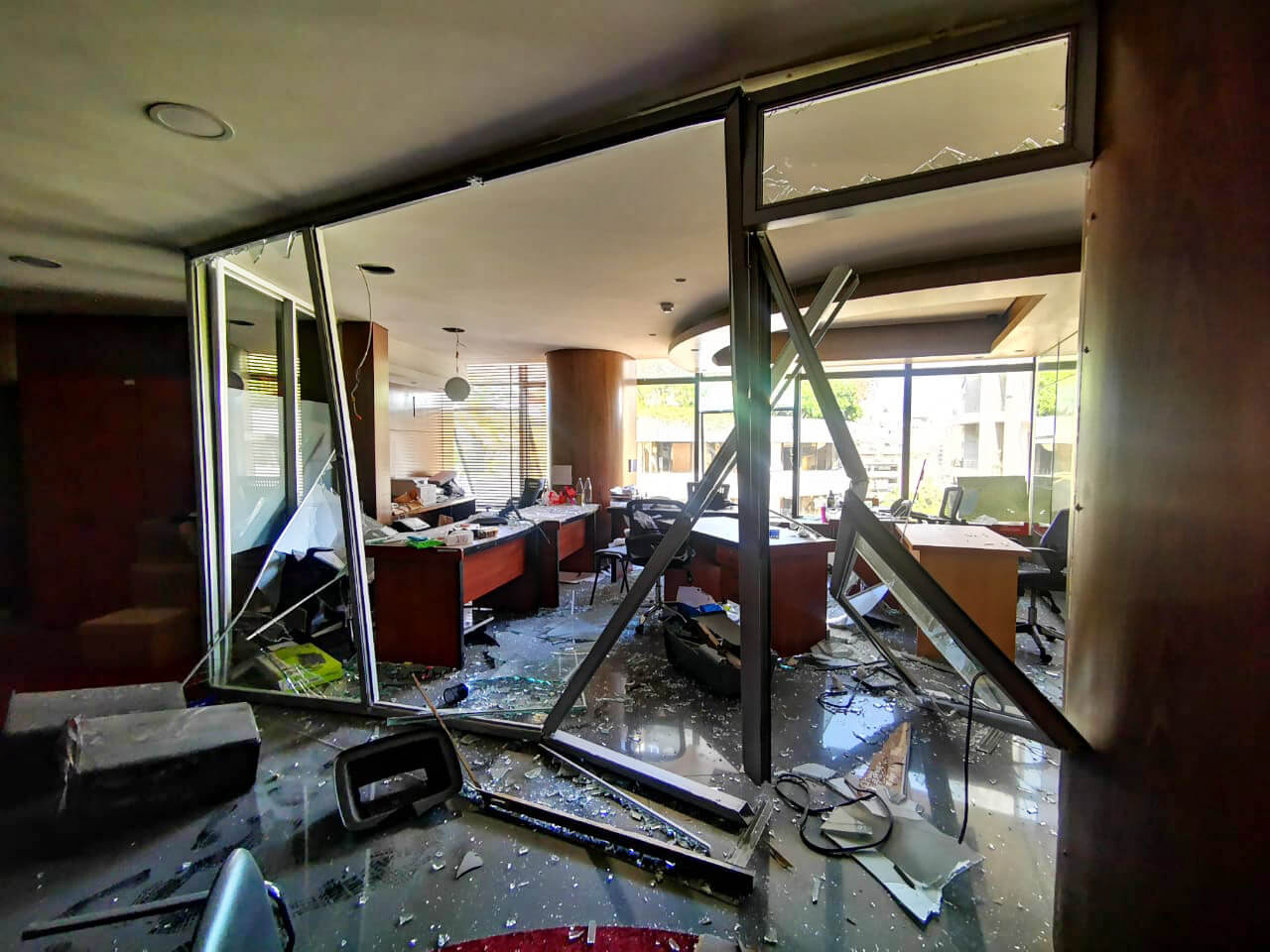 Looking back at that time, I’m struck by how everyone immediately flew into action to help one another and rebuild. It felt preordained in some way—that, after growing up in a country recovering from war and constantly under the threat of social upheaval and conflict, we knew how to respond.

Lebanon is not only my home. The people are my people, the food is my food and its challenges are my challenges—including the Arab Spring, the Syrian refugee crisis and the Beirut port explosion during the COVID-19 pandemic.

It took this explosion to show me that, despite decades of insecurity, the fabric of Lebanese society is something that will never be torn apart. We all have a linen closet story and a time when we saw fear on our parents’ faces. We have all learned to live with loss—but we will never let it define us.

Mental Health Care in Jordan Is Just a Click Away

A woman we’ll call Samah is a 38-year-old Jordanian working at a local university. She is divorced and lives...