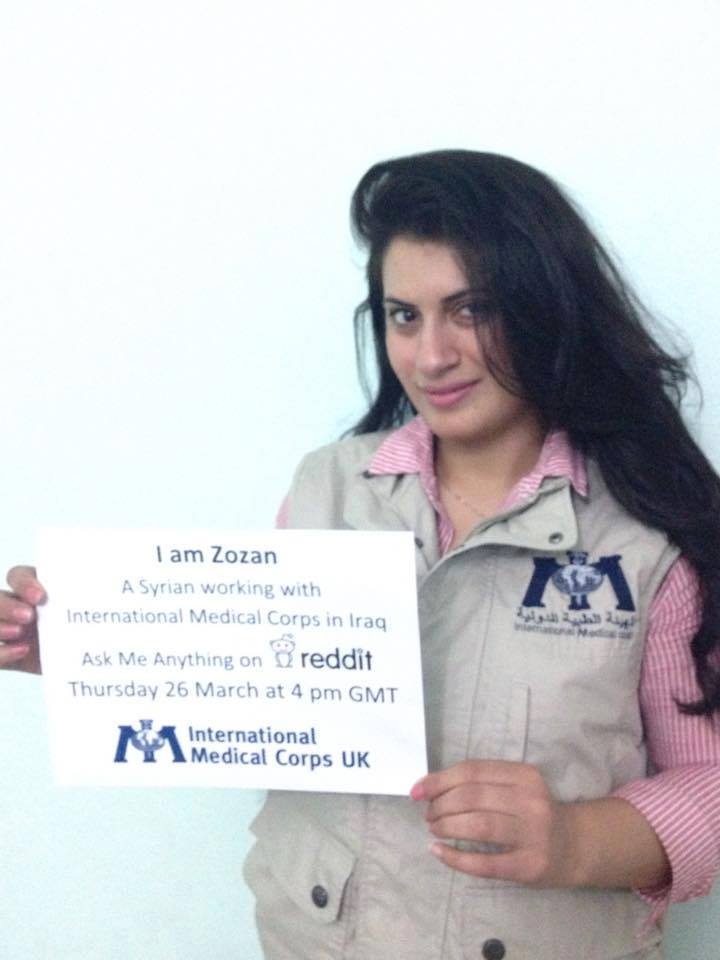 Julie Davidson, the Assistant Country Director for International Medical Corps’ programs in Iraq, recently joined Zozan to answer questions in an AMA (Ask Me Anything) on Reddit. They answer question about what life is like for those forced to flee their homes and how Syrians are working with International Medical Corps to help others cope with the impact of war. Read a selection of the Q&A below or click here to read all 281 comments!

Q: First off, thank you for doing such meaningful work. What you do is incredible. Is there a lot of negative stigma around mental health and counseling with the people you are aiding?

A: (Zozan) Thank you for your supportive words. We do sometimes encounter a negative stigma around mental health, but we use outreach awareness raising activities to sensitize (for want of a better word) some of the populations with whom we work, with a view to ensuring those that need our mental health services are comfortable doing so.

Q: Hi Zozan, for Syrians who come directly to these refugee camps having experienced mortar and artillery shelling, have they developed symptoms of PTSD? If so, how is it being treated? Most people associate PTSD solely with combat fighters. However an argument could be made that more stress is put on displaced civilians in areas of conflict.

A: (Zozan) There are of course many people who have experienced the situation you describe – including myself. For those who experience PTSD and similar symptoms we use trained and experienced psychologists who provide one-to-one counseling sessions. I don’t get directly involved myself as it is an area for the professionals!

Q: It feels like so many people are having to leave Syria and the war shows no signs of stopping. Is there enough support in Iraq for all the people having to seek refuge there?

A: (Zozan) It is a complex situation and it seems it will continue for some time yet. There has been good support from Iraq for people in my situation, but I understand that there are some funding gaps and that more help is needed. There are lots of good charities working in the region that could use more financial support!

Q: Hi Zozan and Julie, What can you say is the biggest need for the people that are fleeing the area? Also, out of what you have seen, do you think Kurdistan could work as a functioning country and government?

A: (Julie) Most of the people who flee come with nothing. In the fall, over 10,000 additional Syrian refugees arrived from Kobani in northern Syria. They first fled north, into Turkey and then traveled eastwards overland and then entered Iraqi Kurdistan. These people arrived with nothing. I think it is important to remember that people, before the war, were leading lives similar to what we do in the west. They had/have houses, cars, businesses, family homes, etc., but often arrive to these camps with very few possessions except for what they can carry.

Q: Can you come to a first world country to make a life with no threat of war?

A: (Zozan) Being where I am now, although both difficult and challenging, allows me to work with people who need humanitarian assistance. Therefore, I am keen to stay and give 100% to help International Medical Corps’ work in the country. I hope one day I can return to Syria when there is no war.

Q: Does this role fulfill your desire to become a teacher? Are you able to implement teaching into your Program Officer position?

A: (Zozan) I always wanted to be a teacher, and it is still important to me, but now I am committed to the work I am doing. I would like to work in this kind of role in the future. Hopefully in a peaceful Syria.

Q: Is it possible to come to your camp and help out? Or are you better off with our money than our, inexperienced, support in the field?

A: (Julie) There is room for people to come and help out; however the people the most needed are those with technical skills – engineers, doctors, mental health professionals, educators, etc.

Q: Are there things you think Americans or the West simply do not understand? Is there anything the American people can really do to effect things positively in the region?

A: (Julie) One major challenge that all organizations are facing is continued funding for programming in the region. In Iraq we are responding to the influx of 240,000 Syrian refugees, as well as the 2.3 million displaced Iraqis. Organizations are providing a variety of services that meet basic and lifesaving needs including health, shelter, food, water and sanitation, education, mental health, psychosocial support, etc., and are in need of international support through both funding and advocating on behalf of these populations.

Q: Do different groups within Syria tend to escape to different countries in particular, or is it only a matter of fleeing to the closest border available?

A: (Julie) People flee for different reasons – sometimes it’s the closest border, sometimes it’s where they have family or friends that may be able to support them. A lot of people have been displaced within Syria first, before crossing an international border. So where they started and what country they end up in, may be far apart.

Q: There’s currently a lot of horrific stories about human rights violations in Syria in the press, do you have any positive stories to tell?

A: (Julie) A lot of our staff are themselves displaced. When we thank them for the work that they do, they often say “of course we are happy to help, we are just like patients and the people we serve”. Considering what our staff have been through themselves, and how hard they work, to have such a strong sense of the humanitarian mission, seems like a daily victory.

Q: Do you hope to ever return to live in Syria one day or do you think it would be possible in your lifetime?

A: (Zozan) Yes. This is my dream. Until then I will work with International Medical Corps to help displaced Syrians and Iraqis in the KRI. Or maybe even a different continent – my passion is to help those most in need of help.

Q: Geographically whereabouts are the camps you work in/with located in relation to ISIS’s territory? – What is the Iraqi government’s policy towards Syrian refugees? Are they permitted to find jobs in Iraq to support themselves and their families? – What is the demographic break down of the Syrian refugee population in terms of age and gender? Is it mostly women and children?

A: (Julie) In Iraq there are 9 refugee camps, but actually, most of the Syrian refugees live in urban areas. Some of the camps are less than 75km away from some of the frontlines. Syrians work – mostly as day laborers and many work within the camps themselves. For example, IMC has hired dozens of medical personnel to work in the clinics we operate in the camps. This gives them an opportunity to earn a livelihood. In terms of demographics – 46% female and 46% under the age of 18 (thanks UNHCR for the quick stats on the website!)

Q: Thanks for your work and doing this AMA. What do you want us to take away from this AMA? How can we help in ways other than writing a check?

Q: Thank you for doing this. Is there an idea where the refugees of this (and several other) wars will go? Is the rest of the world accommodating this? It’s heartbreaking.

A: (Julie) Only a small percentage of refugees are ever resettled. For example, Canada announced earlier this year that it would resettle 10,000 Syrian refugees over the next 3 years. When there are an estimated 3 refugees in the region, this number is a drop in the bucket. Most refugees will return when the conflict ends, or may (try to) stay in the countries they are currently residing.

Q: I have this internet friend who has fled from Syria to Jordan, but for some reason frequently returns to Syria with his family for one reason or another. Is that a common thing? What would cause people to do that kind of thing?

A: (Julie) It is actually common. I was living in Lebanon prior to moving to Iraq and there were hundreds of people who would cross the borders daily. Initially it was difficult to keep track of those who were arriving for the first time and those who were returning to Lebanon. Many people would return to check on their belongings, bring documentation they had forgotten their first trip, buy medication for specialized conditions that was cheaper in Syria, etc.

Q: Hi Zozan! How is the conflict affecting your work in Irak? Between the Shia militias, the Army, Daesh and the Kurds, there must be a lot of instability and skirmishes. Do you think you are at risk working where you do? If yes, from who?

A: (Julie) Replying on behalf of Zozan, who has unfortunately experienced a power cut – common here in Iraq. International Medical Corps takes precautions in all areas of operation. While it is not without risk, we do make sure to monitor the areas where we work and put in strategies to mitigate these risks. The biggest threat aid workers often face is car accidents.