Violence against women is endemic in every corner of the globe. Rape and sexual abuse violate the bodies, minds and hearts of women and girls—and this tears at the fabric of households and communities wherever it occurs.

Though International Medical Corps works tirelessly to treat survivors of gender-based violence (GBV) in places where little to no such care exists, we know that no single organization can solve such a complicated problem. The true healing—and the necessary end to this violence—must come from within, through all of us working together.

To create lasting change with systemic implications and to multiply the impact of our humanitarian interventions, International Medical Corps embeds training, education and awareness-building into everything we do. For our GBV programs worldwide, this means sensitizing communities to the consequences of GBV, training frontline health workers to support GBV survivors, building the capacity of local and national institutions to respond to GBV, fostering economic empowerment for women, educating and engaging men and traditional leaders, and much more. As we transfer knowledge, skills and institutional capacity to local communities, we help to strengthen critical support systems for women and girls in radically underserved areas while challenging and changing the detrimental attitudes and behaviors that contribute to GBV.

Conflict and economic uncertainty over recent years in Ukraine have exacerbated violence against women within a highly patriarchal culture where, according to our GBV Manager Enisa Eminovska, many believe that rape within marriage is not possible. Though sexual abuses here typically take the form of intimate partner violence, the high military presence in conflict-affected areas feeds the practice of “survival sex.” International Medical Corps has been providing GBV programming in more than 30 extremely remote, conflict-affected villages in Ukraine since 2016, and is currently the only service provider in these areas.

Because fear of punishment can keep women in Ukraine from reporting sexual abuse, International Medical Corps has been working to create a national system for confidential reporting. In addition to direct services offered to survivors of rape and abuse, we provide psychoeducational services to adult women through a 16-week GBV program that covers such topics as women’s health, self-love and self-esteem, gender stereotypes, causes and consequences of GBV, intimate partner violence and more. We also provide training on GBV core concepts and safe referrals for village council members, school staff, community club directors and others, aiming to sensitize people in positions of power about GBV while encouraging them to take a proactive role in prevention. 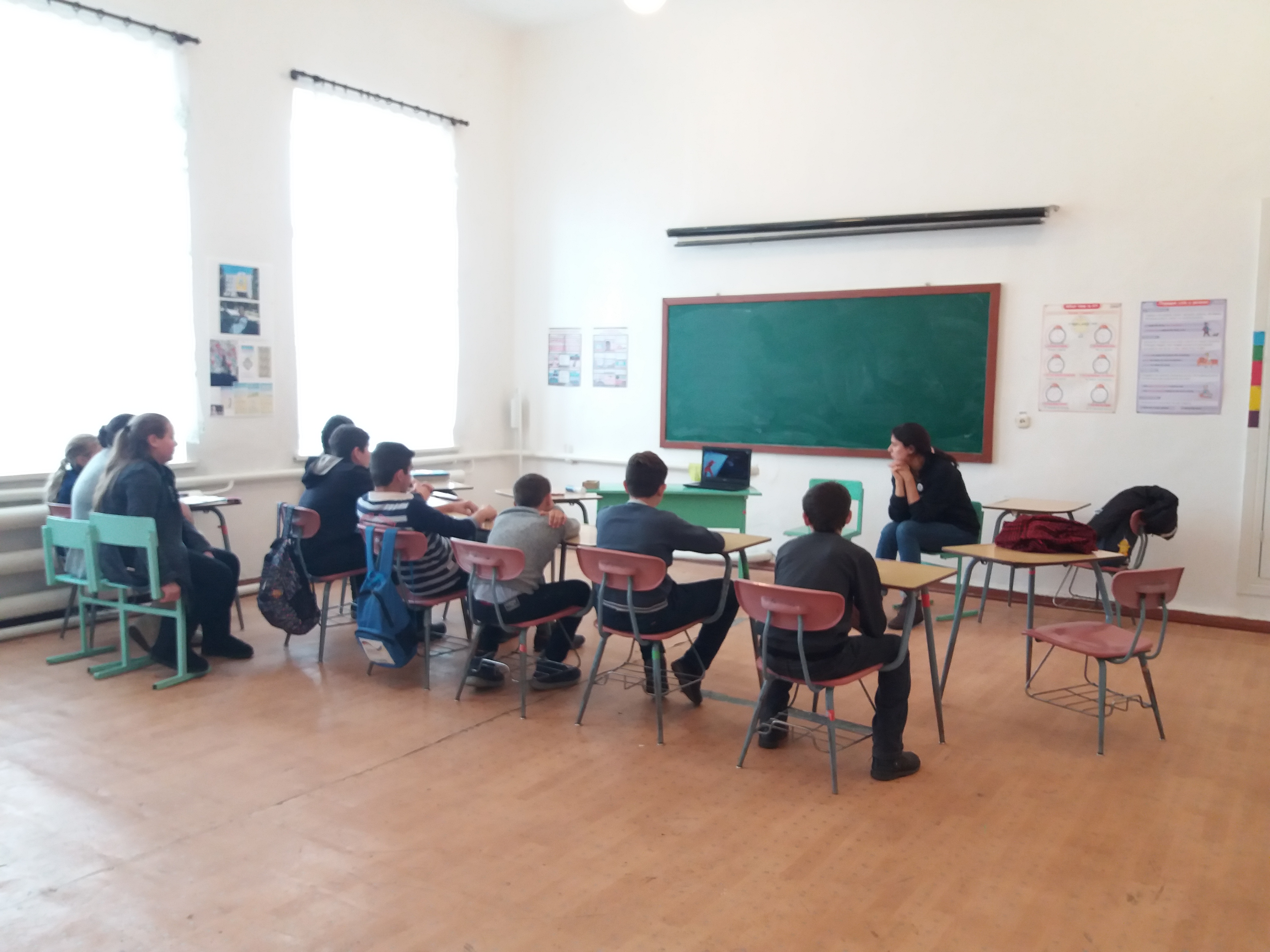 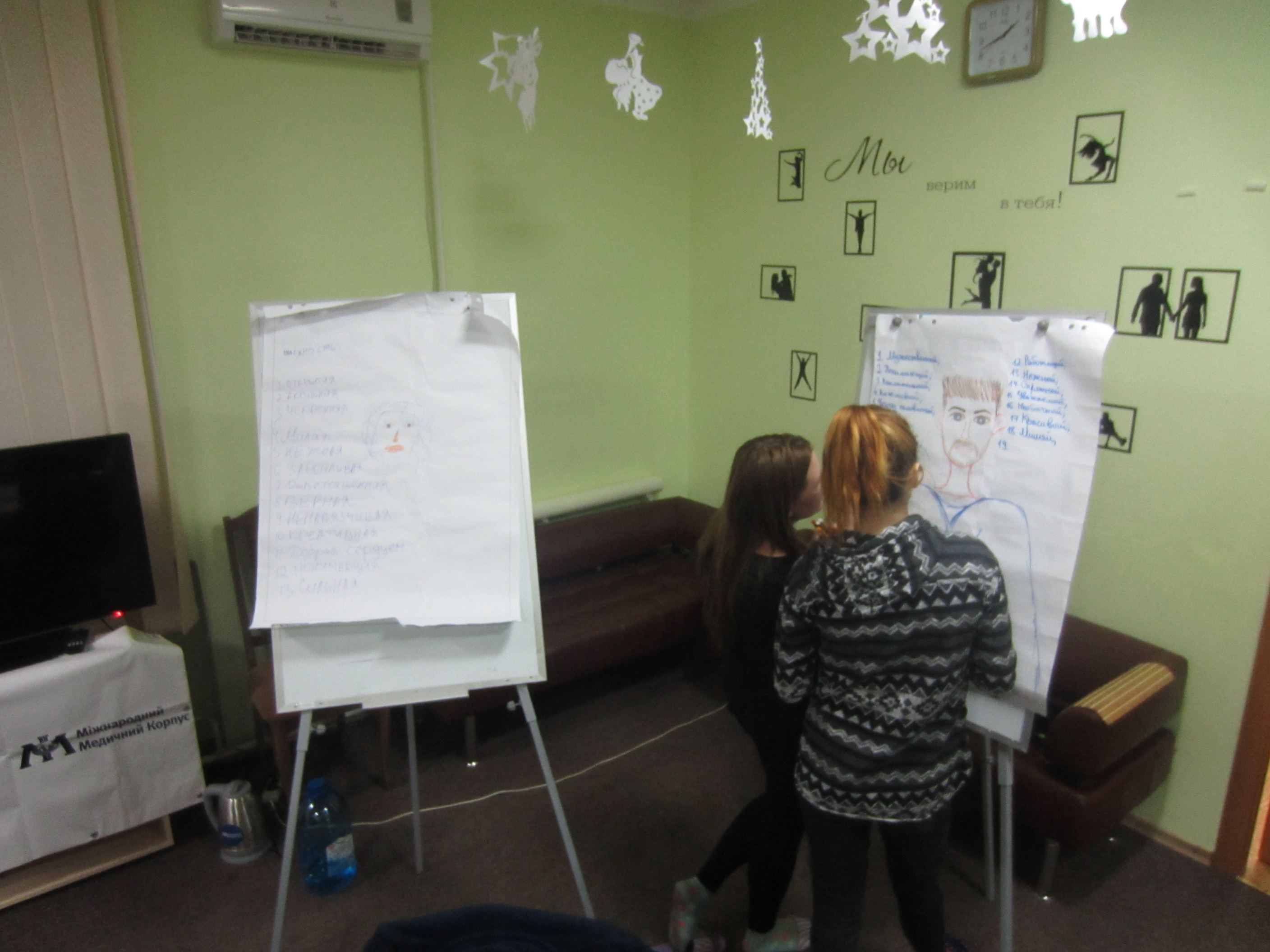 Meantime, our men’s clubs engage men and boys in a 16-week program that helps them recognize stress factors and identify coping strategies, then helps them explore their roles as men and their responsibility to create safe environments for women by working to eliminate all forms of violence. We reach out to young people through programs that address gender roles and gender equality, date rape and other forms of violence, including violence in the home. Recently, local police reached out to our team for training on how to strengthen community-friendly policing, including visits by mobile patrol units to schools and sports events where officers speak with young people about how to report and end GBV and other violence.

To help raise awareness about GBV and how to end it, we train community outreach workers on how to speak with their neighbors about their needs and link them to our GBV services and programs, and how to create referral pathways that can be used once our programs end. Though it can be quite challenging to convince men about the importance of our GBV curriculum—particularly in the midst of war and a culture that enforces toxic forms of masculinity—according to Enisa, our most difficult work often involves changing the attitudes of women. Too often, a woman will tell her, “It is easier to lay down and let my husband get it over with, especially if he is drunk, than go through two hours of arguing and hitting in front of the children.”

Changing harmful attitudes and behavior that have endured for generations is a long-term and complex mission. But we are making progress. At the end of each GBV training session, Enisa says that participants begin to question how they do things, support one another and encourage others to speak up when they see abuse or harassment. In turn, each of these people can reach out to others with critical messages that challenge toxic gender norms—affecting many more people than we would reach on our own.

Since 2016, International Medical Corps’ GBV team in Ukraine has served 3,000 beneficiaries in more than 30 remote settlements on the frontlines of conflict.

GBV prevention and response represents one of the largest programs implemented by International Medical Corps in South Sudan, where we have served conflict-affected populations and displaced people since 1994. According to Charles Oryem, our Economic Empowerment and Livelihood Program Manager in South Sudan, many rape cases occur when women leave the “Protection of Civilians Sites” (PoCs) to collect firewood and water, or when their husbands get drunk and turn violent. Women’s economic dependency on men, combined with gender norms that dictate their subservience, leaves them largely powerless to hold perpetrators of GBV accountable.

To help GBV survivors and other vulnerable women create financial independence, our teams in South Sudan run economic empowerment programs that provide training on business management and leadership, followed by startup grants and ongoing mentoring. As a result of this training, women who previously depended on food aid gain the ability to support many of their families’ needs, such as medication and school fees for their children. This in turn gives them more leverage within their households and makes them less vulnerable to violence from their partners.

In addition to economic empowerment, International Medical Corps provides gender discussion groups that engage both men and women in an effort to shift power dynamics in the household and mitigate the potential of escalating domestic violence, and offers medical treatment and psychosocial services for GBV survivors, along with women’s safe spaces.

Charles works to train International Medical Corps staff as well as community members and leaders. Having grown up in Uganda during war, he says, “I want to bring change to people who are really suffering.” He encourages the beneficiaries he meets to have hope that things will get better.

Though he acknowledges that changing the behavior that leads to violence against women takes time, during his time with the program Charles has seen significant changes within the community, particularly among women who “have come to realize that they have rights and they see they should not be experiencing violence.” He concludes happily that, during our recent campaign for 16 Days of Activism Against Gender-Based Violence, women in the PoCs and the surrounding community sang joyfully and told him, “We now know as women that we have rights and how to speak up for them.”

Addressing high rates of GBV in Afghan refugee communities in Pakistan requires a good deal of awareness raising and training, given the highly patriarchal and religious Pashtun culture, which views the topic as largely taboo. Our teams in Pakistan formed and trained gender support groups (GSGs) composed of men and women of mixed ages to tackle harmful traditional practices that exacerbate GBV—including a practice that required the family of a perpetrator of crime to pay the victim’s family in the form of a girl child. Another widespread practice of “bride payment” caused girls and women to be treated like servants in their new homes, where they face physical and psychological abuse from her husband and in-laws.

Over the past five years, in one of the refugee villages where we work, the GSGs have been successful in replacing the practice of paying a victim’s family in the form of a girl child with a fine, and with replacing high bride payments with minimal dowries. In some of the refugee villages, GSGs are helping to enroll girls in schools. Central to these efforts have been religious leaders, who hold strong influence over communities. “The GSGs have been very successful and the community is very satisfied,” Saida Inayat, our GBV Coordinator in Pakistan, reports. “They are change agents and helping the community to end violence against women and girls.” We currently are running GSGs in nine refugee villages, each trained on basic GBV concepts, on providing psychological first aid to support survivors and on how to make referrals to available services. 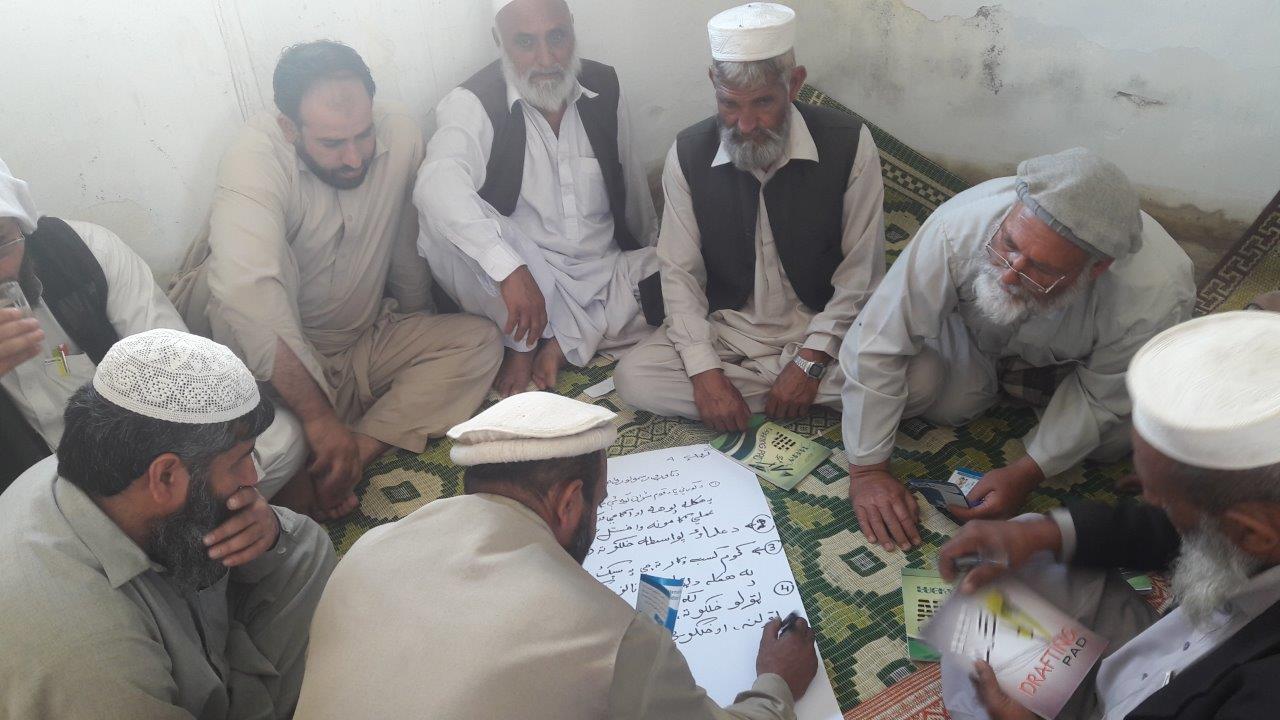 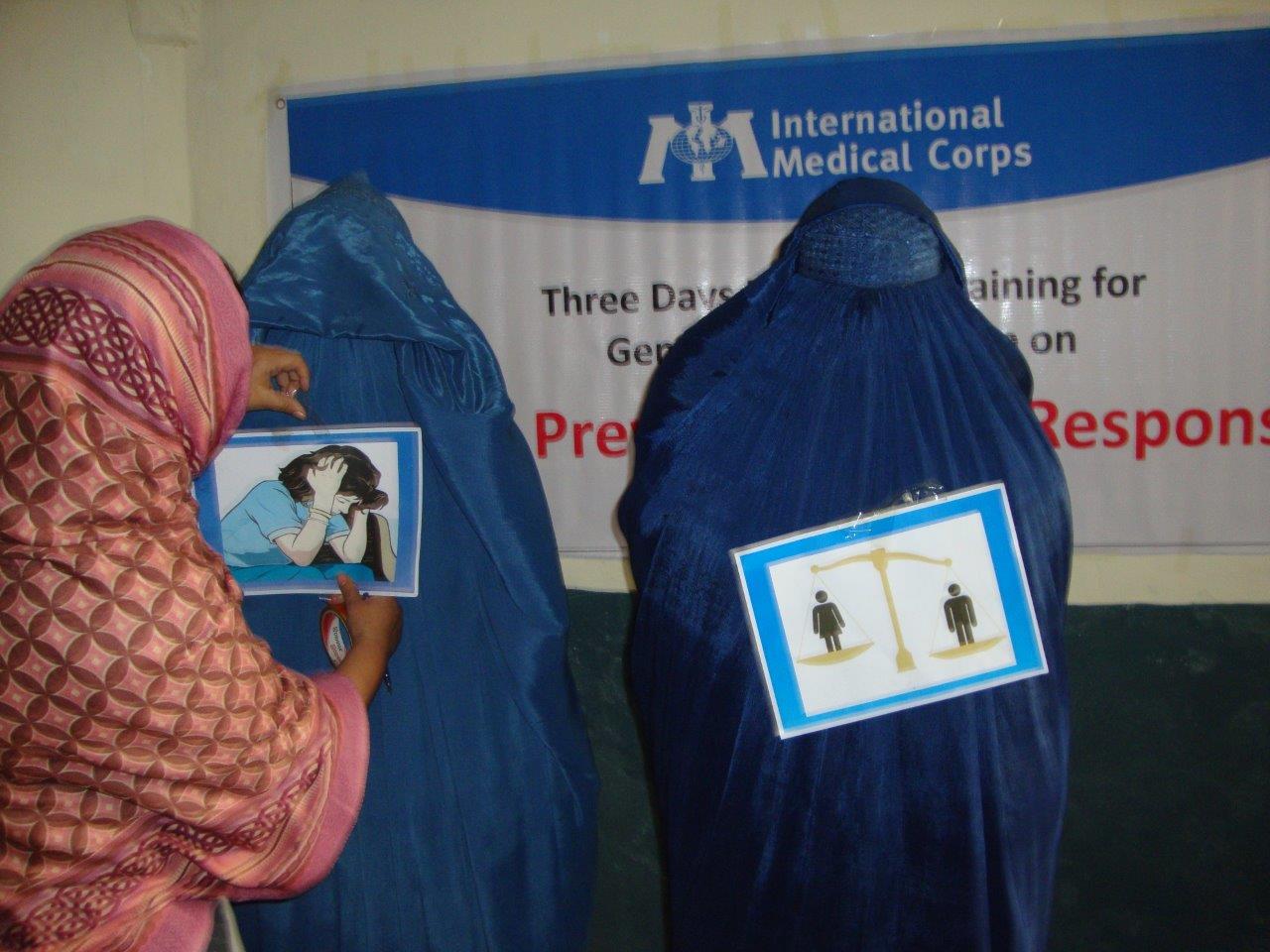 When we form GSGs, we start by raising awareness about basic human rights, then move into more nuanced sessions on GBV and harmful traditional practices. Participants help our teams to identify community entry points, such as religious or traditional leaders, and to recruit other volunteers for GSGs. Once formed and built out, GSGs can conduct awareness sessions and provide psychosocial support to GBV survivors in their own communities.

It can be challenging to raise awareness about GBV and harmful traditional practices in these environments, given men’s resistance to women’s empowerment and women’s overwhelming lack of social power. Further, women have requested higher male engagement in awareness activities, telling our teams, “We are becoming aware of our rights, but men don’t respect them.” Consequently, when we engage with men, we focus on the benefits to men of ending GBV, as well as on stories of male role models who are helping to create healthier and happier communities.

Finally, because the work can be mentally and emotionally draining for our staff and volunteers, Saida emphasizes the importance of ongoing coaching and guidance for those who provide GBV services. Such support helps remind our teams that, though the work is challenging and change takes time, their efforts are absolutely essential. We want them to know the huge difference they are making in the lives of the women and families they reach now, as well as the effect it will have on future generations.