After securing eastern Mosul in January, Iraqi Security Forces are now battling fighters from the Islamic State, also known as ISIL—The Islamic State of Iraq and the Levant—for control of the western part of the city.

Because neighborhoods on the west bank of the Tigris River are far more densely populated and tightly packed than those in the east, fighting there has sparked the highest wave of displacement since the Iraqi government-led offensive to retake the city officially began last October. More than 235,000 have fled their homes since the operations in western Mosul began on February 19th, with an average of 6,000 people a day arriving in sprawling camps for the displaced south and east of Mosul.

Mosul’s displaced—who as of the beginning of April numbered around 300,000—survived nearly three years of brutal ISIL rule only to be bombed and blasted from their homes during the battle for control of the city. Many lost loved ones or were injured in the crossfire. Some were used as human shields by ISIL fighters, forced to move further and further west as Iraqi Security Forces gained ground to the east and south. All of them are uncertain if or when they will return home, as the five-month-long fight for Iraq’s second largest city grinds on.

International Medical Corps is running health clinics in displacement camps, while also supporting eight medical facilities in east and southwest Mosul to ensure thousands of families have access to care and other essential services.

Here are four of their stories. 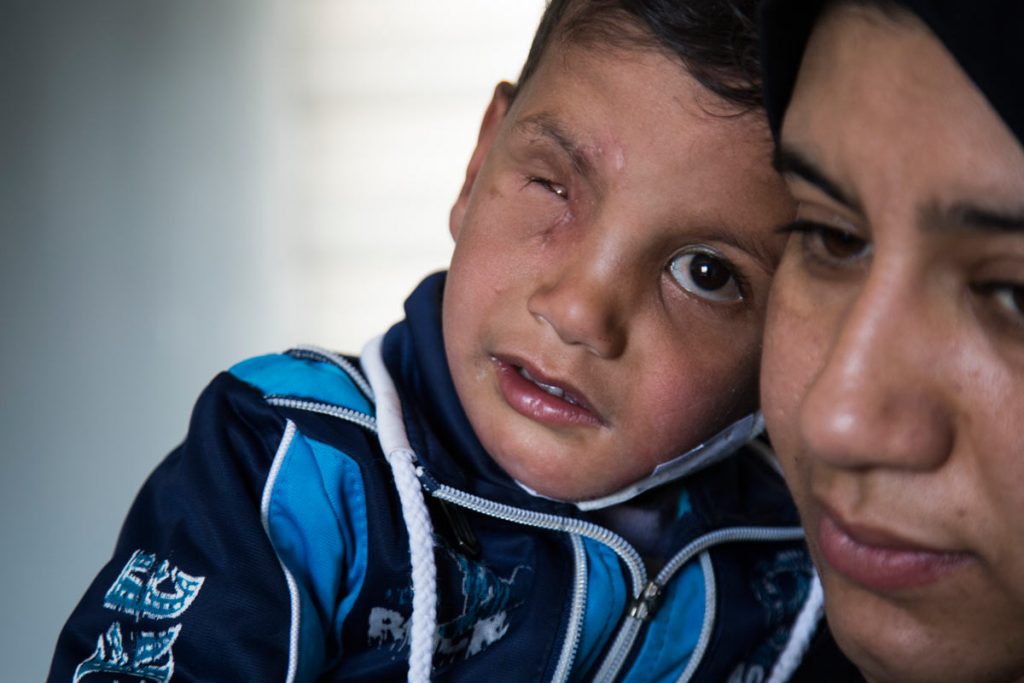 Three-year-old Ibrahim was with his family eating breakfast in their home in east Mosul last December when the mortar hit. His mother recalls he was too stunned by the blast to initially feel pain, though shrapnel had sliced into his head, beside his right eye, and cheek.

Ibrahim’s father was also hit. His right arm and left leg were severed in the blast. He died before the family could get him to the nearest clinic.

“The shrapnel stayed [in Ibrahim’s head] for four days,” recalled his mother. “I wasn’t expecting him to survive.”

When they escaped Mosul, they were met by doctors and nurses at an International Medical Corps trauma stabilization point, who provided emergency care before sending them on to Erbil for further treatment. Ibrahim’s uncle traveled with him to a hospital in Erbil, where he had three surgeries.

It was too late to save his eye.

He now lives with his mother, three siblings, and grandparents in Khazer camp, not far from where the trauma stabilization point that cared for him a few months earlier once stood. His wounds still healing, Ibrahim’s mother brings him to International Medical Corps’ clinic in the camp for regular dressing of his healing.

“We are surviving,” his mother said. “I just want to guarantee a future for my children.” 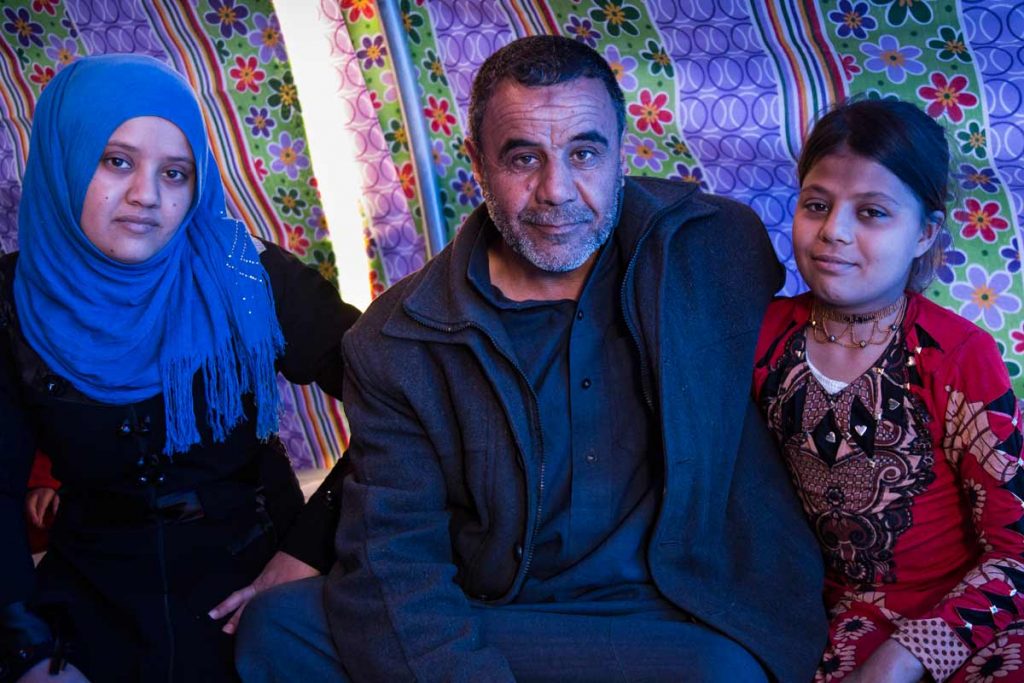 Abdi, his wife, and four children fled their home in west Mosul on January 27th. “The bombs fell down like rain,” he recalled, sitting on the floor of the tent that now serves as his home. “I was afraid for my family, for my neighbors…There was a lot of smoke from bombs and explosions.”

His uncle was too sick to run, so Abdi and other members of his family carried him in a bedsheet as they made their way south. It wasn’t until they crossed into territory firmly held by Iraqi Security Forces south of the city that he began to feel safe.

They are now settled in a dome-shaped tent in Hammam al-Alil, a growing camp roughly 15 miles south of Mosul. Thousands of people arrive at the site every day from west Mosul, where they go through a security screening before they are assigned to a camp or allowed to travel on to meet family in east Mosul and the surrounding areas.

“The camp is good,” he said. “The things we need are here. We left with only our souls. Our situation is very hard. We don’t rest. We are tired.” 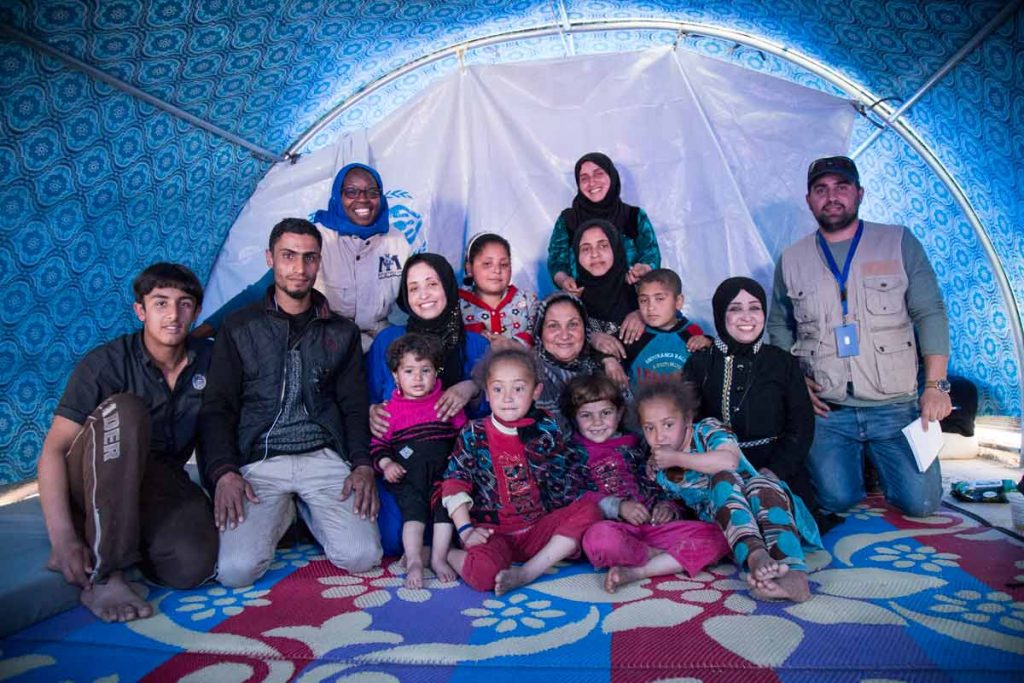 Zeena remembers a time when her family never went without. Her husband made a decent salary working in the Turkish consulate that afforded them a modest home and put food on the table. This all changed when ISIL took control of Mosul in June 2014.

“Our life was cut off,” Zeena said. “We didn’t have anything. We were hungry.”

She traveled with her daughters to a suburb of Mosul to work on a farm, where they tended to crops and baked bread to try and make ends meet.

Days turned to months, months turned to years, and the comfortable life they once knew became a distant memory.

In February 2017, the military operations to retake western Mosul began. Zeena, her husband, and daughters were trapped inside their home for eight days as fighting raged on around them. “For eight days we had nothing to eat, nothing to drink,” said Zeena. “We only had God.”

When Iraqi Security Forces gained control of the area, they set out on foot south toward Hammam al-Alil, a displacement site roughly 15 miles from Mosul. “When we arrived, we rested,” she said. “The services are good here.”

While Zeena and her family feel safer in the camp, she remains concerned what will come next for her and her family. She would like to return to Mosul when the war stops, but worries about how they will make ends meet with work opportunities limited and the costs of rebuilding their lives makes that dream seem daunting.

She is also afraid for families still trapped inside Mosul.

“We are free,” she said. “We can eat and drink. There are large families in Mosul facing a tough situation. Children don’t have milk. The biscuits disappeared. We need international support for people still under daesh (ISIL) control. The support needs to come quickly because children will die of hunger.” 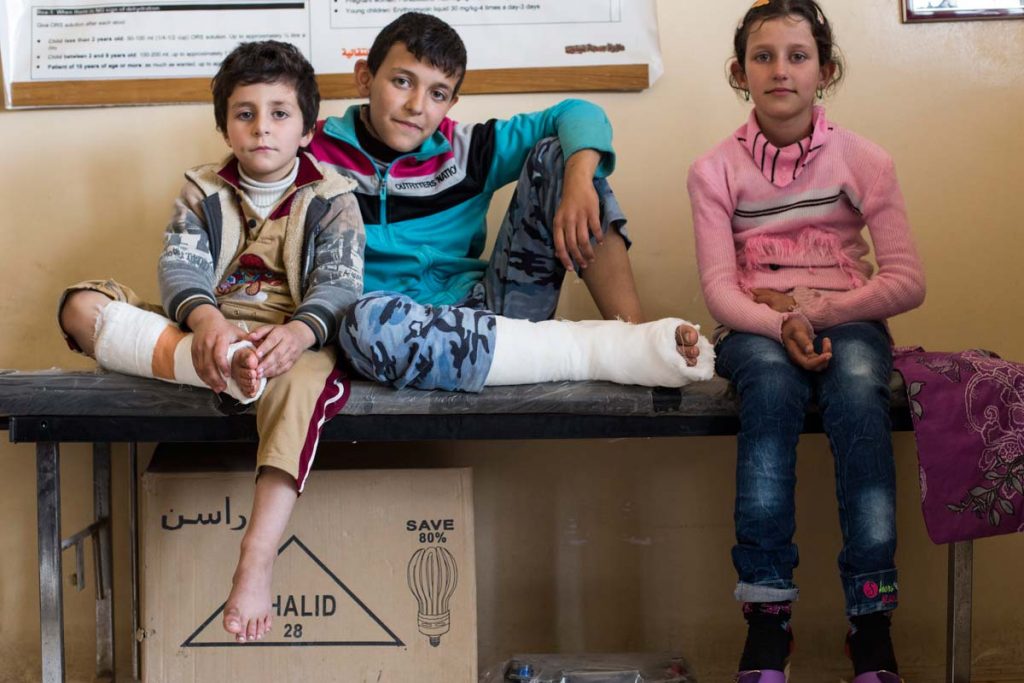 Ahmed, six, Mohmed, 11, and Zahra, nine, were just outside their home in west Mosul when three mortars crashed down around them.

“I was standing in the garden with my brother and sister when the mortar hit,” Mohmed said. “I felt my leg become warm and wet. I then saw my brother crying and my sister running to get inside the house.”

With fighting surrounding them and no clinics within reach, their father rushed them to a nurse who lived nearby. “We had no other choice but to get first aid from the nurse,” said their father Wissam Thanoon. “We ran to her while bombs and shells were falling. She dressed the injuries as best she could.”

They then had to wait, hiding in their home with four other families, eating only one meal a day of rice. Six days passed before they could leave and work their way south, eventually reaching the eastern Mosul neighborhood of Qahira, where they settled with extended family. Nine days after the children were hit in the mortar blast, they visited a nearby clinic, which is receiving support from International Medical Corps. There they had their wounds assessed and dressed. White casts now cover Mohmed’s and Ahmed’s right feet, which were fractured in the blast. It is the first time the family has had access to regular health care services since ISIL took control of the city in 2014.

Wissam feels the situation in the eastern half of the city is far safer for his children, with markets and schools opening, though he is uncertain what he will do for work.

When asked if the family will return home, Wissam replied: “In west Mosul, all we have is a damaged building.”