I had often heard it said that the road to heaven is narrow, rocky, steep and winding. If this is the case, then it shares similar characteristics with the road leading from Kawap to Parikati in Samburu, Northern Kenya. This road is treacherous, even by Kenyan standards. Where else can you take four hours to drive 10 miles in an SUV?

Parikati itself is not an ideal tourist destination. Due to its low altitude, it is searing hot day and night and receives less than 100 millimeters of rain in a very wet year (which can all fall in 30 minutes), making it among the driest places in the planet.

Archaeologists claim that Parikati lies on a dry lake bed that was part of Lake Lokipi, which originally joined with Lake Turkana. Over many decades, the sun’s rays have evaporated the water and converted the glorious lake into a saline pond in the desert. As a testimony to the resilience of mankind, there is a community of Turkana nomads that inhabits this hostile terrain.

In March of 2011, International Medical Corps sent me to Parikati to work with a local basic school to install a rainwater-harvesting roof structure. Prior to going there, we had to organize to transport construction material to the site. This presented a big problem. It was very difficult to get any transporters willing to go to the site. After asking around Baragoi town, we were referred to a certain trader who, we were informed, was “mad” enough to transport material to the site. Needless to say, he was demanding a small fortune for the task. He lamented, “I will have to change my tires and suspension when I return from Parikati.” At the time, I thought he was exaggerating and so I successfully persuaded him to give us a negligible discount. Looking at the rusty old junk of a truck he had, I was not sure it could move, let alone carry supplies to Parikati. However, since he was willing to go, we struck a deal; he packed and left with the material.

There are two routes to the site; one is about 50 miles long and the shorter one is about 10 miles. Our transporter took the longer route. Our team—comprised of one mason, a technician from the government water ministry, the driver and I—set off early the next morning on the shorter route. Before we left, the driver informed us that he’d been told that this route has not been in use for a while. I did not let that discourage me. Being the team leader, I instructed him take the shorter route.

The journey from Kawap to Parikati gave us an opportunity to witness firsthand the power of storm water. A short intense storm flood the previous week had washed large boulders off certain sections of the trail and deposited them on other sections of the trail. We had to crawl for hours manually repairing the road while the driver torturously maneuvered the vehicle behind us. It was such an agonizing task that the next day muscles ached that I did not even know I had on my body. The entire 10 mile trail runs over boulders and rubble that shook the SUV so much, making it impossible to travel over 3 miles/hour. At one point, some herdsmen overtook us driving their cattle. 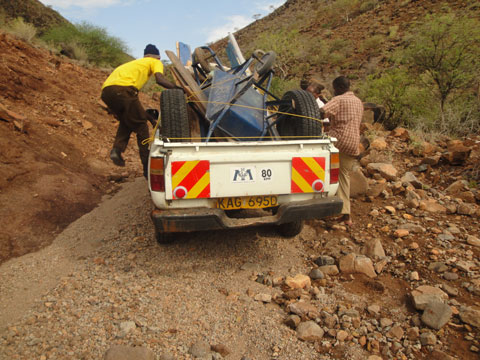 To cut a long story short, we received a very friendly welcome from the school committee, which was expecting us. After discussing and agreeing on the roles and responsibilities of the community, we were treated to some tea and chapatti from a local makeshift restaurant; this friendliness made up for the deficiency in culinary skills. However, we had to cut our meal short when a local elder pointed out that some rain clouds had gathered in the direction that we intended to return. We hastily left and returned to Kawap.

When we returned to Parikati a week later, the installation had not only been completed, it had also rained on the previous day. The water tank was full and the pupils were very happy. “It is a blessing from God,” said an elder. I was uncertain whether he was referring to the rain or the project. Maybe both, I thought to myself. I love this job.