Yasmine has always been drawn to all things beautiful. As a young girl, she was able to see beauty in places where others did not. She did not know then this was a gift that would help Yasmine in her adult life when she would be faced with her greatest challenge: fleeing civil war in Syria and living as a refugee in a camp, far away from the only family, livelihood and culture she had ever known.

While living in Syria, Yasmine earned her college degree in art and became an art teacher. She loved teaching, painting, drawing and ceramics to young children. When the violence from civil war became too threatening, Yasmine was forced to flee Syria with her husband and young son. After a long journey, they ended up in Za’atari refugee camp in Jordan. After a month in the camp, trying to make sense of her new life, Yasmine found International Medical Corps and today works as a volunteer art teacher in one of our youth friendly spaces. She demonstrates how to work with clay, draw murals and paint. Yasmine says, “Many of the young people who come here are distressed and very much affected by the conflict in Syria. The center helps them engage in activities, learn new skills and socialize with others.” Yasmine added, “International Medical Corps is allowing me to do what I love. Most other women in the camp are engaged in house work during the day but I feel like I can continue my career and gain more experience.” 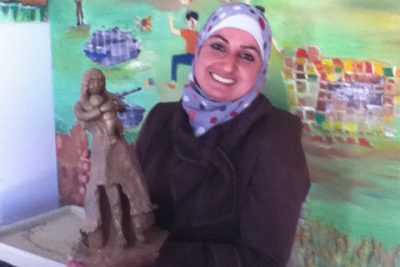 A global, humanitarian agency dedicated to saving lives and relieving suffering, International Medical Corps is responding to the Syrian refugee crisis in Jordan with mental health and psychosocial programs, a critical need that is often overlooked during an emergency, especially among children. International Medical Corps’ youth friendly spaces in Za’atari refugee camp provide a safe space for adolescents to participate in group activities, seek individual support, and connect with other young people. For many adolescents who have experienced or witnessed distressing events or violence, having a safe place to play, learn and explore is crucial for their future and wellbeing. The spaces are large, colorful and cool. There is an area for sports and an area for crafts. All around, youth can enjoy themselves while they create and explore.

Populations affected by conflict and crises not only face stressful experiences such as violence and loss, but also often have to adapt to the challenges of new environments such as transitional and camp facilities. Distressing experiences and fragmented or insufficient services can lead to unaddressed mental health and psychosocial issues, impacting the welfare and functioning of individuals and families. According to the World Health Organization, in emergencies the percentage of the population experiencing common mental disorders doubles (from 10% to about 20%), while those with pre-existing and severe mental illnesses remain especially vulnerable and often have no access to care.

The long-enduring civil war in Syria has turned into one of the largest humanitarian crises in history. 9.3 million people are in need of humanitarian assistance in Syria and 2.8 million are living as refugees in neighboring countries. The U.N. predicts that Jordan, Lebanon, Iraq and Turkey will see over 4 million refugees by the end of 2014. This is a social and economic emergency affecting the entire region.

Za’atari refugee camp in northern Jordan first opened in mid-2012 to host Syrian refugees. What used to be a barren, arid desert two years prior is now a sprawling city of tents and portable shelters housing 100,000 Syrians who have all escaped the horrors in their homeland. Za’atari is now considered Jordan’s fourth-largest city and is equipped with a commercial district nicknamed the “Champs Elysees”, electricity, and international organizations providing critical services. The country of Jordan now hosts over half a million Syrian refugees in total.

Yasmine isn’t the only one who is helping out in and benefiting from International Medical Corps’ mental health program. Hassan is a young man who has found great opportunity in the youth friendly spaces. While Hassan was a shy kid who spent most of his time reading books alone in his room during his childhood in Syria, he has come out of his shell living in Za’atari thanks to the program. When he fled his homeland and ended up in a refugee camp, he saw opportunity where everyone else saw nothing but a desert. He recognized this as his chance to make a difference in his new community. He says, “Reading alone is not useful. One needs to practice.”

Hassan started to look for ways to participate in the lives of his fellow refugees the moment he arrived in Za’atari camp, determined to make the most out this situation of which he had no control. He recognized that many young people had untapped skills and energy and he felt a calling to make a difference in their lives and his own. Hassan now volunteers for International Medical Corps in a youth friendly space where he holds discussions with groups of young people about important issues that affect their lives in the camp such as safety, good communication and the importance of attending school. When any young person feels the need to talk about the atrocities they have faced as victims of a civil war, Hassan is there to listen and encourage them. Hassan also leads youth groups in gardening activities around the camp to provide families with better nutrition and give them a sense of pride. “Youth now stand in line when they enter and exit our space and everyone here knows me,” he said. “I’m proud of myself” Hassan explained, “Here, I can do something useful.” 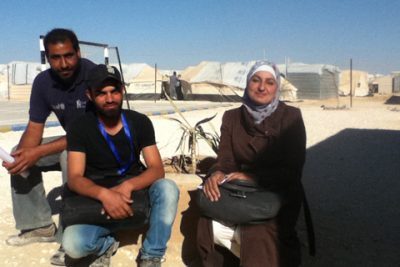 Ali is another refugee that has made the most of his dire circumstances. From a poor family, Ali often could not afford basic needs or adequate clothing while living in Syria. He even had to drop out of school and work to support his family. Despite his own poverty, he recognized the greater need of the large influx of Iraqi and Lebanese refugees from the civil wars waging in these neighboring countries.  With his friends, he volunteered giving out food and clothing to the refugees living in his community. He never expected to become a refugee himself. Ali arrived in Za’atari camp as a refugee with feelings of low self-esteem and saw no opportunity for himself in such a desolate place, until he found International Medical Crops’ youth friendly spaces. As a volunteer, Ali works with adolescents on gardening and other construction projects. In his short time in the camp, he already constructed a soccer field and is planning to build a small stage for a theater program for children. Ali says, “Working with teenagers can be daunting and challenging. But they have accepted me as a friend and brother. I’m feeling much better now and I want them to feel better, too.”