Refugees from crisis-affected countries arrive each day by the hundreds on the east Aegean island of Leros and are taken by Greek authorities to a detention center, where they must register and spend the night. The conditions are austere. They sleep outside on thin bed mats. Families cluster together to stay warm. Most appear thankful to have made it safely to land and to receive a simple but warm meal from gracious volunteers. But they are tired, shaken and disoriented after their treacherous journey by boat and many are in extremely poor health.

Once registered, those who need medical attention are directed to a mobile medical team stationed just outside the gates of the detention center, operated by International Medical Corps and its partner Praksis.

On this late October day, there are many new arrivals and there is a rush for help from the team’s nurturing doctor, nurses, social worker, coordinator and translator. A crowd forms outside their well-equipped and supplied medical van and there is a steady stream of patients for the next 10 hours. 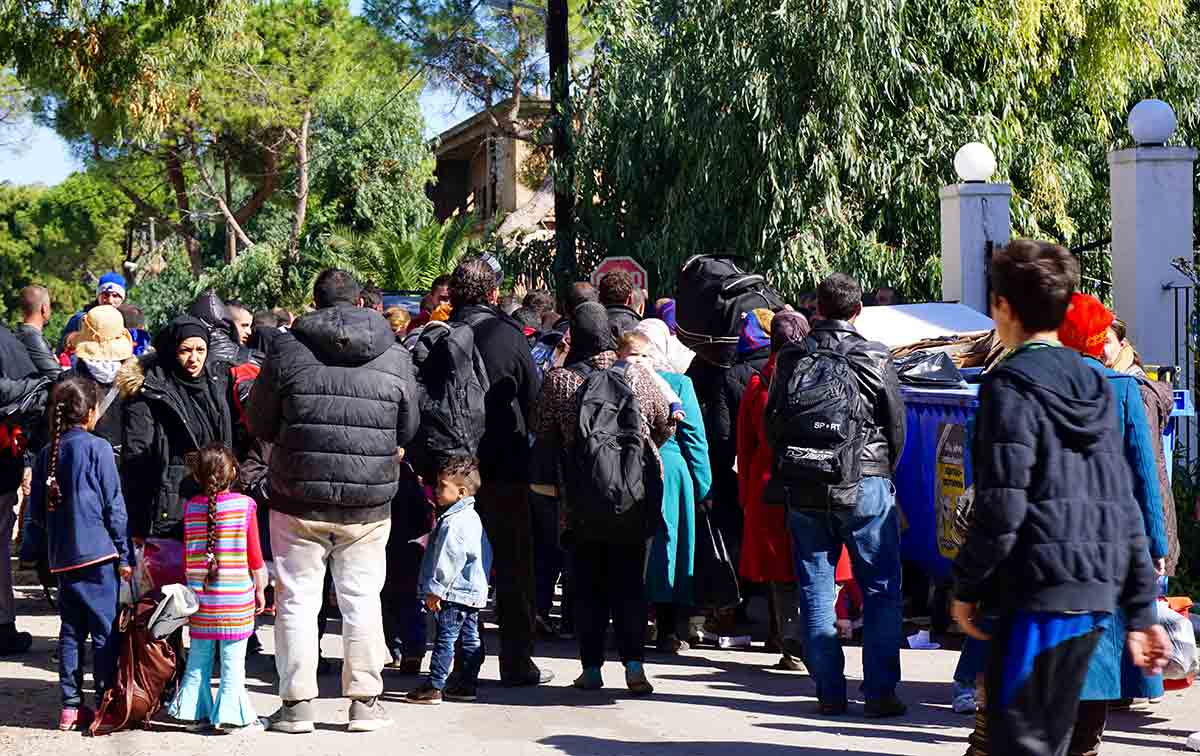 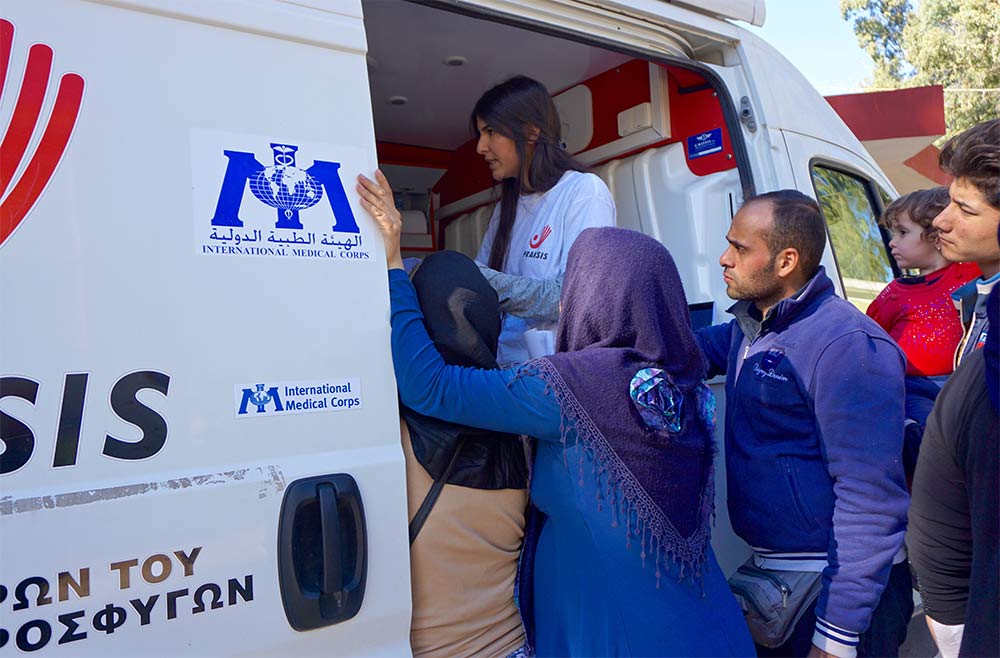 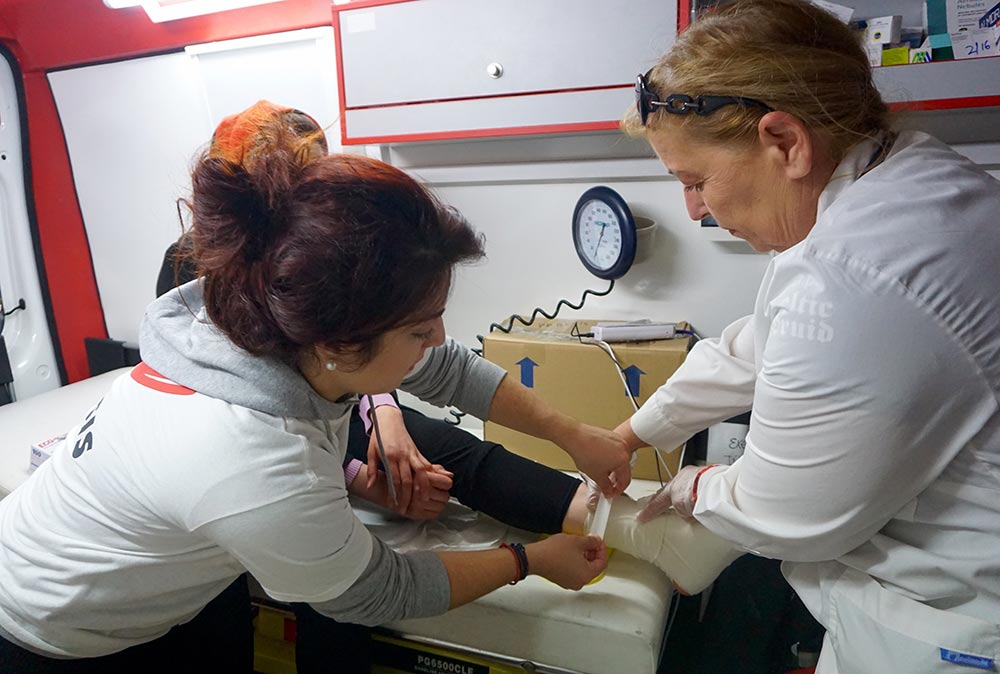 Today the team cares for a Syrian woman with a bloody and badly swollen face who fell on rocks while disembarking from her boat, and a young woman from Afghanistan who twisted her ankle while coming ashore on the nearby island of Farmakonisi, where refugees first land before being taken to Leros by Greek authorities.

They tend to many pregnant women – from Yemen, Iraq, Syria and Afghanistan–some feeling pain and discomfort, and others filled with anxiety about the impact of the trip on their health.

They examine and dispense medicine for multitudes of coughing and sneezing children, like this 10-year-old Iraqi girl who vividly describes her symptoms to nurse Despoina Botanaki (upper left), social worker Alexandra Moustaki-Zei, and Dr. Anna Sotiropoulou (right), with a bit of help from her dad who brought her in.

The team also comes to the aid of refugees with skin rashes, high blood pressure, and diabetes and treats many patients with infections from new and old wounds and injuries. 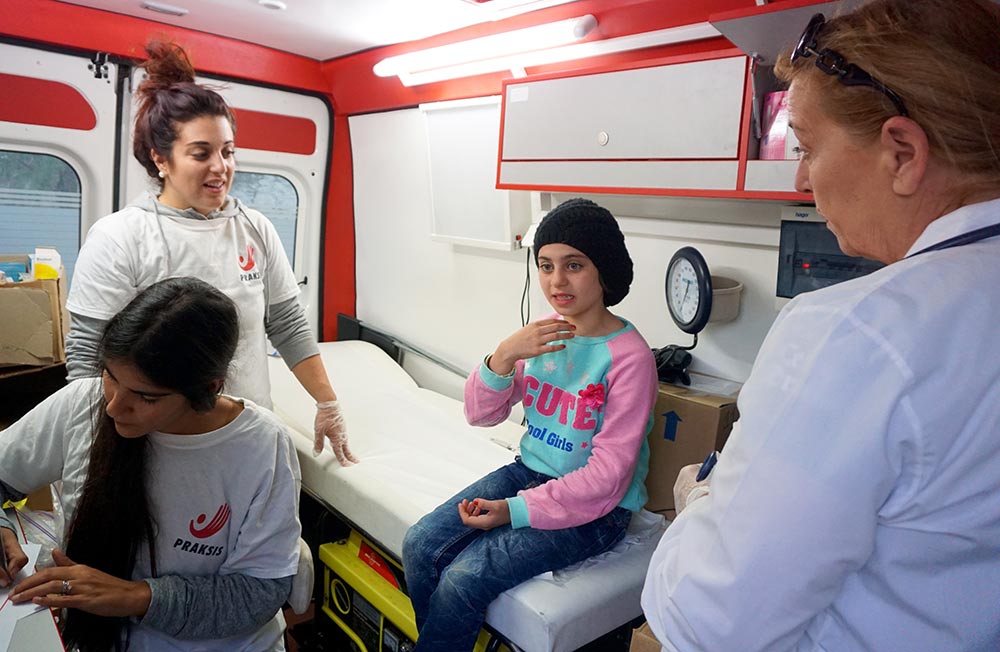 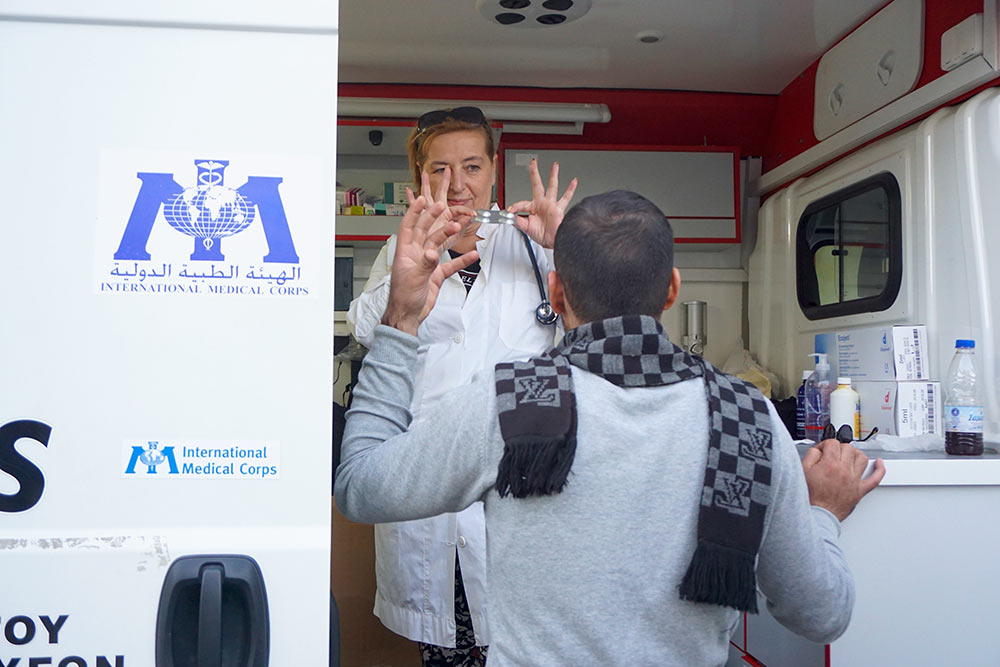 “We had one patient today, a young Syrian man, who has lost feeling in one arm and one leg,” Dr. Sotiropoulou says. “He was shot many times and told me he had surgery four months ago, but it was no good. He’s in a lot of pain, and now he also suffers from a swollen and infected foot from all the walking. I gave him antibiotics and pain medication and that will help. But I told him he must see a doctor as soon as he gets to Germany.”

The mobile medical team cared for 63 patients on this day, and provided them with a bag full of hygiene items, including soap, small towels, shower gel, shampoo, toothpaste and toothbrushes. International Medical Corps and Praksis are establishing more teams like this one, to cover the underserved and inundated islands of Kos and Samos, in addition to Leros.