When you spend most of your life serving others, how do you measure your impact? In a field of work that is extreme and chaotic, where you are constantly witnessing unfathomable human suffering, how do you cling to hope? More than three decades after he started working with International Medical Corps, Stephen Tomlin is haunted by the many people whose lives were devasted by war and disaster. But his life is a tapestry interwoven with the hundreds of thousands, maybe millions, of people whose lives were changed for the better because of him.

Tomlin’s International Medical Corps story started in 1989. He was an out-of-work Brit living in Central America with his wife and four children, having just completed a job teaching English to kids in Honduras. A new-ish NGO run by a young CEO, Nancy Aossey, was asked by the US Agency for International Development to do what other organizations were unable to do: provide assistance within the “humanitarian nightmare” that was Nicaragua. Tomlin was offered a job as a logistician.

For two years, International Medical Corps worked in the dense rainforest of neighboring Honduras. Our mobile medical teams traveled mostly by helicopter, providing reconstructive surgery, training and healthcare for those displaced by the conflict in Nicaragua. Tomlin recalls first becoming aware of the impact of this work when he saw how people’s lives were transformed. He remembers the dentist who filled the teeth of an old woman who later commented that this was the first time she was able to chew food in months. He remembers the ophthalmologist who removed cataracts from villagers’ eyes, and the grandmother who was able to see her grandchildren for the first time. “Those are the kind of moments you remember,” he says with a smile. 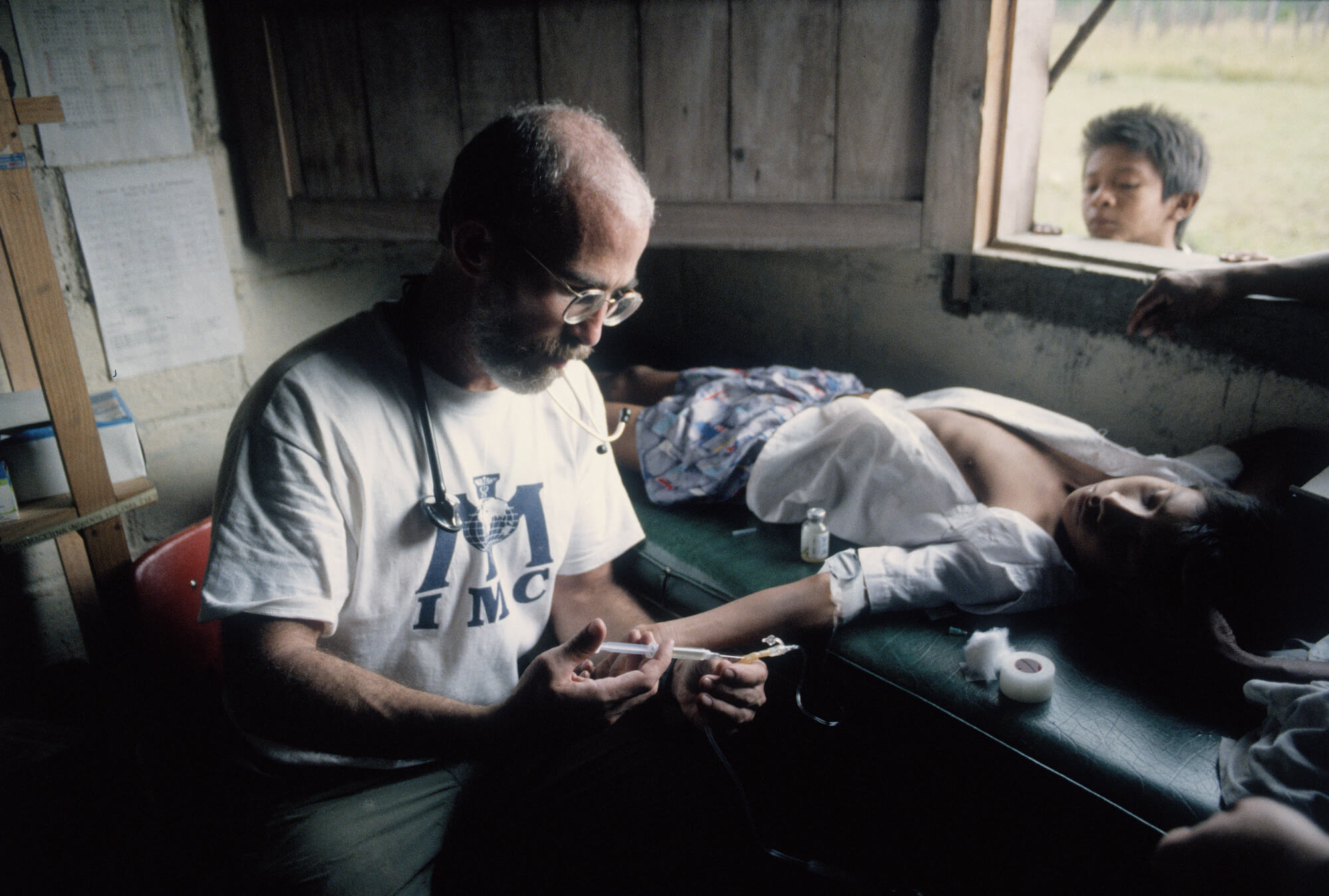 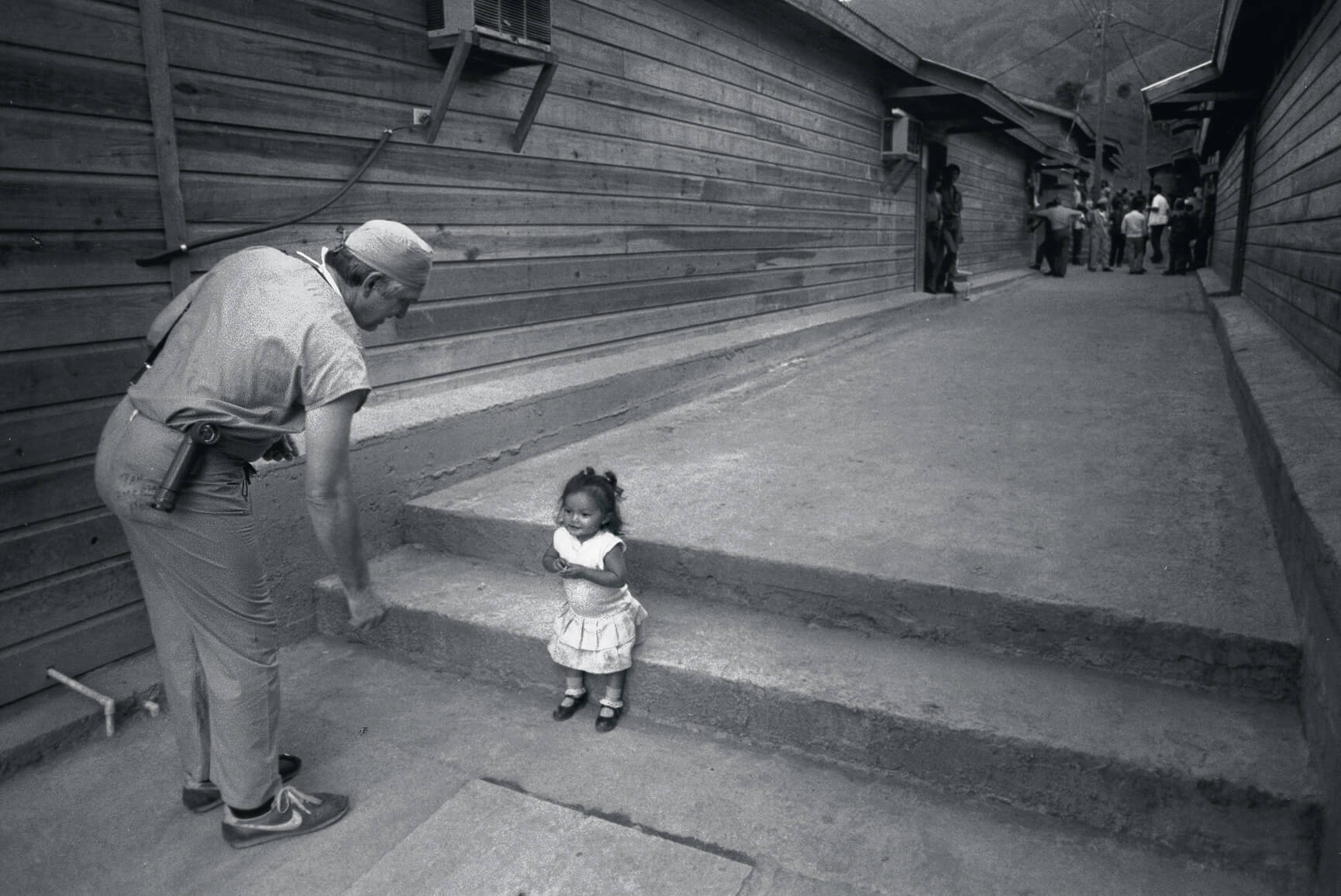 But lest anyone forget how surreal and extreme the world of humanitarian relief can be, Tomlin shares another story about his time in Honduras. That same ophthalmologist who removed the grandmother’s cataracts was later piloting the team helicopter when a bird flew through the windshield and took out his eye. He somehow managed to land in the river, where another surgeon on the flight put his eye back in and bandaged it up. A year later, on the day that the healed ophthalmologist passed his medical exam and once again earned his pilot’s license, the whole International Medical Corps team celebrated by holding a big party. Tomlin smiles as he recalls this story, adding that “It’s the people I worked with and the people I worked for” that he loved most about his job.

The Humble Man in a Warzone

In early 1991, after two challenging but successful years in the field, Tomlin helped wrap up the Nicaragua program just as a civil was heating up in Somalia. Aossey was hearing stories of large numbers of civilian casualties with no medical care whatsoever, in a region where all of the hospitals and clinics had been looted and most of the doctors and nurses had fled. No other NGOs wanted to go there, so Aossey once again raised her hand to volunteer—and she called Tomlin to join her. “I think I was naïve and stupid,” Tomlin jokes when asked why he would willingly go to work in a warzone. “I had no job and four mouths to help feed—and I was just dying to get out of the house!” Full of quips like these, Tomlin is quick to shrug off the daring and courageous things he did to help others.

“Nancy asked me to do something,” he says, “so therefore it must have been very doable. And so I went to Somalia.” There, he met up with “a very fine group” of people already working there for International Medical Corps, and traveled to Mogadishu—the heart of the conflict between warring clan lords—to conduct an assessment. They discovered that although there was a large municipal hospital still standing, no medical services were being delivered. “There were people sleeping on the streets, and there was nothing to buy, anywhere,” remembers Tomlin.

With brutal fighting raging across Somalia, Tomlin relocated his entire family from Central America to Nairobi, Kenya, and traveled regularly into Mogadishu to help International Medical Corps set up surgical capacity at Digfar Hospital, working alongside two orthopedic surgeons and eight ER nurses. Tomlin describes his time as a young humanitarian learning about the inhumanity of war in the midst of violence as “very scary,” and—with a faraway look that clouds his eyes—alludes to “a lot of trauma.” For example, he recounts the time when the local team was taking Aossey around the country to visit program sites—and, while at the airport loading a plane with medical supplies, their charismatic Somali colleague and driver, Jackson, was shot and killed by a member of a rival clan right in front of them.

“I’ve never seen suffering to the extent that I saw in Somalia,” says Tomlin. He remembers seeing people dying in the streets and remembers how overwhelming the hospital was, overflowing with casualties of war. At the same time, he says, “I never felt hopeless because we were always able to make a difference.” The causalities that the International Medical Corps team stabilized in the ER—where we also were training Somali surgeons—would have otherwise undoubtedly died, so Tomlin says that he and his colleagues were able to go home every night and say, “Today we saved X number of lives.” At the height of operations, they were taking in 80 to 90 casualties a day and performing 10 to 15 surgeries. “In a nutrition program, the impact cannot be seen for a month or two,” says Tomlin, “But in a surgical program, you see the impact you’re making very, very quickly.”

Having seen hundreds of NGOs on the ground over the years, International Medical Corps stands apart because “we can get it done,” says Tomlin. “In Somalia, for example, there were hardly any NGOs operational in Mogadishu at the time that we were there, and no one really knew how to operate.” Logistics are key to the success of operations like this. “How do you securely get staff and supplies into a warzone?” asks Tomlin. “We’ve always just said at International Medical Corps, ‘We can get it done.’”

To get staff into Mogadishu, the team had to hire planes that normally would be used to deliver khat, a local drug popular in Somalia, and included medical supplies in cargos that also carried food. Once they got the supplies in, they worked with locals to rehabilitate the hospital.

The Man of Service

Stephen spent two years in Somalia, then went to work on International Medical Corps’ Afghanistan program, which had been training mid-level medical professionals since Dr. Bob Simon founded the organization in 1984 to fill massive gaps left in the healthcare system during the Soviet occupation. By the time Tomlin arrived, there were hundreds of trainees spread across the country serving their own communities—impressing upon him the staggering impact of International Medical Corps’ dedication to training, a model that he would later help replicate in other countries over decades of work. One year later, Stephen went back to Africa to start and lead programs in Rwanda during the genocide, then worked in conflict zones in Burundi and South Sudan. 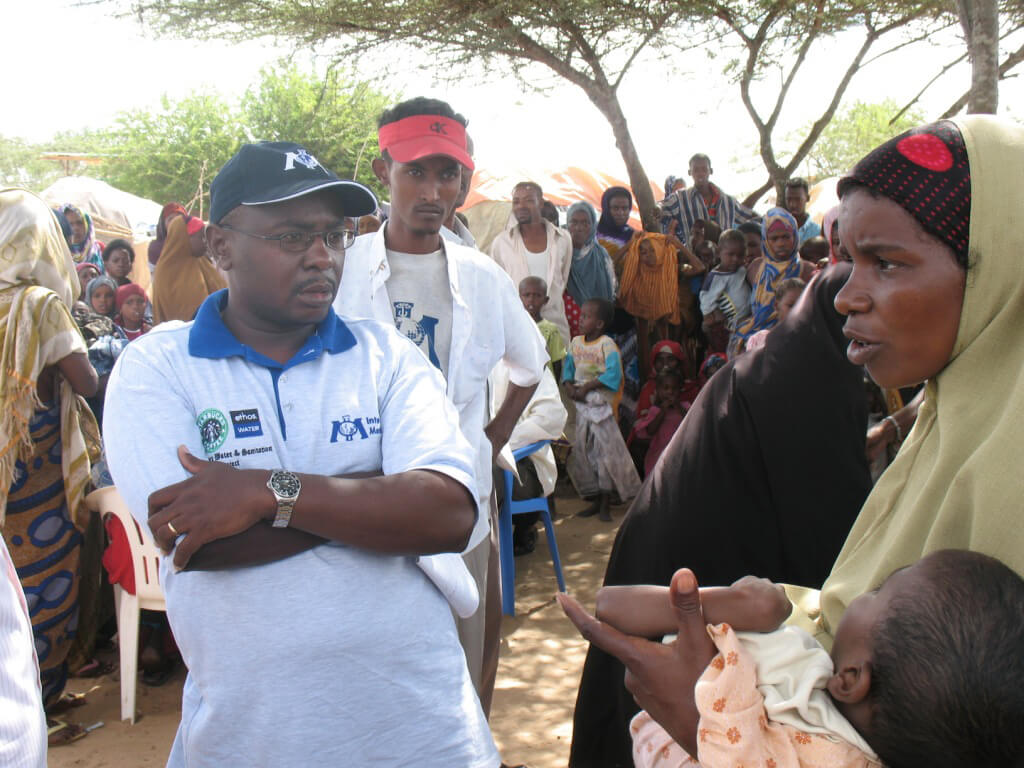 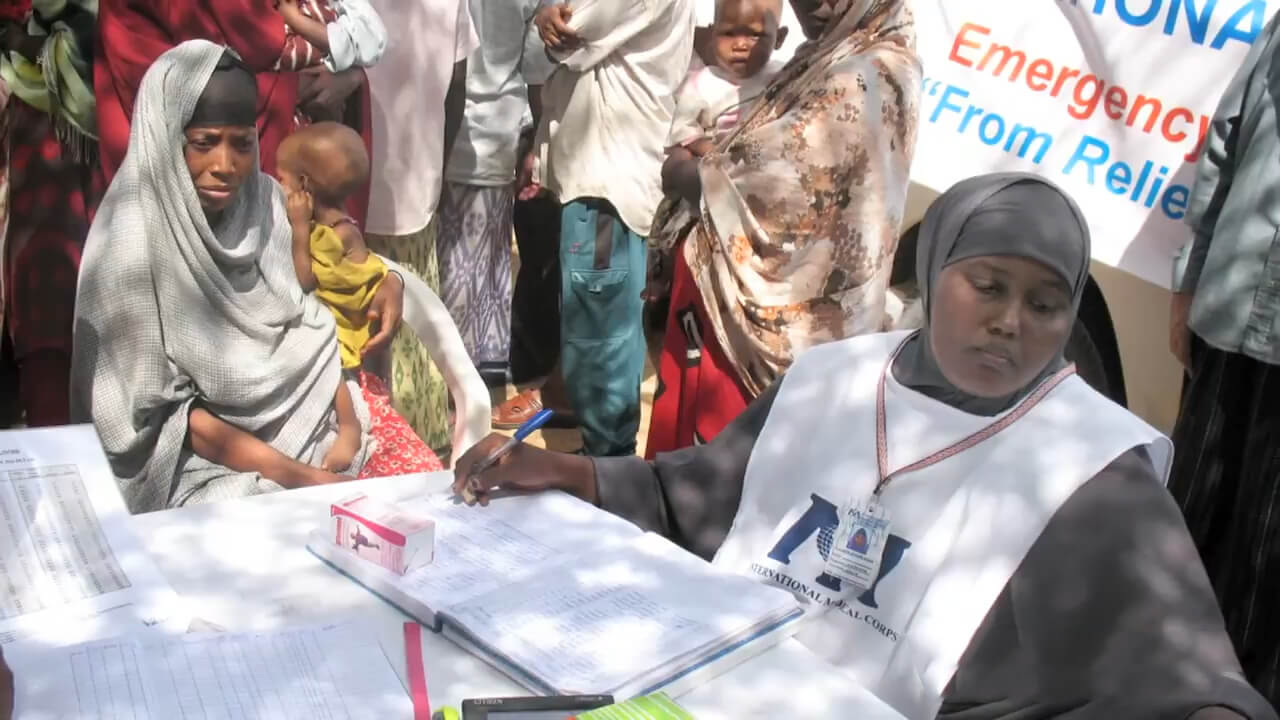 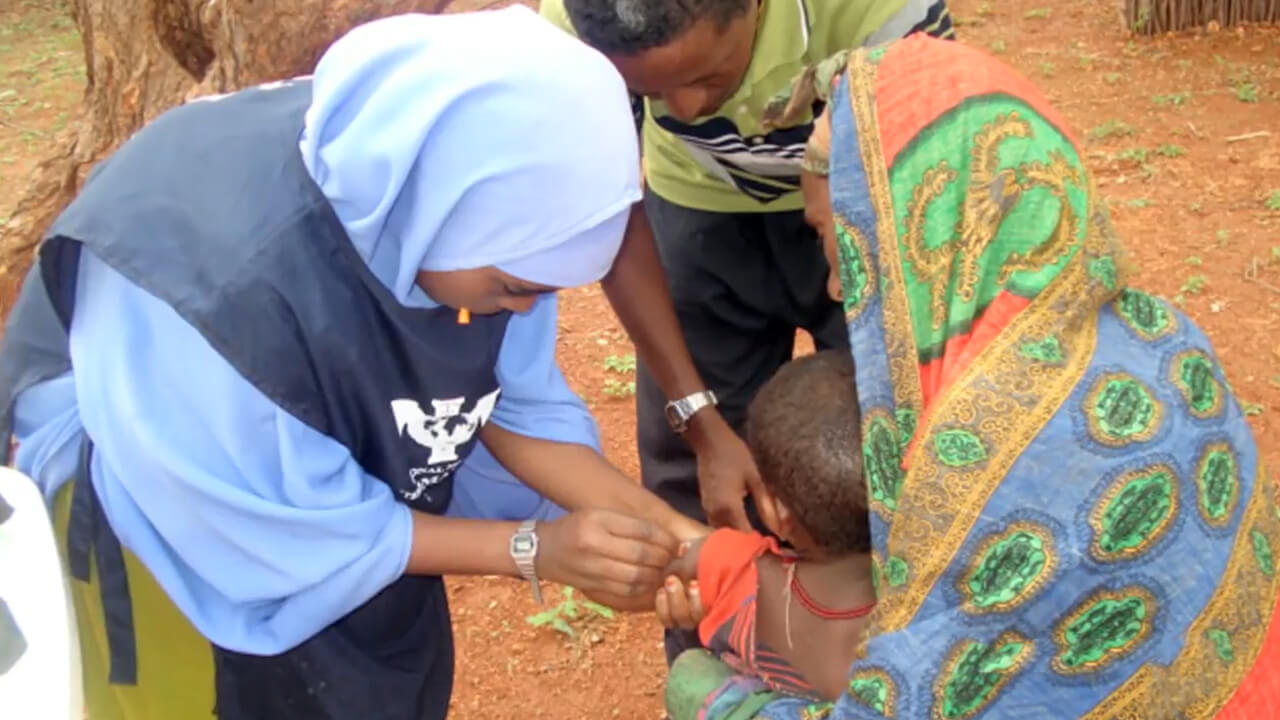 Says Tomlin, “I stayed with International Medical Corps for so long because it created a space for me to make a difference. I didn’t always feel it at the time. But looking back, having worked here for 30 years, I see that this was very true. When I look at the programs that have rolled in over the years—the ways in which those programs have been designed and developed, and become more targeted and sophisticated in reaching vulnerable people—I see that we’ve made a big difference.”

Having been part of our smaller earlier missions, Tomlin has been particularly impressed by the geographical expansion of the organization, as well as the technical evolution of its training programs. Because International Medical Corps is an organization that delivers healthcare through training, he says it’s gratifying to know that “there are local practitioners all over the world today delivering services for their communities with skills that they have developed through International Medical Corps.” 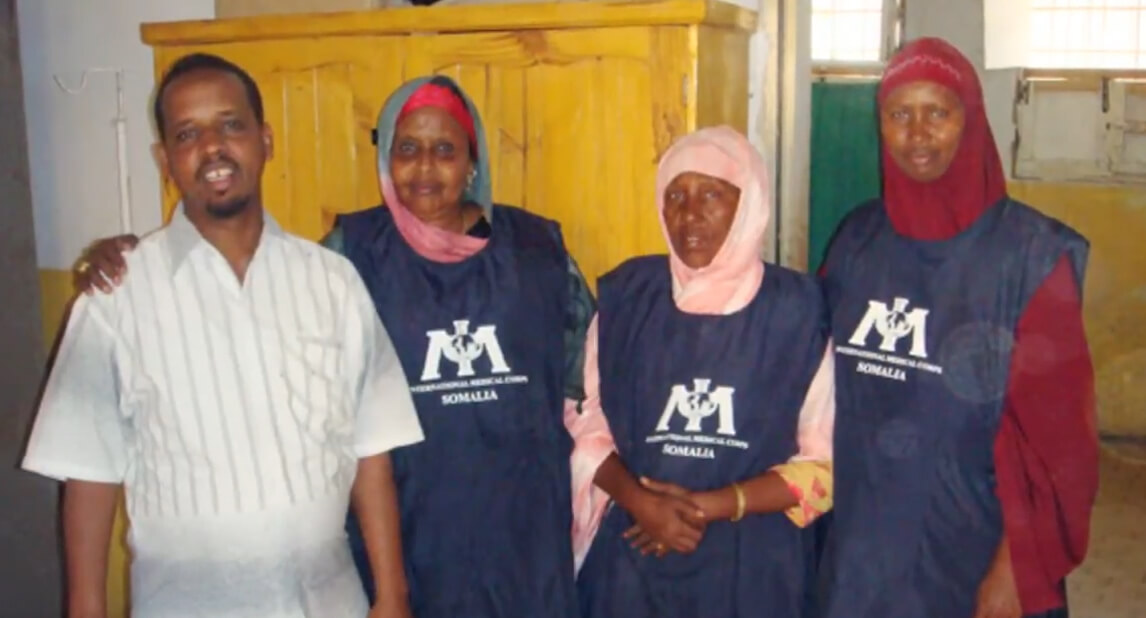 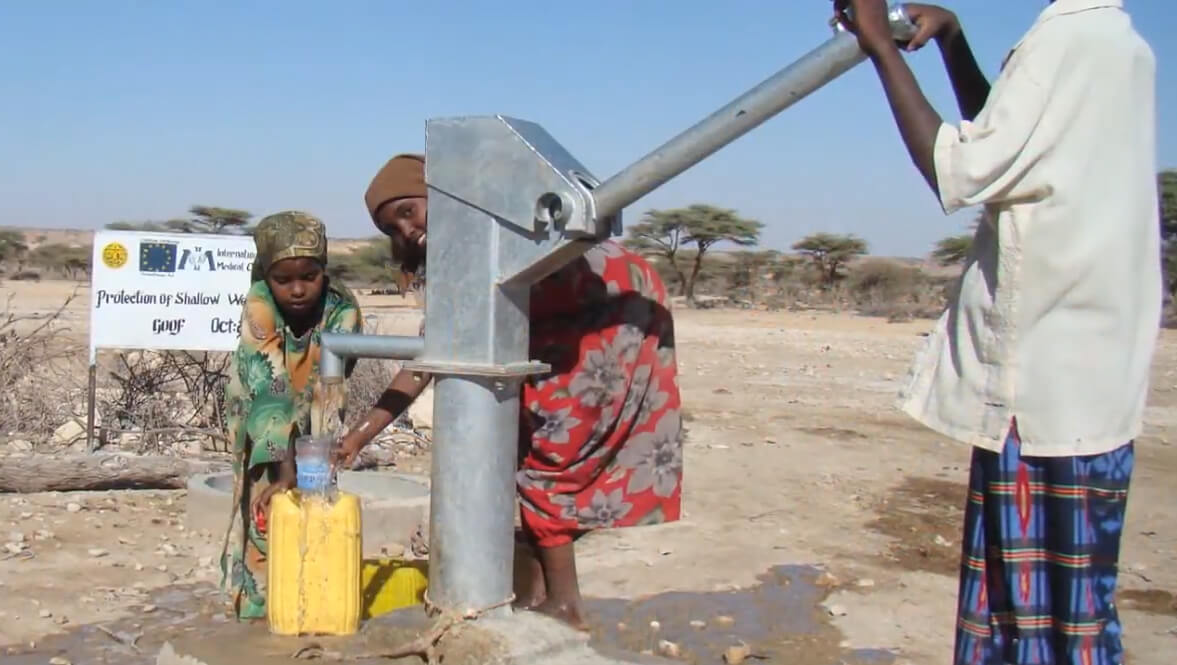 He points to South Sudan as an example. When he first went there in the 1990s, he never once encountered a midwife. He remembers meeting the medical officer from the district hospital in a town brewery, and learning that he was getting paid one yard of cotton and a pound of salt per month for his services. Today, there are people providing medical services all over the country who have been trained by International Medical Corps—including the 432 midwives and 159 nurses we’ve trained since 2012.

The Legacy of a Man

Today, looking back on his career from the vantage point of retirement, Tomlin says he can’t answer the question of whether he has fulfilled his life mission. But after a heart surgery last year that left him “very reflective,” he has started to process the impact that he has made over his lifetime. “Over the years, with International Medical Corps, I’ve made a big difference—and that difference has been of service to thousands of people,” says Tomlin.

As for his legacy, he says he’s asked himself that question many times over the years—and he still doesn’t know how to articulate it. But he does know one thing: there is a surgeon from a minority clan in Somalia who was a third-year medical student when the civil war broke out in the early 1990s. This medical student became an assistant to the American volunteer surgeons who would rotate through the hospital run by International Medical Corps, and he used the training he received there to later become an accomplished surgeon himself. A couple of years ago, Tomlin heard that the doctor was still in Somalia, working in a district hospital, and the only surgeon in the whole region—making a big difference himself.

“And I mean, that’s—just symbolically speaking…” Tomlin breaks out into a wide grin as he searches for the words to summarize something that he helped start 30 years ago. “That’s just great.”