Editor’s Note: International Medical Corps’ Yemen Blog presents a rare view of life on the ground in Yemen, chronicled by our first responders as they battle one of the world’s worst humanitarian disasters—one fueled by poverty, hunger, disease and a seemingly endless war, now in its seventh year.

The entry below is written by Dr. Nebras Khaled, our Health Program Manager in northern Yemen. She is based in Yemen’s capital, Sana’a, where she grew up, earned her medical degree and lived much of her life before joining International Medical Corps in 2014 as a mobile medical team leader. Her current responsibilities include helping to implement our healthcare, nutrition, and water, sanitation and hygiene (WASH) programs in three districts of Sana’a governorate that have been hit especially hard by the effects of war, crippling food shortages and high rates of disease.

As I write this, I feel heartsick from what I see happening to my country. It seems as if every time I see a glimmer of hope for the future, a darkness descends to smother it, robbing us of any optimism for the future that we can hang onto to help us keep going. I wish that my birthday—an occasion that always brings my family together—would come and the black cloud that covers our world would disappear. I wish the war would stop and that we could see an end to the COVID-19 pandemic, but both remain.

From the start, the summer was difficult. August was especially hard to bear, as bureaucratic hold-ups blocked the formal extension of International Medical Corps’ humanitarian relief activities in northern Yemen. The delays meant we had to suspend our delivery of healthcare to communities that have come to rely on us for their survival. The issue was finally resolved in mid-September and, thankfully, our assistance has resumed—but it was a tense, nerve-wracking time for us all.

Despite this, and despite the war and all else that makes life so difficult here, I try to forget the physical exhaustion and the emotional pain inside me that are now part of everyday life in Yemen. I try to be strong because, as a health program manager, I can’t be weak now. I have to show strength so my team can keep going. In truth, we need each other, because members of my team have become the source of my strength. And so together we keep going, emotionally drained by six-and-a-half years of war and suffering, facing a future that contains few signs of change anytime soon.

The war’s toll is hard to imagine. According to the United Nations, the number of war-related deaths in the country is moving steadily toward a quarter of a million, more than half of them stemming from indirect causes such as lack of food, adequate healthcare services and damaged or destroyed infrastructure. The conflict has left more than 20 million people in the country with no idea where their next meal is coming from. Nearly half of the country’s health facilities are either partly or completely destroyed.

The economy barely functions and severe shortages of food, medicines and other vital supplies and basic services have left roughly 80% of Yemen’s population in need some kind of emergency assistance. The destruction of health facilities, and shortages of skilled medical staff, medicines and other healthcare supplies have led to increased illness—a trend only exacerbated by the COVID-19 pandemic.

We experienced a glimmer of hope earlier in the summer when we received shipments of badly needed medicines and other medical supplies and equipment from partner organizations that strengthened our lifesaving health services and returned smiles to the faces of local residents who come for treatment at health facilities we support. These donations arrived at an especially important time, boosting our capacity to help local residents both through the critical work we do that is linked to good healthcare, and beyond that medical care, in areas such as nutrition, WASH, food security and livelihoods.

With the majority of the country’s health facilities operating either at reduced levels or not at all, the clinics that have managed to stay open are often overwhelmed by residents needing care. Countrywide, we support 39 static hospitals and clinics, plus three mobile health and nutrition teams that tend to focus on those forced by circumstance to live in hard-to-reach locations—often, families displaced either by fighting or a lack of food. 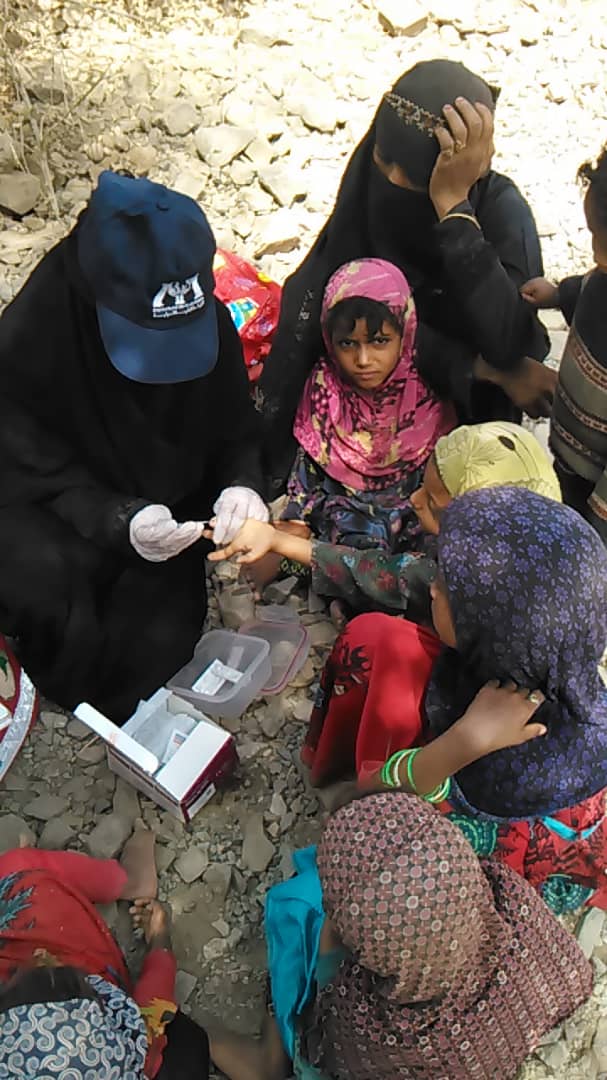 Testing for malaria in areas of rural Sana’a Governorate. 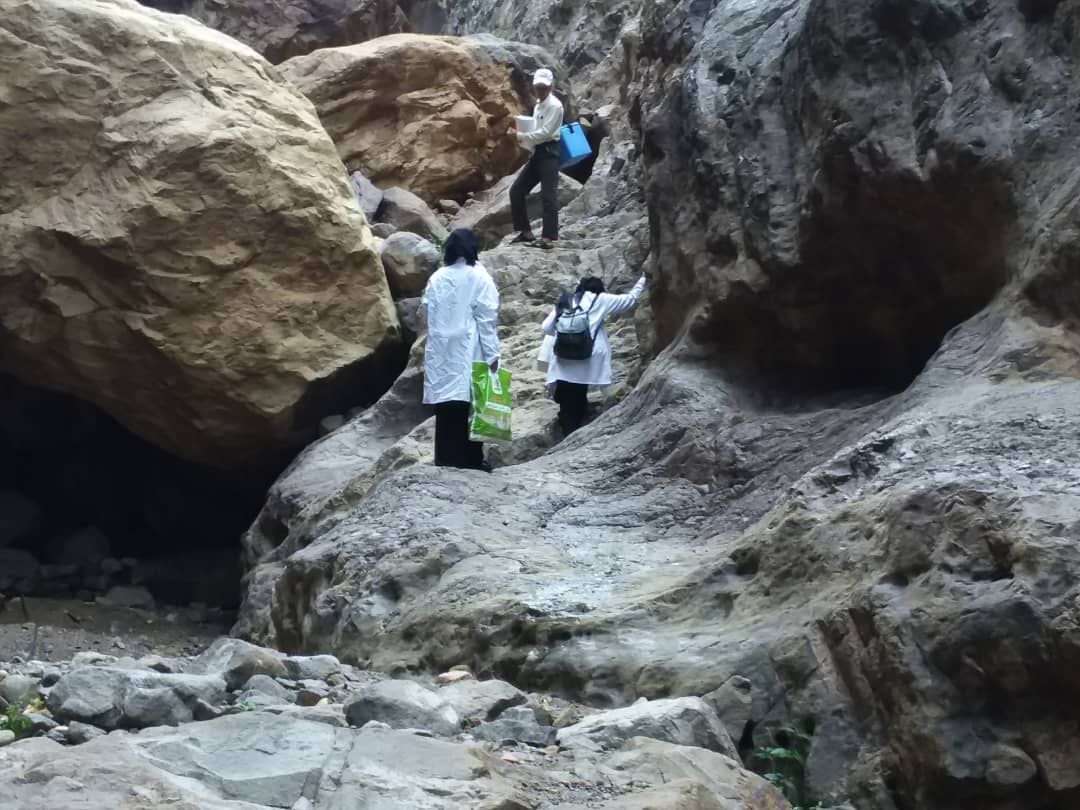 Our mobile medical team working in a rural area of Sana’a Governorate must navigate difficult terrain to locate and test for cholera members of a family displaced by fighting. Community health workers make their way to a family home to monitor residents for cholera.

Our partners’ donations, which include personal protective equipment (PPE), also protect our healthcare workers, who bravely continue treating patients through the pandemic. They are people like Moabar Mohammed Saleh, who works in the outpatient department in the Bani Mansour hospital, a big district-level facility that handles general medical cases in addition to mild and moderate cases of COVID-19. Reports on transmission of the virus by asymptomatic patients heightened Moabar’s own awareness and put his training to the test—so far successfully. He was especially grateful to receive the PPE, which will increase his own level of protection as he screens patients and others wanting to enter the hospital.

I think of Dr. Mamoun Ahmed Ahmed Al-Langi, manager of the Al-Walan Hospital in Sana’a, who told me that without the medical supplies and equipment we have provided, the hospital’s ability to continue offering care during the COVID-19 pandemic would have been in doubt.

And then there is Taqiah Ali Atien, a nurse on an ambulance team based at the Al Mukha Hospital, along Yemen’s remote southwestern coast about 170 miles from Yemen’s port city of Aden. Taqiah’s life has improved greatly since we provided the hospital with its first ambulance earlier this year, replacing ill-equipped and ill-suited private cars used previously. Recently, Taqiah was able to provide a seriously ill patient with intravenous fluids, while monitoring vital signs and gathering other medical data. Her work helped the hospital better prepare for the patient’s arrival and make quicker decisions about his care. The patient was treated successfully in Aden and has since returned to work in his home city of Al-Mukha.

It’s heart-warming to see. The real reward for our work is to be a part of efforts that support the emergency needs of those who are too often forgotten. It makes me feel good when I visit a destitute rural family in a remote village with no services and can reduce the pain of a child there. It restores my hope when I see the little one smile again. It also reminds me that I have no choice—I must keep going.

View next blog:
How Growing Up with Autism Created a Spirit of Advocacy and Service

View previous blog:
Facing Overwhelming Needs, One Life and One Family at a Time

Providing Relief to People Affected by the War in Ukraine Our team is expanding its relief efforts inside Ukraine...