In the scramble to contain a deadly Ebola outbreak spreading across Liberia and two neighboring West African counties with frightening speed in the late summer of 2014, an International Medical Corps emergency response team deployed quickly to confront the epidemic at its source.

As our team raced to complete a hospital-like treatment center in central Liberia’s Bong County dedicated solely to caring for those infected with the highly contagious virus, one of the many “must-have” items needed before the facility could accept its first patients presented a special logistical challenge: water.

“Water is critical to Ebola treatment,” recalls Dr. Adam Levine, an Ebola specialist and emergency medicine physician who helped lead the International Medical Corps response in West Africa. “With resources at the site being limited, and with trucking water into such a remote area very difficult, we had only one option. Before we could take in patients, we had to drill our own boreholes.”

Considerable research has gone into the fight against Ebola in the five years since the West African outbreak grew to become the largest ever, claiming more than 11,300 lives before it ended in March 2016.

The research yielded a promising vaccine as well as other potentially useful developments that led many communicable-disease experts to believe they now had the weapons needed to quickly eradicate future Ebola public health threats. Some believed that demanding logistical challenges, such as the need to supply large amount of safe water to remote, hard-to-reach areas, were now over. 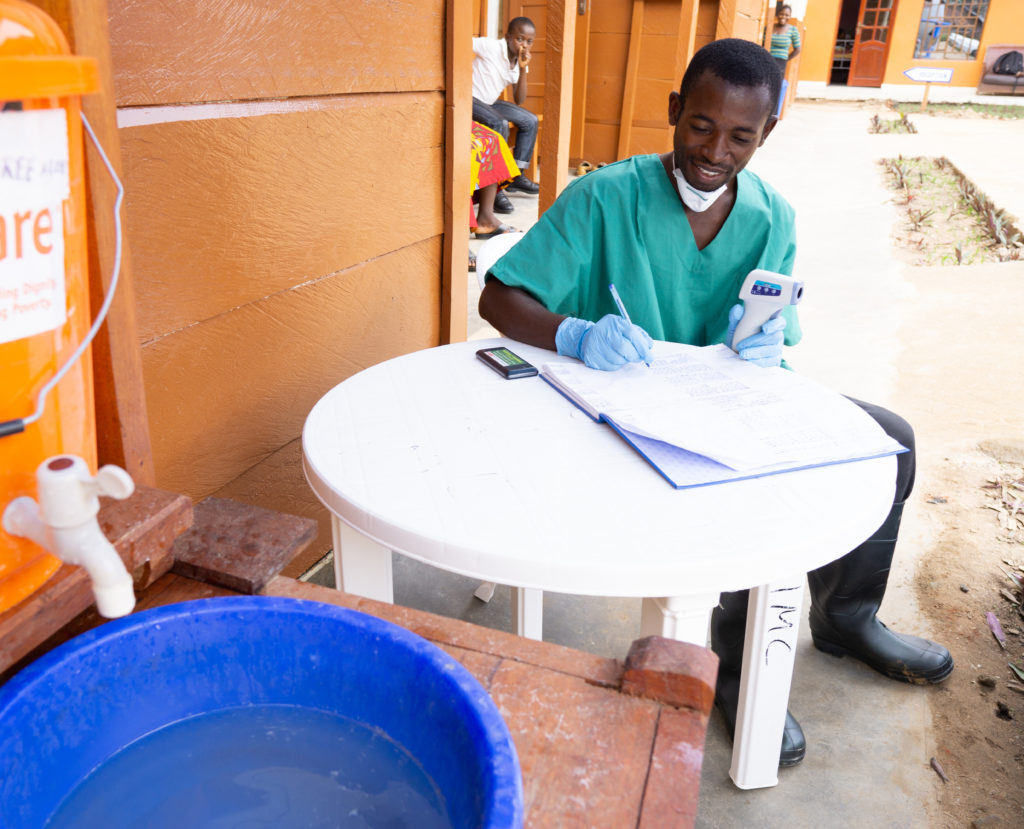 Sadly, it hasn’t turned out that way. Five years later, clean water—accessible around the clock, in large quantities—remains essential to Ebola treatment.

Today, in the Democratic Republic of the Congo (DRC), where we are working to contain the latest Ebola outbreak in the eastern provinces of North Kivu and Ituri, a treatment unit built and operated by International Medical Corps must have a minimum of three days of water stored at the facility at all times.

Water’s role in Ebola treatment goes well beyond the demanding task of keeping the patients hydrated as they endure to the acute vomiting and diarrhea the virus typically triggers. Water also plays an important role in enabling the staff to keep the facility itself scrubbed down and clean, and—more important still—themselves safe from exposure to the deadly virus.

This is especially true in a treatment unit’s high-risk zones, where patients live and where all staff must wear cumbersome personal protective equipment (PPE) to keep themselves safe.

Water also is essential for the safe handling and disposal of Ebola-contaminated human waste, and for adhering to the strict procedures essential to maintaining safe hygiene. And physicians and nurses leaving high-risk areas after their shift must be followed by infection prevention and control (IPC) teams who use spray wands connected to canisters of chlorinated water on their back to disinfect every footstep taken until the healthcare workers’ boots are removed, sprayed and quarantined to dry. 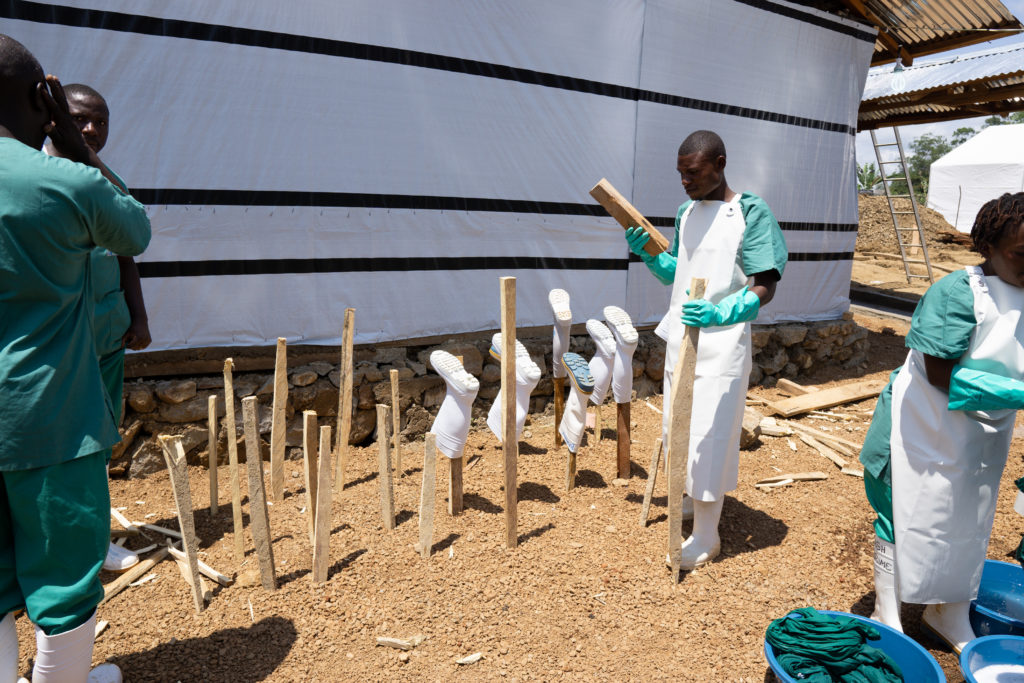 Boots are just one part of the protective equipment medical staff must wear to remain safe. When fully dressed to treat patients, physicians and nurses look more like spacewalkers than healthcare professionals on a dangerous errand of mercy. And every piece of that equipment—including head cover, googles, the suit itself, gloves and boots—must be cleaned, disinfected and dried after each use.

The equipment is so stifling to wear in the hot, humid climates of Africa’s equatorial regions where the Ebola virus can thrive that the recommended shift length for medical staff is just 40 minutes. Levine estimates that, during the 16-month long outbreak, the Ebola treatment centers in West Africa consumed about 150 liters per day of water for each patient, and another 85 liters per day for each member of staff. 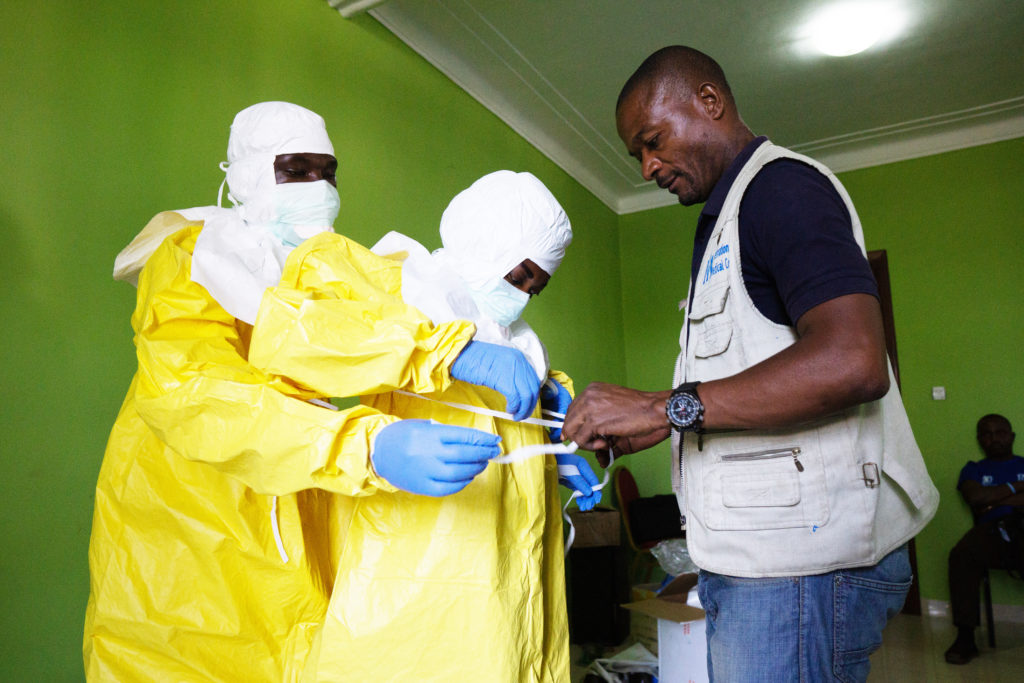 Water, sanitation and hygiene specialists estimate that the daily water needs for an Ebola treatment center today are even higher—as much as 400 liters per bed—to treat patients and maintain the level of infection prevention needed to keep all staff and areas of the treatment facility safe. To ensure the highest levels of care and conservation, we disinfect all incoming water supplies and adjust water quantity when appropriate.

In the eastern DRC, where the world’s most recent Ebola outbreak began in August 2018, more than 1,600 confirmed new cases had been reported by mid-May 2019. More than 1,000 of those cases have been fatal.

As it was in West Africa, International Medical Corps is in the thick of this fight, operating a 20-bed Ebola treatment center in Ituri Province, training local health workers and operating more than 30 screening and referral units built adjacent to existing health clinics. These facilities screen all who enter for the signs of Ebola, then referring anyone with a fever for further examination.

Already the second-largest Ebola outbreak ever, it has shown little sign of easing despite thousands of vaccinations provided to those at potential risk.

“There’s a lot of hope placed in one new technological development—the vaccine—but one piece can’t do it alone,” Dr. Levine says. “More scrutiny, more research is needed. There’s no sign that the vaccine is the magic bullet.”

Experts say there are several factors that have diminished the vaccine’s impact. Some note that vaccines are often less effective over time than they appear in their first trials. Then there’s the armed violence between government forces and an array of different militant groups operating in areas of the outbreak, which has also disrupted vaccination campaigns.

Finally, efforts have been compromised by a deepening suspicion among area residents of health workers’ motives. Suspicion of outsiders among residents in Ebola-affected areas has fueled a reluctance among locals to cooperate with authorities involved with the important but arduous task of plotting the chain of Ebola infection—tracing, finding and quarantining contacts to limiting public exposure to the virus.

“Vaccines are only effective if you can vaccinate,” notes Levine, “and there are obstacles to that in the DRC.”

As the death toll in the DRC Ebola outbreak continues to rise, it appears clear that the kind of low-tech efforts that helped end the West African outbreak in early 2016 remain crucial to the fight against the virus today in the DRC.

“We were so effective in West Africa because we had all the components working well together,” Levine says.

Few of those components are more critical to preventing and controlling Ebola infection than water.

Five years into one of the most severe humanitarian crises in the world, South Sudan is faced with yet...

Safe, clean and reliable access to water and sanitation services remains an urgent, global challenge, with more than 1...

Alaa is a 14-year-old Syrian refugee who lives in a small village in the Bekaa Valley. When Alaa’s family...