Yvonne Groenhout, an intensive-care unit (ICU) nurse for 26 years who has served on the frontlines of the battle against COVID-19, is familiar with death and human suffering. Though nothing could quite prepare her for the past year and half, the most surprising—and in many ways, saddening—part to her about the pandemic has been the division she has seen in her country throughout this time. “I always thought that we come together in the US for the things that really matter—that’s what always happens in the movies, right?” says Yvonne. “But to see, instead, how easily people wanted to stay apart and pick a side, rather than come together—that’s been the hardest part for me.”

In a pandemic that been wildly polarizing and divisive, Yvonne’s rare solace has been the unity she found in the heartbreaking wards of overwhelmed hospitals, where frontline health workers had to come together to survive an unprecedented health crisis.

Despite everything, even in the hardest parts of the hospital, people are willing to come together. So, that kind of gives you a little lift.

Nevertheless, the pandemic has been emotionally, physically and spiritually taxing for frontline workers like Yvonne, who embodies both the weariness and hopefulness that many of us now carry.

Born and raised in Las Vegas and a resident of Salem, Oregon, today, Yvonne was working as a critical-care and outpatient wound nurse when the pandemic started in March 2020. Despite having a large population of elderly people, her community was relatively spared in the beginning, in contrast with COVID hotspots on the east coast. Wanting to go where her skills were most needed, she decided to volunteer with International Medical Corps and was deployed to Chicago. 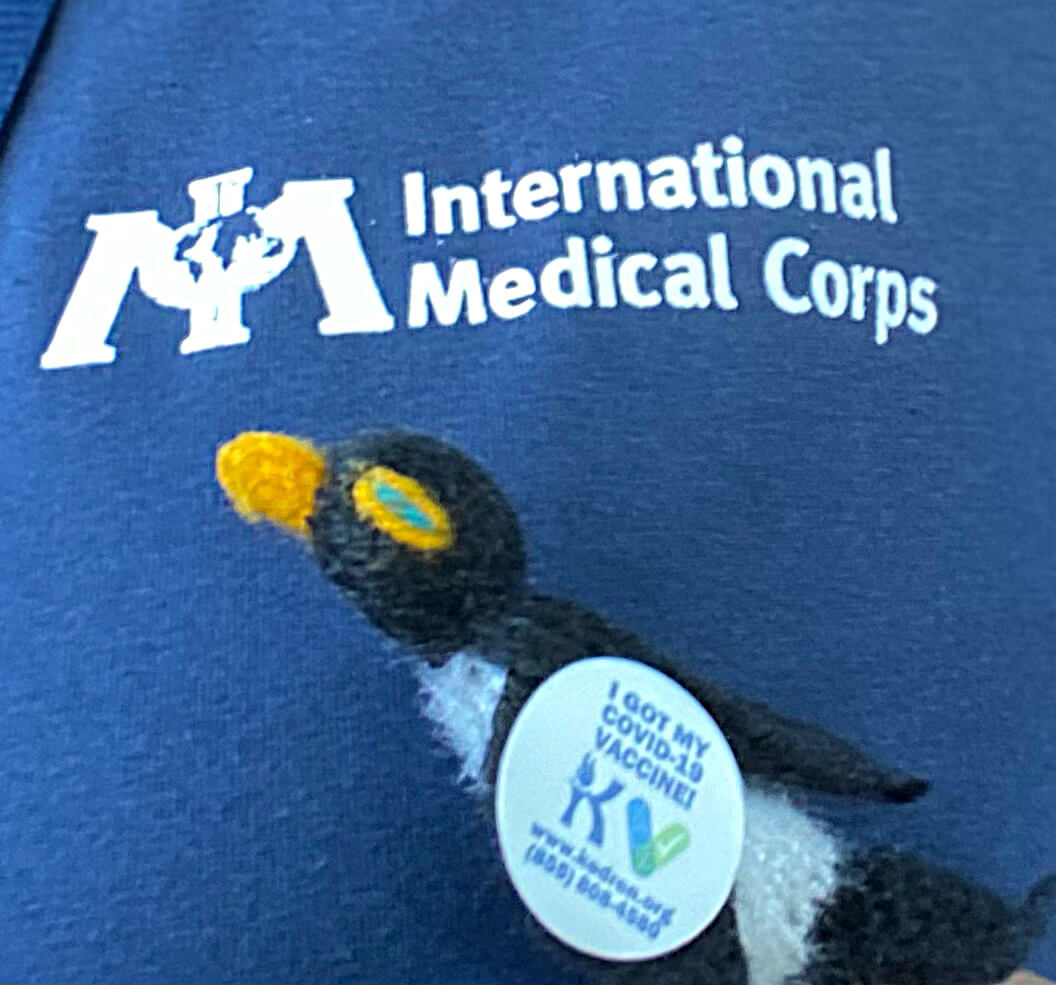 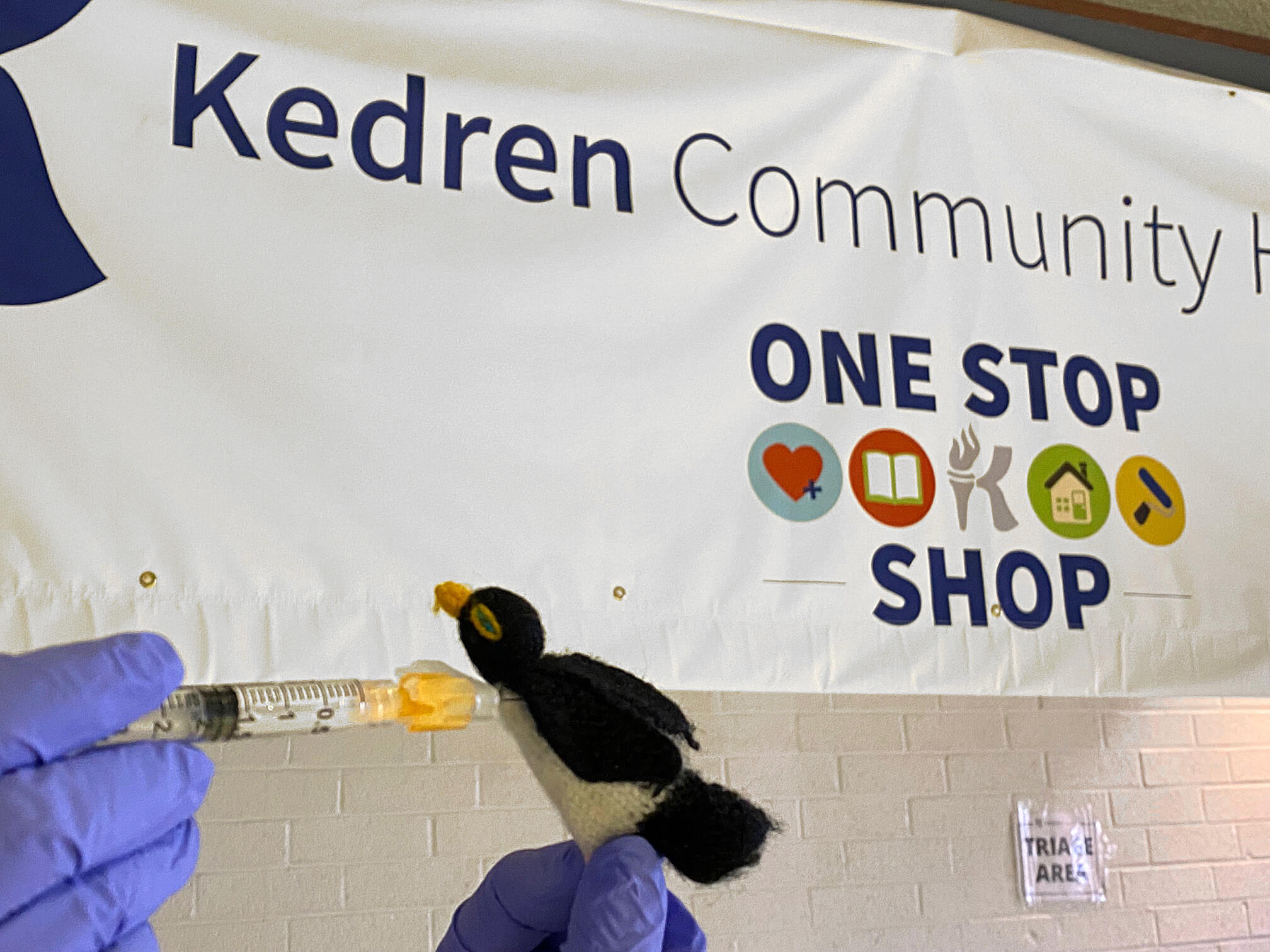 Since Yvonne does not like posing for the camera, she and her husband take Pengui the penguin all around the world with them. Here, Pengui receives his vaccine at Kedren Community Health Center.

Yvonne and her fellow volunteers worked in Chicago’s Ingalls Memorial hospital, located in a very low-income neighborhood in the heart of the city. “It was devastating,” says Yvonne. “I don’t know if it was because they were afraid to go to the hospital, but so many patients would not come in until they were extremely sick,” says Yvonne. “By then, it would almost always be too late.” The staff and volunteers treated many patients, but the outcomes were very poor—a fact made worse by the fact that this was during a time when they could not even allow visitors into the hospital to say goodbye to their loved ones.

“We’re Here to Help You”

International Medical Corps erected large tents outside the hospital to create critical extra space for patients, and provided lifesaving personal protective equipment (PPE) to hospital staff. But it was the extra staff provided by International Medical Corps that proved the most valuable to the hospitals we helped. At first, wary and exhausted hospital workers did not know what to think of the International Medical Corps volunteers. “They would say, ‘You’re here just out of the kindness of your heart?’” remembers Yvonne. “And we’d say, ‘Yes, we’re here to help you; you can rest now.’” Yvonne, who stayed for about two-and-a-half weeks, says that by the time she left she could see the difference that she and the other volunteers were making in the lives of staff members who were now incredibly grateful.

When Yvonne returned to Oregon in early summer 2020, there was just a trickle of COVID cases coming into her hospital. But the following fall and winter were “so awful,” she says. Her ICU was fully converted to a COVID unit, and constantly at full capacity—with dire patient outcomes. She and her colleagues would work desperately to keep patients alive and, just when things would start to look up, they would “go down again,” she remembers. This time, however, they could at least allow family members to come into the ICU (in full PPE) to be with their loved ones—but she only saw a few patients make it out of the ICU.

“I’ve had a lot of personal tragedy, so for me, I can compartmentalize that pretty well,” says Yvonne. “But still, it was very hard.” She saw a lot of the young nurses in her unit struggle with the unprecedented devastation, and tried her best to support them. “It’s difficult when you work so hard and get attached to your patients, and see them with their ups and downs, and then—no matter what you do—they don’t make it,” says Yvonne. Still, she knew she was part of something truly historic and that she had the right skills at the right time—and it gave her comfort at least knowing that she was doing all she could to help.

A Strong Desire to Serve

Yvonne has always been driven to help those who need it, but it was a devastating loss in her own life—the death of her oldest daughter five years ago—that ignited an even stronger desire to serve. “That was the catalyst for us,” says Yvonne. “My husband and I were just like, ‘What are we doing?’” He quit his private practice to start working for Indian Health Services, helping Native Americans, and she committed to doing more volunteer work. So when the next call from International Medical Corps came—this time seeking volunteers to support mass COVID-19 vaccination efforts in Los Angeles—Yvonne “jumped at the first chance” she got.

In May of this year, she spent two weeks volunteering with International Medical Corps in south-central Los Angeles, vaccinating a low-income population of mostly non-English speakers through Kedren Community Health Center. She encountered much vaccine hesitancy among the population, and relished the opportunity to help educate.

It’s just getting them to realize that they can come in at any time, they don't have to wait and it’s free. There’s no reason to be hesitant.

As a health professional, Yvonne has been surprised by how much vaccine hesitancy persists across socioeconomic lines in the US, even among her own family and friends. “I say to them, ‘I can tell you about all the people that I’ve seen horizontally instead of vertically, and it’s so much better to see you walking and talking than not. So if I can keep you out of that position and out of that situation through a vaccine, let’s do that instead,’” she says.

During her first week at Kedren, Yvonne vaccinated a lot of elderly people. The second week, to her delight, many of those same people brought back their children and grandchildren. Her favorite part of the vaccination efforts has been vaccinating young people. Yvonne recalls asking one girl if she was excited to get the shot and the girl answering, “Not really, but if it means I can have a slumber party again, I’ll do it.” Says Yvonne wistfully, “And I thought, ‘Oh yeah, I remember slumber parties.’” She, like many, enjoys thinking about a “return to normal” post-COVID, and believes there’s a light at the end of the tunnel. But she also knows that “we’ve still got a lot of work to do.”

As she heads into semi-retirement, Yvonne plans to do more and more volunteer work with us. “International Medical Corps is so highly organized, and they recruit the very best volunteers,” she says. “We show up and they keep us together, make us feel important and provide so much support.” It’s here, in her volunteer work, that Yvonne has found the unity and community she still sees lacking in the country at large. “It’s great to be around people who have a similar calling,” she explains. “I just want to serve the underserved and do whatever I can to make a tiny bit of difference in the world—and International Medical Corps lets me do that.”

To learn more about our COVID-19 response worldwide, visit https://internationalmedicalcorps.org/covid19.

When Mount Nyiragongo erupted last May in the Democratic Republic of the Congo (DRC), destroying more than 1,000 homes...

In many countries where we work, the COVID-19 pandemic has overburdened healthcare systems that were already ill-equipped to care...