What do medicine and mountain climbing have in common? The wrath of nature, the threat of death—and the courage to face both, according to Dr. Michael Paterson, an affable and driven 25-year veteran of the emergency room. “Emergency medicine incorporates a lot of the philosophies of wilderness exploration and adventure,” he says. “You have to be able to respond to whatever’s happening in front of you in the wilderness, whether it’s an avalanche, a flood or an unexpected snowstorm that traps you at the top of Denali for a week.”

Having survived Denali in that life-threatening snowstorm, Dr. Paterson is now challenging himself to another feat that few have accomplished: summiting Mount Everest. He is attempting to climb the 29,032-foot mountain without supplemental oxygen, which—at the age of 64—would make him the oldest person to do so if he succeeds. Along the way, he is raising money for International Medical Corps, in an effort to tie together his greatest loves: emergency medicine and wilderness adventure.

The Winding Path to Humanitarian Relief

Born outside of Chicago and raised in Annapolis, Maryland, Dr. Paterson found his way to medicine later in life than most. After graduating high school in 1974, he spent several years working blue-collar jobs—first as a construction worker at 17, later as an oyster diver on the Chesapeake Bay and finally as a machinist in northern Michigan, where he skied to and from work to his cabin in the woods. At the age of 29, looking for a change, he returned to education and began attending Northwestern Michigan College, in Traverse City. “The fondest memories I have of school were at that small community college,” he says. “Our science professors were the greatest and I fell in love with the sciences—physics, chemistry and biology.”

After deciding that medicine would be where he could make the biggest impact, he dedicated himself to schoolwork, getting his bachelor’s degree in three years and gaining acceptance into all three major medical schools in Michigan. After graduating from the University of Michigan, he did his emergency medicine residency at Beaumont Hospital in Royal Oak. “I chose emergency medicine because I’ve always loved the outdoors and exploration, and emergency medicine shares a similar immediacy and practicality,” he says. “Most ER physicians aren’t too interested in the biochemistry of a strange disease or the latest theoretical advantage of another complex treatment that may someday work—they want to know ‘How can I save this person’s life?’ or, failing that, ‘How can I relieve suffering?’”

Dr. Paterson had his first experience with international medicine in 1993, when he embarked on his last rotation as a fourth-year medical student at a tiny jungle clinic in Honduras on the border of Nicaragua, right after its revolution. He treated some refugees, but most of his patients were Miskito people living in a remote village with no electricity at their local clinic, no surgical capacity and just a tiny dirt air strip for evacuating more serious emergencies. “There were various traumas and infectious diseases, and life was hard, short and brutal for most people, but they were generally happy, and grateful for what care we could give them” he says. “I learned a lot about how to work in situations with fewer resources, and about how they lived their lives and how they dealt with death.”

Though Dr. Paterson fell in love with the challenge of working in difficult settings without the latest technology, it would be many years before he returned to international medicine. In the meantime, he met his wife, Patricia, at Henry Ford Hospital in Detroit, where she worked as a breast cancer researcher. After Dr. Paterson finished his residency in 1996, the couple moved to Colorado, where they raised their two children, Gabriela and Luke. Dr. Paterson then worked as an ER physician and hospice director for several years—until 2011, a year after the catastrophic Haiti earthquake, when he found himself on a ship to Port-au-Prince.

The Importance of Honest, Compassionate Care

Volunteering with MediShare in Haiti, Dr. Paterson was once again impressed by how much he learned from the local people and local nurses, and how much they were able to provide medical care with so few resources. He returned to Haiti several more times, then started participating in responses to various disasters around the world, including the Philippines after Typhoon Haiyan (Yolanda), Puerto Rico after Hurricane Maria, Kurdistan during the fight against ISIS, and Sierra Leone and Liberia during the West Africa Ebola epidemic. 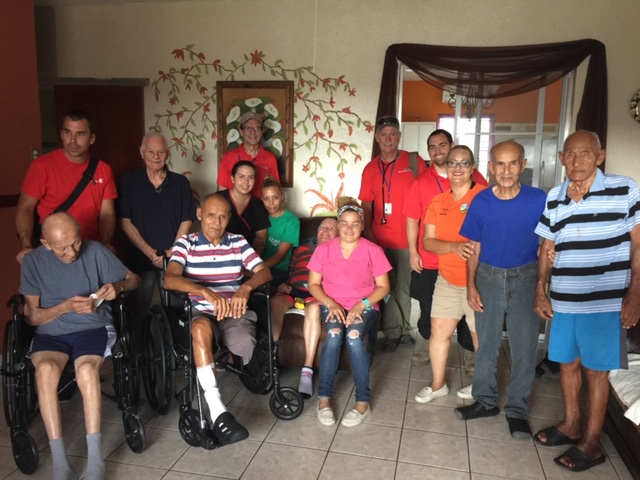 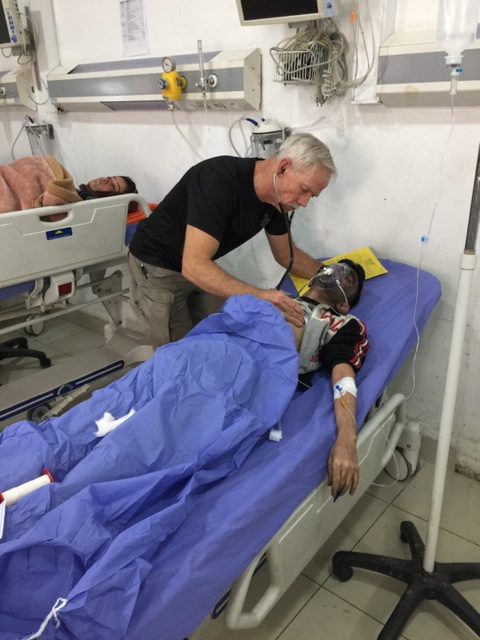 Dr. Paterson treats a Peshmerga soldier who had suffered a blast injury and was severely burned in the 2016 fight against ISIS in Duhok, Iraq.

In each of those places, he ran across International Medical Corps—and found himself repeatedly impressed, he says, by the organization’s professionalism and expertise. “I noted that they were always at the very top of all NGOs during an emergency response, and felt like that was the kind of organization I wanted to work with,” he explains. So in early 2020, when he realized that COVID-19 was becoming a worldwide pandemic, he knew whom to call.

Dr. Paterson deployed with one of the first International Medical Corps volunteer groups to respond in New York City, back when the city was overwhelmed by the pandemic. He worked at Flushing Hospital in Queens, a public hospital in an underserved neighborhood that was operating at levels way beyond its capacity. At the time, it had 10 ER staff out sick with COVID and about 70 patients in a 15-bed ER.

While he and medical colleagues worked around the clock in the ER, additional International Medical Corps staff set up tent units outside the hospital to handle patient overflow. “The hospital was doing the very best it could, but we had very little personal protective equipment at the time, and were reusing N95 masks for a week straight,” he remembers. “But the hospital was very grateful for our help, and I felt we were as safe as possible with the incredible people at International Medical Corps having our back.” 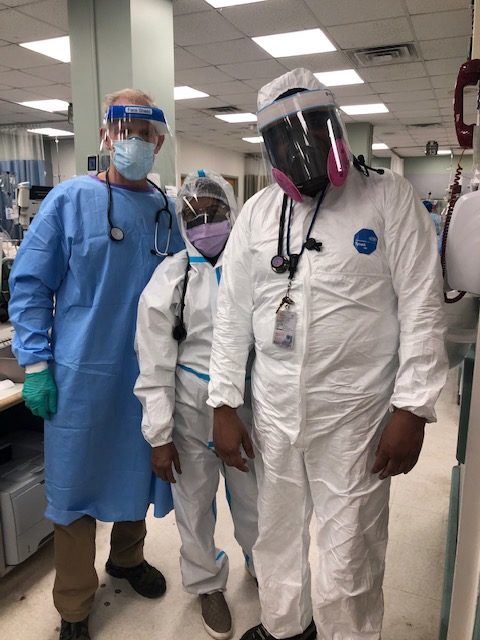 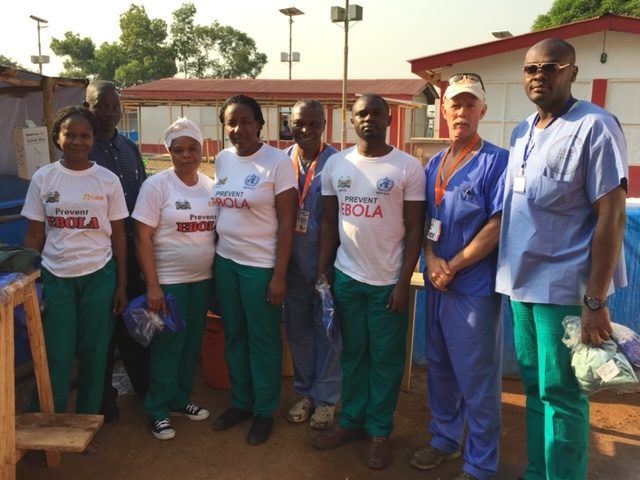 Volunteering in Sierra Leone as part of the Ebola response in West Africa, Dr. Paterson poses with members of the African Union Medical Team after helping open a new Ebola treatment center.

As it turns out, Dr. Paterson was especially prepared for the unique challenges of treating COVID-19 patients—his time fighting Ebola in Sierra Leone had taught him the importance of following strict infection-control protocols. In addition, he says, “in emergency medicine, international medicine and hospice care, we see people who are terminally ill quite frequently—people who are beyond our ability to save, but who still need our compassion and care. In New York City last April, so many people were dying of COVID-19 that sometimes all we could do was provide comfort care through pain relief, a loving touch and a chance for family members to say their goodbyes over the phone.”

The ability to provide comfort in one’s final hour is “a very important part” of what nurses and physicians are doing across the country today in the face of this deadly pandemic, he says—and it is this honest, compassionate care for the dying that he is determined to make part of emergency medical training worldwide.

After volunteering in New York, Dr. Paterson returned to Colorado—retired and, like millions of others, stuck at home during a lockdown. Having already summited four of the “big seven”—the tallest mountains on each of the continents—he set his eyes on Mount Everest and decided to make his climb a fundraiser for International Medical Corps, having just witnessed firsthand the impact of its emergency response work. 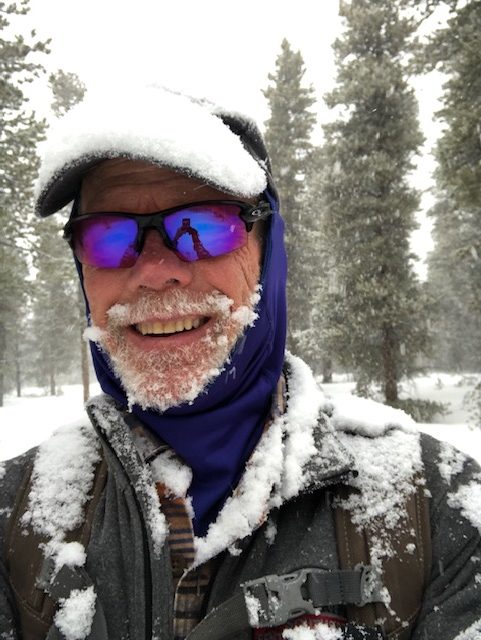 Dr. Paterson training in Colorado for his upcoming Everest climb. His weekly workout includes skiing for 10 miles at an elevation above 10,000 feet. 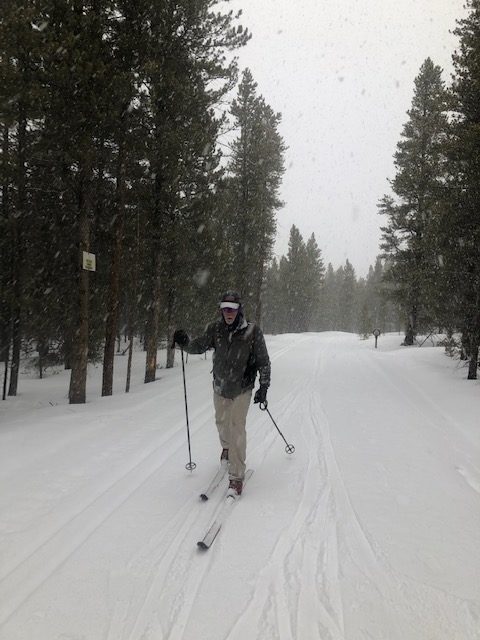 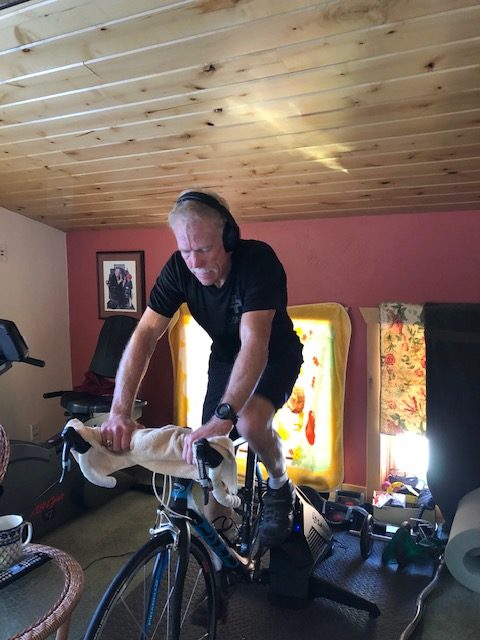 Dr. Paterson on his training bike at home, part of his training regimen as he prepares to climb Mount Everest.

He spent the rest of 2020 training more than 15 hours per week—mountain biking, hiking and climbing with progressively more weight in his backpack, cramponing up ski hills, cross-country skiing at heights over 10,000 feet and taking high-intensity interval training classes with a gymnastics instructor—a regimen that he has recently ramped up to 20+ hours per week in advance of his April 2021 climb.

Having received an ankle replacement a few years ago, Dr. Paterson knows the significant challenges that lie ahead. But he is determined to make it to the top of Everest despite his age and prosthetic ankle—and with his determination to do it without supplemental oxygen. When he gets there, not only will he have achieved an extraordinary personal goal, he will ensure that he made the journey—like much of his life—in service of others.

Dr. Paterson has promised to take others along on his journey to and from Everest, documenting his training, travels and travails.

To follow that journey, and support his efforts to help International Medical Corps respond to conflict, disease and disaster worldwide, click here

Mental Health Care in Jordan Is Just a Click Away

A woman we’ll call Samah is a 38-year-old Jordanian working at a local university. She is divorced and lives...