In Kenya, a woman is burdened with the important chore of collecting, managing, transporting and storing water. This can be an incredibly challenging task in Samburu County in northern Kenya, one of the driest areas of the country often plagued by water shortages. Sometimes it will not rain for an entire year in the region. The land is desolate, exposed and sparsely populated. Without access to running water, a woman must walk to the closest natural water source many kilometers away, in fact the average distance a woman walks in Africa to collect water is six kilometers. Then, she must carry the heavy water all the way back, sometimes with a baby strapped to her back. Women in Africa on average carry 20 kg of water on their heads when they walk back from the water source.

Scola Letena, a housewife in Samburu County, only has access to one viable water source, the Nukutoto spring located in the mountains.  She must travel a great distance, particularly in the dry season, to fill up her jerrycans. However, when the water in the spring dries up she must go much further to another town 11 kilometers away with her donkey and eight children to fetch water. When this happens, her children miss school. Given the severe drought that is currently afflicting East Africa, the spring dries up often and the children miss more school. When the spring is producing water, Scola must make the arduous hike up the mountain while avoiding wild animals who also drink from the spring. Scola says, “I usually come early in the morning to fetch water. In the morning I can manage to fetch ten liters while in the evening only five liters can be found because of competition with wild animals.” Scola’s aging neighbor, Naonkota, complains that she cannot carry as much water as the younger women. Despite her age and weak knees, she is still responsible for the water in her household and she says, “Walking uphill is very difficult for me. Even if I make it to the source, I can only manage to carry back a… jerrycan (5 liters) of water.”

Not only must Scola and Naonkota avoid leopards and poisonous snakes on the trip to the spring, but the water could be contaminated. Elephants are known to muddy the water and baboons defecate in the water. Contaminated water leads to high risk of contracting waterborne diseases such as diarrhea, cholera and typhoid. A small-scale cholera outbreak resulted from this spring in 2013 because residents had no other choice than to drink this water. Diarrhea is responsible for almost 7.7% of all deaths in Africa.  Water is life, as the saying goes, and in Kenya when that water is contaminated, it can also mean death.

International Medical Corps, with funding from Brighton, has started to address the dire situation and access to water in Nkutoto by building a concrete shelter at the source to protect the spring from contamination and laying a series of pipelines to bring the water down the mountain and into the village for easy access.  With the newly constructed water tap, the women of Nkuoto village do not have to walk up the mountain, often with their livestock and children in tow, to collect water. A town elder, Situelia says, “This has ensured that our women are safe from wild animals while the water is also being used to sate our livestock.”

The lack of access to clean water affects women all over Samburu County. Silango is a remote village about 20 km from Wamba town that can only be accessed via unreliable public transportation on rough, unpaved roads. Silango, like Nkutoto, is burdened by chronic drought and disease. Recently, International Medical Corps spent about a month building the Silango sand dam, an innovative technology for harvesting rainwaters and providing a community with clean, reliable water. Previously, women of Silango had to walk seven km from the nearest road to the closest water source. The sand dam is now less than 500 meters to the village and saves women an enormous amount of time and energy. The sand dam collects and stores rain water and prevents the water from evaporating during dry season. The sand filters the water which helps prevent waterborne disease. The sand dam is also tapped and directed to the health center, the school and the outdoor market. International Medical Corps has installed a hand pump to provide access to potable water for the community and also built cattle troughs. 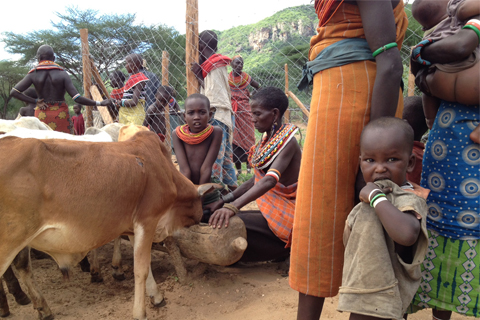 Susan, a mother living in Engilae, another village in Samburu county where International Medical Corps is working, says before International Medical Corps began its sanitation projects in Engilae, the maternity wing at the health center was not operating at optimum levels due to lack of an adequate water supply. The nationally recommended supply for a health center in Kenya is 10,000 liters per day. The women had to walk a distance of 2 km to the Ngeng’ river to fetch water and carry it uphill to use at the health center; bringing 10,000 liters from the river everyday was an impossible task. There was never enough water to treat patients properly and it was often contaminated. This was the water used to clean mothers on the delivery beds. Now, International Medical Corps, with funding from the Office of Foreign Disaster Assistance and Brighton, have establish a successful water and sanitation project at the health center including building latrines, promoting good hygiene practices, and most importantly creating access to a water supply, water storage and distribution facilities. Susan says that incidences of maternal and child health problems are decreasing thanks to the delivery of necessary services.

In an effort to unite women in Kenya in their shared burden over water chores, International Medical Corps has trained local women to form Mother to Mother Support Groups. Susan founded such a group in Engilae. In this group, Susan educates other mothers about important water and sanitation practices. She says, “International Medical Corps has shown us how to use baby pampers. Previously it was very embarrassing for us especially when the baby soiled its clothes. We usually dispose the Pampers by dumping in the pit latrines or burning,” she says. “We have also learnt how to use baby napkins. They are very good because one can use them several times after washing them.”